Art of Redemption: One man's escape from death row 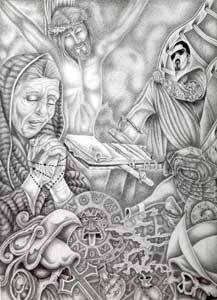 While sitting at the defense table in a federal courthouse, I listened intently, with tears flowing, as the father of the man I was on trial for killing spoke. From the witness stand he read the last letter he would ever receive from his son. That is when I realized that my actions had stolen the life of a son, a brother, an uncle, and that nothing I could ever do could repay those whom I have harmed. I have never been able to explain my actions or why I killed Andrew Marti. No words can explain the taking of a human life. Each day I live with what I have done.

I sought forgiveness from Andrew’s family and from God. I received both, but forgiving myself has not come easily. However much time I have on earth will be spent trying to make amends for the pain I have caused. Forgiven, I am no longer the man I once was. And because I cannot undo my past, I do what is possible from where I am. I have taken up art.

The following facts detail my criminal past. While an outpatient at the drug treatment unit of a large medical center in Oklahoma City, I took two people hostage at gunpoint. The incident took place in the emergency room and ended after the local SWAT team overpowered me; no one was hurt.

My treatment for PCP usage and addiction ended, and I was carted off to jail. After several months, I pled guilty to robbery, kidnapping and pointing a deadly weapon, for which I was sentenced to 22 years. The robbery occurred prior to the hospital incident, when I broke into a farmhouse and stole various items while the occupants were eating dinner. It was considered a robbery because people were at home when it took place.

I escaped twice from state prisons in Oklahoma. The first escape resulted in an additional 10-year sentence. During the second escape in 1983, I robbed and shot a former prison inmate who had raped me in prison. He recovered from his wounds and testified against me. I was sentenced to a consecutive term of 1,200 years. At age 25, having spent 74 days as an escapee, I found myself serving 1,232 years in a maximum-security prison.

I was transferred to the Federal Bureau of Prisons and confined at the U.S. Penitentiary/Allenwood, in White Deer, Pa. There, in 1996, I killed my cellmate Andrew Marti by strangling him. I pled guilty and was sentenced to death. I have spent nearly 32 years in incarceration (since January 1978).

Creating art does not come easily for me. I don’t particularly enjoy drawing or painting, but at times feel compelled to express myself on paper or canvas. I have had no formal art training or schooling. Whatever artistic talents I possess I consider God’s gifts to me.

I have noticed over the years that my work often reflects the mood I’m in while creating it. I tend to become totally absorbed as a drawing materializes. It is as if with each line or shading, I am leaving more than ink or paint; I am leaving bits of myself. Since each piece is filled with meaning and emotion, the process can be exhausting.

After being diagnosed with diabetic retinopathy, an eye disease that can lead to blindness, one of my first thoughts was that I would no longer be able to communicate through this medium. That is a very frightening prospect. I know that being physically free is something I will never experience again. Creating art provides me with a sense of freedom, a way of escaping the steel and concrete jungle that surrounds me. This outlet also allows others to view and experience my world.

The drawing pictured here (pg. 17) came about from my memories of the execution of Juan Raul Garza, who was convicted and sentenced to death for his involvement in several drug-related murders. On June 19, 2001, he became the second person executed by the federal government in the modern era of capital punishment. Eight days earlier, a federal executioner had ended the life of Timothy James McVeigh, as worldwide media correspondents reported in vivid detail each step of his demise. Garza’s execution garnered little attention beyond the local area. Executions by lethal injection have become almost commonplace.

Garza was a Mexican-American man, born and raised in southern Texas, where he attended Catholic schools and practiced his Catholic faith. On the day I was received into the faith and received my first Communion, Juan Garza, in the next cell, received the same sacrament. Garza was a father, husband, brother, uncle and son, and he was a friend to many. He led a law-abiding life while working for the railroad for many years. He was no saint, but his life, like all other lives, was sacred. An executioner took his life in the name of the people of the United States.

I remember that Jesus was a victim of capital punishment by order of the government. The type of gurney used in lethal injections, where the condemned lies face up with arms outstretched and bound with straps, is reminiscent of a crucifixion. Poison flowing into Juan Garza’s veins disregarded the sanctity of his life in the name of justice.

When I turned 50 a year ago, I experienced a deep state of depression for several weeks. Depression is not new to me; living in a unit with 47 other men who have all been condemned to death is a sobering existence. Still, God has blessed us with the gift of life and an ability to overcome obstacles. God showed me that while I was in the midst of depression.

Wherever It Is Found

I have been involved in a project for the last eight years, where my artwork is made into holiday cards that are sold to raise funds for children who have been abused or are at risk of abuse. Each year I receive letters and notes from people who have received the cards and from the organizations that have received the sales proceeds. Last October at mail call, the highlight of my day, I received a large envelope from the St. John Bosco Children’s Home in Mandeville, Jamaica. This is a child care facility sponsored by the Sisters of Mercy that has received funding from the card project. I found a long letter and drawings from the boys at St. John Bosco, made for me as a thank you. The feeling in my heart and the tears in my eyes at their simple acts of kindness reminded me that God connects us all in many ways. He connected me with these Jamaican boys through art—drawings made with crayons, colored markers and pencils.

Art is not always found on the walls of museums or in private collections. It can be found in the expressions of an inmate on death row or an orphan in a boys’ home. Wherever it is found, art has a way of connecting the world.

David Paul Hammer is an inmate on federal death row in Terre Haute, Ind. He is a Providence Associate with the Sisters of Providence of Saint Mary-of-the-Woods, Ind.

Show Comments (
2
)
Comments are automatically closed two weeks after an article's initial publication. See our comments policy for more.
Michael Cremin
12 years 7 months ago
I'm not sure what I am supposed to take away from this article. A convicted murder is bemoaning the death penalty from death row? After serving more than thirty years in prison, the author is now filled with faith? Art as therapy? What was the point of this story? Perhaps the next article can be about how the family of the man he murdered feels about art. I am opposed to the death penalty because it is administered unjustly in this country, but I do not believe in giving murderers a forum to discuss their feelings. Having lost a family member to violent crime, I would like to suggest that America Magazine focus more on those who have been the victims of crime, and less on the perpetrators.
Richard Sullivan
12 years 7 months ago
I loved reading this article. The title tells it all. It is about redemption. David Paul Hammer's life was turned around. He asked for and received forgiveness from the family of the man he killed, and he changed.
We pray for forgiveness as we forgive others. If we cannot forgive does it means that we are in no need of forgiveness?
It seems to me that the whole penal system should be built upon the principle of forgiveness and redemption not punishment nor vindictiveness.