Demystifying Medicine: The tensions between faith and science in West Africa

Demystifying Medicine: The tensions between faith and science in West Africa 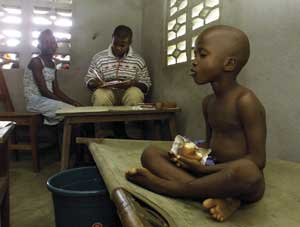 Georges Bernanos began his novel The Diary of a Country Priest with the words of the curate: “Mine is a parish like all the rest.” While this characterization may have been accurate for a parish in rural France, it is not true here in Liberia. For the past eight months, as I have ministered to the faithful people of God in Holy Family Parish in Caldwell, outside of Monrovia, I have had a growing awareness that some of my faith judgments may not be the same as those of my parishioners, in part because I come from Canada and am not African.

Last September, as I presided and preached on the feast of the Exaltation of the Holy Cross, the first reading from Nm 21:4-9 required careful handling. The striking image of a bronze serpent with healing power in the desert would resonate well, I thought, among the people, many of whom still carry fetishes or magical amulets to ward off negative powers, known here as juju. My worry, though, was that I might be understood as saying that the cross is simply another powerful and effective juju, which is not what I meant.

Around the same time I visited a seriously ill parishioner in the Catholic hospital in Monrovia. She was in a catatonic state from which she never recovered. The clinical diagnosis was meningitis, but many members of her family and some fellow parishioners believed the problem had to do with her late twin brother, who had died the previous year. Since she was his twin, West African traditional beliefs called for her to be physically lifted up by family members after his death and passed over his corpse; then there would be a ritual bath for her. The purpose of the ritual was to counteract her twin brother’s efforts to make her spirit join his in death. Since she had not done this, she sensed his spirit at night in her bedroom urging her to join him. How could I as her pastor respond to this, except to grieve with those who mourned for her after she died in the hospital, celebrate a prayerful funeral liturgy and do whatever I could to be of assistance to her children and husband?

For most of our Liberian parishioners, there are two ways of proceeding regarding health and illness. The first is decidedly “modern”; one seeks the best available treatment one can afford from the many clinics, pharmacies and health care professionals. The second level is “traditional”; it does not subscribe fully to the “germ theory” of illness. One group of traditionalists uses herbs and other natural remedies. Another insists that illness is caused by a spirit invoked by an enemy. The solution is to seek someone in touch with an even more powerful spirit, who calls forth that spirit to heal the one who is ill.

People say that a particular parishioner has gone to the “sick bush,” which means to the witch doctor who is helping them get well. Liberian pragmatism precludes ruling out one level in favor of the other. Whenever modern medicine does not yield the hoped-for result, one turns to the second level, sometimes referred to as “African science.”

Among the most feared participants in African science are “heartmen”—human vivisectionists who remove vital organs from unfortunate victims for the practice of juju. People are terrified of these “medical” practitioners and fear being associated with them. An effort by the Justice and Peace Committee of our parish at mediation in a rape case was derailed when someone referred to the rapist as a heartman; the meeting ended in acrimony.

Some priests and most of their lay assistants endorse a dual-track approach to medical problems. I know one priest who was involved in a serious and long-lasting conflict with a parishioner. Suddenly large abrasions appeared on his skin over his kidneys. They reminded him of tribal facial marks and caused him discomfort. Even more troubling was the way his genitals became enlarged. Upon hearing of the problem, his lay assistant introduced him to a practitioner of “reverse juju,” who could cause physical harm to the perpetrator. Unwilling to retaliate in this way, the priest declined the offer and sought medical attention. None of the nurses or doctors he consulted attributed his problem to African science. After a thorough physical examination and various tests, his physician spoke of an unidentifiable pathogen that was causing his trouble and prescribed a strong antibiotic, which eventually cleared up the condition.

Holy Family Parish may not be entirely typical of West Africa or even of Liberia. During the 14-year civil war that ended in 2003, the parish was occupied at different times by three rebel militias, which fought pitched battles with one another, with the armed forces of Liberia and with the West African peacekeepers known by the acronym Ecomog. Many parishioners became “internally displaced persons” or left Liberia as refugees. Others who stayed suffered various forms of trauma. Catholic pastoral care for them at the time was hit or miss, because for 11 years priests came only on Sundays, if they came at all. Out of ignorance or necessity, traditional beliefs and practices competed with Catholic ones.

Perhaps these topics will be discussed at the Synod for Africa in October 2009. One paragraph (No. 32) in the preparatory document for the synod states that “some false beliefs and practices from African cultures demand special attention” and mentions witchcraft and ancestral rites of widowhood as special concerns. The idea of Bernanos’s curé, that one parish is like all others, still informs some official teaching in the church. This leaves country priests in Africa wondering what they should do with their people. It is my hope that frank discussion of African traditional beliefs will take place, perhaps behind closed doors, at the coming synod.

Show Comments (
1
)
Comments are automatically closed two weeks after an article's initial publication. See our comments policy for more.
PETER OKUMA REV FR
11 years 3 months ago
The experiential and erudite article of Father Perry, SJ suggests to my knowledge as an African scholar, the work that needs to be done in ennobling the faith among our people. It does not call for so to say for 'mystifying' and 'demonising' African culture and tradition in toto but for an 'openness' - like a scientist trying to unravel nature without fore-prejudice. But the contrast seems to has been the case till now especially from the point of view of some past missionaries to Africa. In contrast, a better understanding of the 'African' and his cultural milieu as such not 'oberflaechlich'(periperally) as the German will say, but deeply will be a way forward to a true 'Inculturation'.
In sum, a typical Christ-like approach and understanding will help to win the continent for-itself-for-Christ! That mission to my mind is already, and rightly on course - and needs to be encouraged in the forthcoming Synod of bishops, 2009.

This article also appeared in print, under the headline “Demystifying Medicine,” in the August 17, 2009, issue.

John Perry, S.J., an associate professor of religious studies at the University of Manitoba, Canada, is currently on study leave at Holy Family Parish in Monrovia, Liberia. The Diary of a Country Priest