The Limits of Positive Thinking 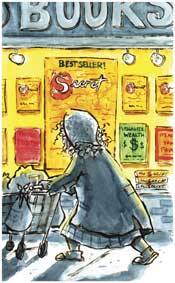 Shortly after graduating from the University of Notre Dame in 2006 with a degree in the program of liberal studies, I took a job doing adult education—teaching reading, writing, math and computers skills—at a homeless shelter, where the power of positive thinking was the staff drug of choice.

I knew social workers who stared at $100 bills before going to bed, hoping to attract “abundance” into their lives, rather than going into a more lucrative profession. And I once listened as our staff wellness expert handily dismissed the problem of evil in front of a class of homeless students using the same logic—that is, positive psychology’s “law of attraction.” This is the belief that positive energy attracts positive energy and negative energy attracts negative energy. So whatever happens to you, good or bad, you have attracted it by your thoughts. In short, if you are rich or famous, keep doing whatever it is you are doing. If you are poor, sick or suffering, you and only you are to blame. Think healthy prosperous thoughts...or else.

Popularized by self-help literature, these ideas that whatever we desire we will have, that it is all in our heads, that we alone control our destinies and that “thoughts become things” have been around in various forms for a long time. But they have recently re-emerged on a large scale with the enormous success of Rhonda Byrne’s book and movie by the same name, The Secret. The secret, of course, is the law of attraction. Oprah Winfrey swears by it; she has featured it multiple times on her television show and in her magazine, and millions of ordinary Americans are buying in. I have even seen The Secret advertised on the outside notice boards of South Bend area churches: “Unity Church of Peace knows The Secret, do you?”

So as the wellness expert and devotee of The Secret explained to my homeless students how they could vanquish their suffering and end their poverty with the power of positive energy, I wondered, a little shocked, what kind of energy the people of Iraq had been sending out into the ether, thus “attracting” such unrest. I did not allow myself to think about the woman in the front row, who, I knew from a writing assignment, had been raped for the first time at the age of 5. Certainly as a little child she had not attracted this violence. Its occurrence was something I could neither fathom nor wave away.

Of course, certain aspects of the positive-thinking curriculum seemed unremarkable: for instance, making “vision boards” with my homeless students (poster-board collages full of images symbolizing their hopes and dreams). This seemed fun and benign. After all, there is something to be said for visualizing one’s own success. Still, giving students the necessary skills to go after the three-story house on the white board and suggesting that thinking about that house and getting it are magically interconnected by the power of positive thought are two very different things.

This troubling idea, that affliction is doled out as punishment for one’s negative thoughts and that prosperity is a result of thinking positively, prompted me to reflect on my own understanding of suffering, informed at least in part by the writings of Blessed Julian of Norwich.

In Revelations of Divine Love, Julian offers no causal explanation for suffering. While she acknowledges human sinfulness, she also recognizes an unjust and fallen world in which all people suffer. In Julian’s vision of the parable of the lord and the servant, a lord sends his servant on a journey. While traveling, the servant stumbles and falls in a dell. Trapped in the dell, injured and alone, the servant suffers greatly. Instead of being angry at the servant’s clumsiness or sin, the lord mysteriously loves the servant more than ever. In this radical accounting, suffering is not simply negative, at least not in its entirety. Rather, it is sometimes the means through which humanity is drawn impossibly closer to God’s self.

During my year at the homeless shelter, I was confronted daily with the realities of homelessness, rape, addiction, violence and mental illness. In that space, Julian’s approach seemed not only more compassionate, but perhaps more helpful as well. Yes, our attitudes can and do positively improve our lives, but they do not explain suffering or success. All people suffer. We are not our own creations, tidy products of ideology. We are human beings, hopelessly interdependent, ugly and beautiful, both.

It is not that difficult, I told her, looking down at her purple-stained lips and messy side ponytail. Pay attention, I said. She told me that it was hard for her to remember things ever since she was hit by a car while walking along the side of the highway collecting cans. Her body was thrown into a ditch, she told me. “I’ve had several brain surgeries,” she added.

No, I cannot comprehend the suffering of these students. I can only trust that someone might be willing to venture into the dell with them, if only for a moment, neither of them helpless but both of them hoping in a God whose will is our peace.

13 years 7 months ago
Awesome piece, Anna!
Paul Huber
6 years 2 months ago
Positive attitude and positive thinking will bring several kinds of positive changes in our personality and life. Therefore, we should avoid negative atmosphere and people. But it is really tough to build a positive attitude in our personality, as it requires a high level of dedication, motivation, inspiration, and confidence. So that, we can easily develop positive thoughts in our behavior. In this article also, we have found certain important points through which, we should learn something better. Thanks for such a wonderful article.