Stonewalled: A humanitarian trip runs aground in Gaza

Stonewalled: A humanitarian trip runs aground in Gaza 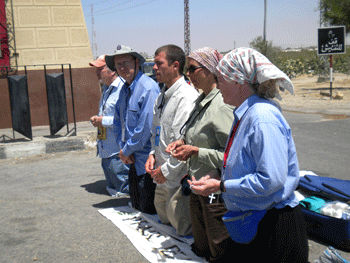 Six weeks ago my colleagues and I from the Catholic Worker attempted to cross into Gaza, but we were not allowed through. We carried with us six large suitcases containing $18,000 worth of medical supplies destined for Al Shifa Hospital, as well as letters, drawings and toys sent by American children for the orphans at the Rachel Corrie Center in Rafah. Friends on the other side of the wall waited in vain for three days for us to arrive.

The border to Gaza, an area of 140 square miles, is sealed by a formidable Israeli wall on land, an Israeli naval blockade by sea and the Israeli air force overhead. The vast majority of Gaza's inhabitants are unable to leave or enter Gaza via the only openings, the Erez crossing to Israel or the Rafah crossing to Egypt. In addition, authorities at both crossings have placed restrictions on food, medicine and other supplies entering Gaza.

On December 27th, the Israeli military launched a 22-day assault against the people of Gaza, which resulted in the deaths of 1,314 Palestinians. Over 5000 were wounded, 100,000 displaced and 15,000 homes damaged or destroyed. Public infrastructure and utilities were severely damaged. After two days spent at the border, receiving conflicting messages about the entrance process, it became clear that authorities did not want us to see the extent of the damage inflicted on Gaza by Israel. In an attempt to open the border, we used our most powerful method of persuasion: prayer. We knelt hourly in front of the closed border and prayed aloud the sorrowful mysteries of the Rosary for the 1.5 million people living in Gaza.

Though our prayer did not immediately open the border, it had an effect. An Egyptian guard told us that he was so moved by our witness, he began to pray with us. Our team managed to get the medical supplies into the hands of friends who ultimately got them through. And, on the weekend of May 16-17, the Rafah border was opened for several hundred Palestinians. We do not discount our prayers in these small victories.

Later, our team traveled to Sderot, the Israeli city most affected by rocket fire from Hamas—up to 30 rockets a day. We visited the family of Or Adam, husband and father of three, whose home was hit by a rocket in February 2008, nearly killing his 14 year-old daughter. His youngest, Bar, had to see a psychologist for a year because of the event’s traumatic impact. Nonetheless, Adam told us, upon hearing a nearby explosion from an Israeli bomb on Gaza, Bar thoughtfully questioned, “Why would we want to do that to them? That will only make them want to send more rockets here.”

Nomika Zion, founder of a kibbutz in Sderot and co-founder of “Another Voice,” a group of residents from the surrounding area who call for alternative approaches to the Gaza conflict, described to us the fear and stress she experiences on a daily basis. During last year’s six-month ceasefire, Zion said, she finally had felt safe; it was the first time her government had tried to protect her.

Zion and other members of “Another Voice” speak to Gazans on the phone every week. Despite her own difficult situation, Zion said, “I can’t even begin to compare our suffering to that of the Gazans…the people of Israel don’t understand what it means to be living in the biggest ghetto in the world.” Amidst the recent assault, Zion wrote an article in which she chastised her government: “The bloodbath in Gaza is not in my name nor for my security.” She received many positive responses to the article, which she said made her realize, “I was not the only voice.”

Upon leaving for my trip, a friend wrote, “May the barriers to your entry fall like the walls of Jericho—by the power God's mighty hand and the love of Jesus.” Our group didn’t bring the wall tumbling down, but we have faith that our action was a link in a chain of actions that will chip away at the foundation of injustice that upholds it.

Show Comments (
4
)
Comments are automatically closed two weeks after an article's initial publication. See our comments policy for more.
Keyran Moran
11 years 4 months ago
Yes, Gaza is the biggest ghetto in the world and indeed Israel is the biggest sanatorium in the world. Gaza's misery exists because of Holy Silence plus Israel's Orwellian Propaganda. Propaganda and Silence go together; one can not exist without the other. USA used to be a republic of checks and balances. Without the Lobby, the servile congress and the Vichy churches, Israel would be as small and modest as Estonia. Your piece, a bit late, but well written, does something to help President Obama and the Brit Shalom's Righteous Jews find an answer for those hungering and thirsting for Justice.
Mary Wood
11 years 4 months ago
Brenna, God love you. I'm so glad you tried. In this country (England) I've heard of two women who separately got stuff into Gaza. One was a feisty Baptist minister who was due to go on a post-Christmas holiday ragpicking in Cairo. When she heard of the Israeli assault on Gaza and the serious burns resulting from the artillery used she begged 5 - or was it 7 - big suitcases of specialist burns dressings which she took to Cairo. The clerics in her hotel applauded until they were invited to help her cart these medical gifts to Gaza. Somehow they discovered things they had to do! But she managed to drive to the Border, was NOT allowed in, great long queues of lorries waiting, and Gaza medics pleading and pestering on the other side. Finally officials said she could have 10 -yes ten- minutes to pass something through a very small aperture in the barrier. So she set about doing what she could, and suddenly all the lorry drivers swooped on her stuff and scrambled along with her to get it through in the measly 10 mins allowed. And these precious, desperately needed burns dressings were passed through. Of course it was a drop in the ocean, but she did it. The clerics enjoyed their day, until they heard what this brave woman had achieved without their help or encouragement. The other woman was a layperson who went with the VIVA PALESTINA convoy that drove from UK in Feb and got through - leaving their trucks in Gaza. Even the trash-worthy truck were left to be available for cannibalising. That wasn't an easy drive with so many men, some of whom pretended not to see a truck manned by 2 women! God love you and your companions. I'm about to visit Jerusalem and environs!!! :) next week. A prayer please. Thanks Mary
11 years 4 months ago
It is a terrible tragedy how Hamas and the Palestinian Authority brutalize the people they purport to represent; using them as human shields, launching rockets from their homes, refusing to make even the slightest pause in their murderous campaign to exterminate the Jews so their own families can have desperately-needed burn dressings. Let us pray for the Palestinian people, the North Korean people, the Burmese people and all who are victimized and terrorized by those who claim to lead them.
11 years 4 months ago
It is eminently clear that the Israeli government does not possess the political will for a two state solution. This, in itself, is tragic, but to wage this kind of hell upon defenseless civilians is an anathema and deserves redress.

This article also appeared in print, under the headline “Stonewalled,” in the June 8, 2009, issue.

Brenna Cussen is a member of the Catholic Worker movement, which provides hospitality to the homeless and works for peace. She lives in Worcester, MA.