Christ in the Garden: An Easter reflection on Fontana's 'Noli Me Tangere' 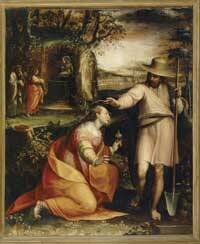 My neighborhood, Boston‘s South End, is notable not only for its many intact blocks of stately Victorian townhouses but also its numerous community gardens. Within a small radius of my house are several of these large swaths of public land, punctuating the red-brick urban landscape, each divided into small plots, entrusted by the city to the custody of individual citizens, to plant them as they see fit. In the growing season, I find it fascinating to watch people lovingly caring for their little piece of Mother Earth, expressing their own distinct personality and aesthetic tastes through an endless variety of flowers, vegetables, shrubs and vines.

Now that we are on the verge of the bursting forth of another spring, this inescapable feature of my daily life, combined with a recent encounter with a remarkable painting of the Italian Renaissance, has had me wondering about an odd question: “If Jesus were a gardener, what kind of garden would he plant? What would his garden look like?” Before I say anything about my response to this pious query, a word about the painting that planted the question, as it were, inside my head.

It is Lavinia Fontana’s “Noli Me Tangere,” depicting the surprise encounter between Jesus and Mary on Easter Sunday morning described in the Gospel of John (20: 14-17). Painted in 1581, this canvas is by no means either the most famous or the most beautiful rendition of this scene. But it is worthy of note for at least two reasons. First, it comes from the hand of the first woman in European history ever to achieve the same public fame and professional status as her male counterparts in the very mainstream and at the highest levels of art patronage, both secular and ecclesiastical. Though married, the mother of 11 children and working against impossible odds in yet another male-dominated field, Lavinia Fontana was both economically and critically successful in her career. Garnering prestigious commissions from princes and prelates, she had the distinct honor in 1603 of being called to Rome by Pope Clement VIII to serve as official painter to the papal court, where she died in 1614.

Though rather modest in size (80 cm. x 65.5 cm.), the present Noli me tangere is nonetheless considered one of Lavinia’s most successful canvases for the technical skill evident in its composition and coloring, as well as for its unusual “take” on one of the most popular scenes in Christian art. The latter, in fact, is the second reason for which the canvas is worthy of special attention. Whereas traditionally, in perfunctory deference to the scriptural text (“Mary, thinking he was the gardener...”), most artists had shown the resurrected Savior casually holding some garden implement, Lavinia, instead, gives us a Jesus—rather homely—completely decked out in horticultural apparel: coarse, belted smock, wide-brimmed straw hat, with a large shovel capable of digging real holes. It was no act of simplistic literal-mindedness on her part; Lavinia deliberately wishes to impress on us the fact of “Jesus as gardener,” as if to remind us that the specific nature of Mary’s misidentification had some spiritual truth to convey.

In so doing, the artist was in fact giving visual representation to a traditional theme of orthodox scriptural exegesis and popular preaching, one tracing its origins to patristic times. Mary’s misidentification was meant to remind us, so the pre-modern exegetes taught, of a spiritual reality: Jesus is the gardener of the human soul, eradicating evil, noxious vegetation and planting, as St. Gregory the Great says, “the flourishing seeds of virtue.” Although today out of circulation, this teaching was disseminated in Lavinia’s age in such popular, authoritative texts as Ludolph of Saxony’s Life of Christ (a book that played a crucial role in St. Ignatius Loyola’s conversion) and Jesuit Cornelius a Lapide’s Great Commentary on Scripture. Lavinia had clearly done her homework.

But to return to today and my unanswered question about Jesus’ garden provoked by Lavinia’s canvas and the sight of so many gardens in my daily life: What would it look like? Would it be a dense riot of color, texture and fragrance? Or would it be more Zen-like, a quiet, stirringly spare arrangement of a very few but eloquent plants? But, surely there must be some lilies in the mix—it is, after all, the flower most associated with Easter, and did not Jesus admonish us to “consider the lilies of the field”? The question is, of course, an impossible one to answer, and such reverie can be no more than a kind of amusing parlor game. However, even as I acknowledge the frivolity of the question and the impossibility of an answer, my mind, for some reason, continues to take delight and what St. Ignatius would call “consolation” in imagining Jesus, with his straw hat, smock and shovel, digging and planting and weeding.

Of the many metaphors by which we traditionally imagine Jesus and the working of his influence in our world, I now find this ancient but long-forgotten one strangely compelling: Jesus the gardener at work in the often rough, hostile and forbidding terrain of the human heart, transforming empty deserts into fertile patches of a renewed Eden, producing the most unexpected, life-giving fruit, which in turn sends its seeds off in every direction the wind spontaneously takes them.

Franco Mormando is associate professor of Italian at Boston College.

Show Comments (
1
)
Comments are automatically closed two weeks after an article's initial publication. See our comments policy for more.
Edison Woods
13 years 7 months ago
This is a very interesting article especially when one remembers Holy Scripture. Throughout the New Testament one encounters horticultural or garden imagery. Evidently our Lord considered the garden and its fruits the simplist way to present His message. And considering the stubbornness not to say stupidity of those people with whom he had to deal then, to say nothing of now, His choice is understandable. The garden imagery gives hope but also a warning remember the withered figtree.