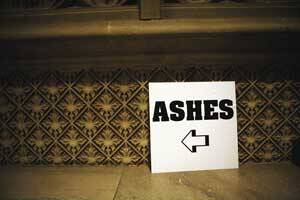 The Gospel reading for Ash Wednesday, taken from the Gospel of Matthew (6:1-6, 16-18), includes these lines: “When you fast, see to it that you groom your hair and wash your face. In that way no one can see you are fasting but your Father, who is hidden....”

What do Catholics do every year in response? They approach the altar to have their foreheads dirtied with a black smudge, more or less guaranteeing that everyone “can see.” Non-Catholic observers may find this paradoxical. But this is only one of several paradoxes surrounding the day that marks the beginning of Lent, which this year falls on Feb. 25.

The celebration (Dies Cinerum, “Day of Ashes”) appears in the earliest existing copies of the Gregorian Sacramentary, dating from the eighth century. But the Christian practice of applying ashes is much older; fourth-century penitents donned sackcloth and were publicly dusted with ashes to show their repentance, as sanctioned by the Old Testament.

Traditionally, the ashes distributed are made by burning the leftover palms from Palm Sunday of the previous year. The remains are then pulverized to make the dense, slightly oily powder that even the most lapsed of Catholics readily associate with Lent.

Paradoxically, many disparage rather than celebrate some Catholics who attend Mass or receive ashes on the day. “CAPE Catholics” is a term for those who appear in churches only on Christmas, Ash Wednesday, Palm Sunday and Easter. “A&P Catholics” attend on Ash Wednesday and Palm Sunday. Both terms are humorous but faintly derisive.

The long lines outside churches show that sacramentals speak to many people in ways that it would be foolish to ignore. Rather than looking askance at CAPE Catholics, one might ask: What calls so clearly to those whose regular practice of the faith has waned? Is it the earthy symbolism of ashes? Is it the public identification with the church? More simply, is the desire for conversion something to be reverenced, not mocked, and something upon which parishes can build creatively?

Ash Wednesday, then, is a day with a surprising Gospel reading and a controverted reputation. It highlights the paradoxes not only of our faith (we die to live; in weakness we are strong) but also of the season that we are about to enter.

Lent is a time of penance, but not just penance. The Second Vatican Council’s “Constitution on the Sacred Liturgy” spoke of the twofold character of this liturgical season: it “recalls baptism or prepares for it,” and it “stresses a penitential spirit.” Catechumens, preparing for baptism, joyfully anticipate the Easter Triduum, as do the rest of us. Paradoxically, this sorrowful season is also about desire and hope.

Another paradox is that the approach to this season of traditions has recently moved in some refreshingly untraditional directions. Whereas in the past many Catholics were encouraged to “give something up,” more common today are invitations to “do something positive.” And while many past exhortations focused on individual sin, Vatican II underlined the idea of “social sin.” Where, for example, do you participate in structures that perpetuate sinful practices? Perhaps instead of giving up chocolate, you could help your company pay a fairer wage.

A final paradox of Lent: Christ is risen. As with Advent, when it can seem odd to pretend that baby Jesus has not yet arrived (Keep him out of that crèche!), it may be disconcerting to hear homilies that make it seem as though Jesus has not yet been crucified, died and risen from the dead.

Nonetheless, it is important to enter into his story once again. While Jesus Christ has undergone his passion, death and resurrection, his story takes place in our lives every day. We are called to take up our crosses, to die to ourselves, to search for signs of the resurrection in our lives and, paradoxically, to remember the story that we are still living.

James Martin, S.J., is culture editor of America and editor of Awake My Soul

@jamesmartinsj
Show Comments (
4
)
Comments are automatically closed two weeks after an article's initial publication. See our comments policy for more.
13 years 11 months ago
Have seen the CAPE & A&P, Catholic's, and there are plenty of SUBMARINE Catholic's too. All Christian people as well as Non-Christians in need of Christ, need to remember the story that we are still living with Christ in our lives 24/7.
13 years 11 months ago
An examination of contemporary "global society" exhibits the abandonment of the old "folk culture" and its rituals for more modern expressions. The traditional story teller has been replaced by the blogger. Old rituals replaced new ones or abandoned completely. Yet, as an anthropologist, I find those who seek a simpler, more authentic approach to life find it through a meaningful internal dialog or modeling and their environment. The passion of Christ continues to provide a prototypical model for personal regeneration in a very incredulous world.
13 years 11 months ago
Fr. Jim, You have no idea how much (I believe) the Holy Spirit is using your various writings to create change in me right now! In your last sentence you have singularly put words on the entire transformative process I desire to live everyday (even if decidedly not well at times). I stammer on in fits and starts to explain this "experience" to my friends, who quietly wonder what's come over me. I will be quoting you for sure...Thank you for such clarity and your welcoming inclusion of us neophytes!
James Sullivan
6 years 11 months ago
I'm happy when people show up to church any time. Who am I to judge? Welcome. Welcome. Welcome.