Shelter, Food and the Stimulus 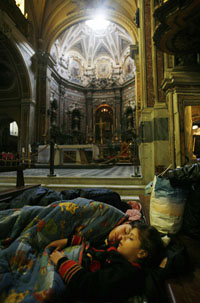 The new administration’s projected $825 billion stimulus package should create jobs not only in traditional ways, like infrastructure improvements on roads, bridges and school construction. It should also focus on offsetting the sharp rise in hunger and homelessness among the nation’s rapidly growing number of poor people.

Already, low-income advocates predict that people in deep poverty, that is, those with incomes of less than half the poverty line of $21,200 for a family of four, will increase by between five and six million if unemployment reaches 9 percent. Barbara Sard, a policy analyst at the nonprofit Center on Budget and Policy Priorities, has said that such an increase would put as many as a million families at risk of housing instability and homelessness. Even those not yet in deep poverty could face homelessness because of home foreclosures that have already pushed many into the rental market, which, because of competition for affordable rental housing, has experienced an increased demand that in turn has caused rents to rise.

And yet, precisely at a time when help is most needed because of the escalating rate of unemployment, homeless prevention programs in some areas are being cut back because of state and local budget shortfalls. Congress should take steps to assist states facing this dilemma to withstand the economic pressures that push more people toward homelessness. In practical terms, housing advocates urge that recovery funds provide new non-renewable housing vouchers that would enable 200,000 families to have access to adequate housing through 2010. Along with vouchers, Congress should also provide an additional $1.5 to $2 billion for the U.S. Department of Housing and Urban Development’s emergency shelter grant program, to prevent an additional several hundred thousand families from becoming homeless. The cost would be only one half of 1 percent of the overall recovery package, and yet such measures would not only lessen the increase in homelessness, but would also provide a short-term stimulus to the economy by injecting funds into local economies.

A similar situation prevails regarding hunger. With the steep rise in unemployment and food prices, participation in the food stamp program is nearing record highs. Between August 2007 and August 2008, caseloads nationwide increased by almost three million persons. But a month’s worth of stamps typically covers only thee weeks of the average family’s food bill. Consequently, as another component of the recovery package, anti-hunger advocates rightly urge Congress to boost the current food stamp benefits both to make stamps last through the month and to stimulate the economy. Every additional dollar in food stamps results in $1.73 in increased economic activity.

Since job loss is so central a part of the overall economic picture, assistance should aim to extend and expand unemployment benefits. Fewer than 40 percent of unemployed workers currently receive unemployment benefits. This is partly because many states follow policies unchanged for decades. As a result, numerous low-wage and part-time workers are ineligible for unemployment benefits when they are laid off. A federally funded increase in benefits, as well as an extension beyond the usual 26 weeks, would help ease the fallout from job losses.

The stimulus package should also include fiscal aid to states facing budget cuts that are weakening Medicaid benefits. As of last December, 19 states had lowered payments to nursing homes and hospitals, and had eliminated certain treatments, like physical therapy, entirely. Cuts of this kind represent a major tear in the health care safety net created by Medicaid in 1965. The federal government should do more to prevent cuts of this kind that affect the most vulnerable populations.

President Obama has spoken of the need to reach out to these populations. That might well begin in the nation’s capital, the seat of Congress, which is also a textbook case of the stark gap between rich and poor. Before his inauguration, Obama said on ABC’s “This Week” program that “one of the things I don’t like historically about Washington is the way you’ve got one part of Washington...pretty prosperous. Then, you’ve got another half...that is going through enormous challenges,” namely the challenges of poverty. “I want to see,” he continued, “if we can bring those two Washington, D.C.’s together.” Congress has the power to do that not only in the capital but throughout the nation with a stimulus package that would create both jobs and the protections that poor people need as shields against hunger, homelessness and lack of health care. We hope the president and Congress, acting in a bipartisan spirit, take the needed steps to meet these and related goals.

The Editors
Show Comments (
2
)
Comments are automatically closed two weeks after an article's initial publication. See our comments policy for more.
Mike Evans
12 years 3 months ago
These issues are not only a national budget priority but even more reflected in the serious cuts being made at the state and local levels. Why is it that budget reductions in aid for those in poverty seem easier to make than cuts to other more 'favored' programs that affect the prosperous? Which group has a greater claim on our resources?
David Healy
12 years 3 months ago
I am a dual US-Australian national who has spent much time living and working in both countries. In 2001, the firm I was working for in New York restructured, firing me and the entire department I worked in. I applied for, and received, unemployment benefits. The benefits, when converted to Australian dollars, came to more than I had been making in my previous managerial job in Australia. New York bases the amount it pays in unemployment benefits on what a person was making before becoming unemployed. Australia bases unemployment benefits on need. I'd suggest the Australian approach makes more sense.