The Only Road to Freedom

The Only Road to Freedom 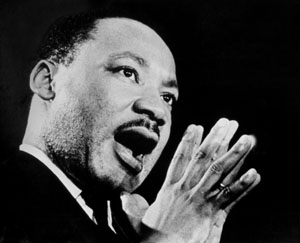 The pantheon of history is filled with many types of leaders. The greatest envision what humanity could be at its best, and among them a special luster attaches to the few who guide others along the difficult and sparsely traveled path of nonviolence. Last month the nation entrusted itself to its first black president; and this month, Black History Month, we ought to honor the historic leadership of those African-Americans who, led by the Rev. Martin Luther King Jr., waged the most effective nonviolent movement in our nation’s history.

The civil rights movement during the 1950s and 1960s resulted in court victories and new laws that reversed more than 100 years of racial segregation. These began to put an end to inferior education, housing and public accommodations for African-Americans. The movement also succeeded in overcoming obstacles to voting and, more successfully than its leaders could have dreamt, to holding public office. Active nonviolence enabled the nation to achieve a massive social revolution with the loss of few lives. By appealing to the consciences of presidents and ordinary citizens alike, the leaders convinced them of the rightness of their cause.

Nonviolence was not the only option open in those decades to American blacks, long terrorized by intimidation, beatings and lynchings. Some followed the radical message of Malcolm X, and others the violent tactics of the Black Power movement led by Stokely Carmichael. Most, however, with the black clergy in the lead, chose the route of nonviolent protest. King offered them a program, rich in Scripture, that blended the writings of Reinhold Niebuhr on power politics and Mahatma Gandhi on nonviolence to effect an alternative force for change. Nonviolent action, King said, requires inner strength and a willingness to suffer violence if necessary in the furtherance of legitimate goals.

Over the years King himself was stabbed and assaulted; his house and those of other civil rights leaders were bombed. Unarmed blacks, including women and children, marched peaceably for the basic rights that others took for granted, and they were met with snarling dogs, water hoses, arrest and imprisonment. Volunteers disappeared only to be discovered later, murdered. A dynamite explosion killed children at Sunday school. But Dr. King’s nonviolent protesters continued to trust in the redemptive power of unmerited suffering.

Not only King’s methods but also his stated goals stand in vivid contrast to those for which many people today fight and die. He sought to convince persons in power that his immediate objective, whether equal seating on a bus, school integration or the right to vote, would benefit them all, the persecutor as well as the victim. And though he worked to gain for all the equal rights promised in the U.S. Constitution, his vision extended to the whole family of humankind. In preaching to the congregation at Holt Street Baptist Church, King said, “The end is reconciliation; the end is redemption; the end is the creation of the beloved community.” He believed that agape love could inspire new social relationships and transform opponents into friends. King identified no enemies, no persons he wished to humiliate, dominate or subjugate once the movement achieved its goals, and he admonished his followers not to gloat over the victories they won. He himself neither courted violence nor designated others for martyrdom, but violence claimed his life at age 39.

Nonviolent action has been practiced in Myanmar, in South Africa, in Tiananmen Square, in Latin America, in the Philippines and in the countries of the former Soviet Union with varying degrees of success. An appeal to conscience works best, however, in confronting a nation of laws, as in Britain, the United States and South Africa. Organized nonviolence also requires a society open enough for the world to see what is taking place; it also must be coupled with other initiatives for change—laws, political parties, international public attention and institutions that promote peace and conflict resolution.

One of the Catholic contributions to peace is the church’s insistence on the natural role institutions play in social life. In 1993 the U.S. bishops urged that “as a nation we promote research, education, and training in nonviolent means to resist evil.” After nearly a decade of war, with no end in sight, the time has come to invest in education for and utilization of nonviolence at a national level with a U. S. Academy of Peace. As King wrote in 1966: “Violence, even in self-defense, creates more problems than it solves. Only a refusal to hate or kill can put an end to the chain of violence in the world and lead us toward a community where men can live together without fear.” If nonviolence is, as King often said, “the only road to freedom,” we must not allow it to become the road not taken.

Show Comments (
1
)
Comments are automatically closed two weeks after an article's initial publication. See our comments policy for more.
12 years ago
The right to self defence is the stumbling block that makes a nonviolent response to violence the road to freedom unconditional. Unconditional nonvolent response to any aggression whether it be through the police or military is required.

This article also appeared in print, under the headline “The Only Road to Freedom,” in the February 2, 2009, issue.