The Roots of Terrorism 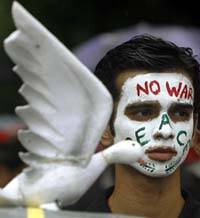 Among the array of challenges facing Barack Obama in his first year in office will be the ongoing struggle against terrorism, both at home and abroad. As the vicious terrorist attacks in Mumbai in November and the recent Hamas rocket attacks against Israel made clear, no nation involved in international politics and commerce is free from the threat of political violence. The past few years have shown that civilization rests on a much more precarious footing than we might have believed even a decade ago.

But who is the real enemy in the global fight against terrorism? Even to call this conflict a “war on terror” is misleading, given that our enemies are of such disparate origins and intentions. Sweeping generalizations—that our enemy is the Islamofascist, the Muslim fanatic, the anarchist, the ignorant youth—are often harmful in the formation of any effective response to terrorism.

A sincere yet harmful truism is that our real enemy is ignorance, that if our opponents could be freed of propaganda and false conceptions, their rage against Euro-American civilization would abate. But any truthful analysis of terrorist motives requires the concession that the real root cause of their actions is resentment. Often enough, education actually leads not to greater appreciation for Western culture, but to even deeper antipathy. The hijackers of Sept. 11, 2001, are a case in point. Many of the attackers had achieved high levels of education as engineers, scientists and academics. Many studied abroad, and several—ringleader Mohammad Atta among them—would fit the definition of upwardly mobile young professionals. Nevertheless, they were seduced by an ideology that convinced them that their death, and the deaths of thousands of innocents, was the appropriate response to their condition.

While scholars like Lawrence Wright, author of The Looming Tower, the best-selling study of Islamic terrorism, have shown the powerful influence of fundamentalist religious beliefs in terrorist recruitment, groups like Al Qaeda gain from the religious and from the resentful, drawing devotees from those who find that the adoption of Western economic and social practices does not always translate into economic opportunity or social progress. Oftentimes the very technological advances that should have led to greater upward mobility—the Internet and global communications among them—have provided terrorist groups with the means to link up previously isolated cells. Access to the media has two ill effects, offering greater awareness of severe economic disparities and an introduction to a global entertainment environment profoundly at odds with the religious and cultural sensibilities of many peoples.

Another alarming portent of future terror is the real possibility of widespread state failure. In its most recent analysis of global trends, the National Intelligence Council suggested that by 2025, as many as 36 nations (with a total population of 1.4 billion) will face shortages of fresh water and sustainable food supplies. A number of these nations, which are overwhelmingly in Africa and the Middle East, are already unable to provide consistent law and order. These same countries are also experiencing a “youth bulge” of young men and women now entering adulthood.

State failure also represents a failure of compassion on the part of the wealthy and stable nations of the world. Imperiled nations support exactly the populations among whom resentment will be strongest if the world community fails them, if instead of jobs and security they find chaos, disease and suffering. In the past, the international community has failed to intervene effectively when neglected situations became humanitarian catastrophes, with Zimbabwe and Somalia as prime examples. As Pope Benedict XVI noted in his visit to the United Nations last year, the “duty to protect” is not just an internal matter for nations, but an international duty.

It is crucial that the United States abandon the rhetoric that casts the international struggle against terrorism exclusively in terms of a crusade against religious fanaticism. The anger that accompanies the ongoing and worsening social ills among the world’s poorest populations also contributes mightily to terror’s allure. Remedying such widespread resentment will not be easy, and cannot be done alone. A reasonable beginning would include greater international cooperation on sustainable development, renegotiation of lopsided trade agreements, a rethinking of the economics of globalization and an end to military and political unilateralism on the part of the United States. All this will, of course, require money—but far less than the world will spend combating the terror and violence that will otherwise flourish amid the ruins.