The Food On Our Tables: The flaws of U.S. agricultural policy 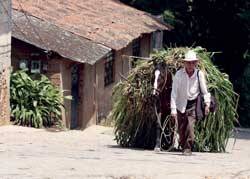 Most of us are happy with the food available in our markets, which to a large extent offer products of United States agriculture. As taxpayers we help to support agriculture through direct payments, or crop subsidies, paid to farmers. Many indirect subsidies, like government-sponsored research, crop insurance and import quotas on crops like sugar, also benefit our farmers. Such subsidies, however, have an unintended social consequence; they allow American farmers to grow an abundant crop and to sell it at prices often below world food prices—an advantage for us, a disadvantage for others.

To see the effect of the policy on a neighboring nation, consider Mexico, where the main crop of family farmers is corn. Mexican farmers have no comparable subsidies, and without them they cannot compete with U.S. farmers whose corn is exported to Mexico. As a result, many Mexican farm laborers cannot find work in their home country. Many of these come to the United States looking for work. Studies show that poverty fuels migration.

Nationwide, direct payments to U.S. farmers in 2008 will total about $5 billion. In 2007, North Carolina farmers received some $66 million in direct subsidies, which placed the state 23rd among the 50 states. Not all farms and farmers receive direct payment subsidies; two-thirds of U.S. farmers do not grow subsidy program crops. And there is an income limit in the 2008 Farm Bill; a person or a legal entity, like a corporate farm, with an adjusted gross income over $750,000 averaged over the previous three years, is not eligible for a direct subsidy.

Every year thousands of farm laborers from Mexico migrate to North Carolina with temporary visas, called H2A visas, approved by the U.S. Department of Labor. Under the H2A program, agricultural employers can hire foreign workers if they can show that they tried to hire local workers first without success, and that the work is seasonal or temporary. North Carolina’s farmers are among the largest users of this temporary agricultural visa. Though H2A visa holders are temporary residents, they are in the United States legally. Studies show that about 48 percent of foreign agricultural workers in the United States hold H2A visas. That means that more than half of our foreign agricultural laborers are here illegally.

Part of what is perceived to be an illegal immigration problem is thus of our own making, as taxpayer-financed agricultural subsidies trigger a migratory flow. This problematic result should generate in us a sense of responsibility toward those we have, perhaps unconsciously, lured over our borders.

Federal and state laws provide protections for migrant farm laborers on issues that include wages, housing, health and safety. Since migrant farm workers are isolated from the greater community and depend on their employers for basic housing, transportation and wages, workers are understandably loath to point a finger at their employers when abuses under the law occur. And many, particularly undocumented farm workers, are unable to take advantage of tax-supported government services like Medicaid and food stamps.

Whether migrant workers are here on H2A visas or are here illegally and undocumented, their labor remains vital to our healthy farm production. Migrants contribute to the availability of the food on our tables.

Many of North Carolina’s migrant labor camps are well organized, clean and safe, while others are not. The North Carolina Department of Labor maps and registers migrant labor camps and conducts pre-occupancy housing inspections before the camps can take in workers. Follow-up inspections are conducted to ensure compliance with the federal government’s Occupational Safety and Health Administration. North Carolina’s labor department employs three full-time compliance inspectors, but there are about 1,600 registered camps throughout the state. The number of unregistered camps is not known, but could be in the thousands. Despite the department’s good efforts to ensure employer compliance with the law, abuses will and do occur.

Along with the efforts of the North Carolina labor department and the state’s Department of Agriculture, the farm-worker unit of Legal Aid of North Carolina conducts an outreach initiative for migrant agricultural workers, partly through the state’s Witness for Justice Program. Legal Aid attorneys administer the program, and an unpaid cadre of law students and members of the Jesuit Volunteer Corps conduct tours of the labor camps. The program solicits citizen volunteers through word of mouth and church bulletins. The initiative provides migrant farm workers with information that explains their rights. The citizen volunteers play an informational role; they enlighten those not professionally involved in the issue about what is learned on visits to the camps. The initiative allows community members with an interest in social justice to develop a better understanding of immigration issues. As a citizen volunteer myself, I was able to get a better look at where our food comes from and what happens to those who harvest it.

Bob Peace is an Alumni Distinguished Professor in the College of Management at North Carolina State University in Raleigh, N.C.

Show Comments (
3
)
Comments are automatically closed two weeks after an article's initial publication. See our comments policy for more.
13 years 7 months ago
Farm subsidies are indeed likely the single largest injustice in the world today, though very few people realize it. The program was started with a good intention–to help small farmers compete–which is still important, but which must be viewed in perspective. While subsidies help the US agricultural industry, they hurt not only other countries, particularly those with largely agriculture-based economies, but also every other sector of the US economy, plus the taxpayers who pay for them. However, removing these subsidies is not simple. Politicians from farm-heavy districts depend on subsidies as pork to keep them in office. Voting against the Farm Bill is suicidal for any rural midwestern politician. More plausibly, subsidies could be curbed gradually, while leaving some support for the smallest farms in the face of huge agribusinesses like Monsanto. The other problem any solution must face is the current underpricing of food. The US public has gotten used to food prices kept artificially low by subsidies. Eliminating subsidies will raise food prices significantly, which will disproportionately effect the poor, who spend a larger portion of their income on food. When corn prices escalated last year due to new corn ethanol plants, prices of milk and other commodities dependent on corn doubled. Any solution to subsidies must account for this as well. While the problem must be fixed, the hurdles to be faced yet are considerable. Eliminating subsidies would significantly aid many of the poorest countries to work their way out of poverty in a sustainable manner, but we must be careful that we do not exacerbate poverty in the US in the process. It should also be noted that the US is not alone in its subsidies; a cow in the EU makes $2/day, more than a lot of the world's population. The $288 billion 2008 Farm Bill is in serious need of restructuring, but it is such a juggernaut of legislation that it is unlikely to change significantly unless the American public becomes more aware of what it contains, and what needs to be changed, and demands it of their politicians.
David Healy
13 years 6 months ago
It's interesting to see that the concept of the "citizen volunteer" is alive and well in North Carolina. Over forty years ago, I spent a summer vacation in the Highland - Dyer area of northern Indiana, doing something similar to what Bob's described. The goal was to encourage parents to send their children to the summer school provided by local church groups and ensuring the kids who did come had adequate clothing and school requisites. As long as migrant laborers form a large part of the US work force (and not just its agricultural component), there will be scope for volunteers willing to ameliorate the living conditions that many (not all) migrant workers endure. It will be a cold day in hell before a political solution that eliminates the need for migrant workers is found.
Robert Koch
13 years 6 months ago
Bob Peace has the right to say what he wants about farm subsidies,and working conditions for farm laborers in the United States. There is justice, and injustice in every faze of business, and in every faze of society, and in every faze of human life. American farmers are a great benefit to the lives agricultural workers, and all in all, treat their laborers fairly. I am a winter wheat farmer in Colorado. Without government subsidies, middle America's grain production would disappear. It is subsidies that enable grain farmers to make a profit. Further, the United States is not the only country in the world that gives subsidies to farmers. Subsidies are commonly paid by many countries. The Mexican government has long failed their people. Mexico is America's second largest supplier of oil, but the many hundreds of millions of dollars paid to Mexico for their petroleum, does not reach Mexico's citizens. The main problem of the Mexican people is not the American farmer, and it certainly is not farm subsidies, the main problem is the Mexican government.