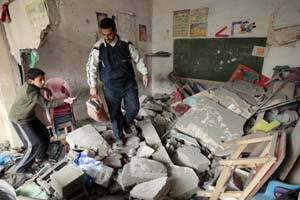 Gaza has been Israel’s tar-pit, a quagmire from which it extracts itself only to be pulled back in. It never seems to learn. In 1993, under the Oslo Accords with the Palestine Liberation Organization, Gaza and Jericho were the first territories handed over to Palestinian control. Following the Al Aqsa intifada in 2000, Israel re-occupied Gaza and then in 2005 withdrew unilaterally. After each of its departures, it obstructed economic development and even emergency relief. Now, once again, the Israeli military is back, following a bruising air assault on the Gaza Strip. The objective of Israel’s latest effort is to end terrorizing rocket attacks on the cities of southern Israel, like Sderot, Ashkelon and Beersheva. To do so, however, requires “breaking the will” of Hamas (the Islamic Resistance Movement). Most experts believe that Hamas will not be broken. As the Washington Post columnist David Ignatius has written, “If there is one lesson in this conflict, it’s that efforts to ‘break the will’ of the other side almost always fail.” Instead, the long-term results will be a revival of support for Hamas among Palestinians and greater hostility to Israel across the Arab world. How will Israel escape the quagmire? How will it break out of the violent illogic of war, repression and resistance?

A fresh beginning requires that Israel acknowledge that in any negotiation it holds most of the cards and therefore must make most of the concessions. Palestinian resistance continues because Israel has repeatedly refused to allow its whip-hand to go slack. In every cycle of peacemaking, it has retained control of commerce, of security, of tax receipts, of water. Resistance—and with it Hamas—will wither only when Israel is ready to make a peace that relinquishes the upper hand over Palestinian life.

The self-styled messianic rebel leader in Uganda, Joseph Kony, head of the brutal Lord’s Resistance Army, continues to wreak death and destruction through a wide swath of territory in central Africa. Having escaped a multinational military offensive that targeted his jungle hideout in the Democratic Republic of Congo, most of his armed followers fled in late December to the D.R.C.’s northeastern corner. There, according to the United Nations, they massacred over 200 people and kidnapped at least 20 children from villages over a three-day period.

The L.R.A.’s two decades of violence have caused the displacement of an estimated two million people in Northern Uganda and the deaths of tens of thousands. The L.R.A. has abducted an estimated 20,000 children, forcing boys to fight as soldiers and girls to serve as sex-slave “wives.” In 2005 the International Criminal Court issued arrest warrants for Kony and his top leaders, charging them with crimes against humanity. On Nov. 29 he was to have signed a peace agreement that had been reached last April in Juba, Sudan. The agreement included disarmament of his army and reintegration of troops into civilian life. The U.N. special envoy, Joaquim Chissano (former president of Mozambique), waited for him at the border between Sudan and the D.R.C., but Kony never appeared. Now, with Kony having eluded the military operation, carried out by combined Uganda, Congo, southern Sudan and U.N. forces, the eventual outcome remains unclear. The L.R.A.’s violence continues as part of one of Africa’s longest-running wars. The combined multinational forces must find and capture Kony, so that he and his followers may be held accountable for the deadly havoc for which they bear primary responsibility.

Lives of Gays and Lesbians

On Dec. 19, the U.N. General Assembly voted on a nonbinding resolution aimed at “decriminalizing” homosexuality. The measure was directed at countries where homosexuals can be executed for sexual relations. As Human Rights Watch notes, “over 85 countries criminalize consensual homosexual conduct.” In some countries, including Afghanistan, Iran, Saudi Arabia, Sudan and Yemen, it is punishable by death.

The Holy See condemned “all forms of violence against homosexual persons” and urged countries to “put an end to all forms of criminal penalties against them.” Nonethe-less, along with 68 other countries, it rejected the resolution, preferring to hold out for a more clearly worded document. The Holy See feared “uncertainty in the law,” which might lead to the marginalization of heterosexual marriages. Cardinal Renato Martino, head of the Pontifical Council for Justice and Peace, also feared that this resolution could limit the freedom of the church to teach that homosexual acts are immoral.

Though the Holy See last year endorsed a similar but more carefully worded document, these distinctions may provide little comfort to those who pray for the church’s support in places where violence against gays and lesbians still occurs. Last year, according to the Federal Bureau of Investigation, hate crimes in this country against gays and lesbians rose by 6 percent, while crimes against almost every other group fell. Stronger public steps are necessary to oppose the execution and murder of gays and lesbians.