Beauty Calls to Us 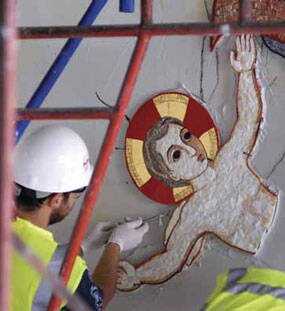 Lourdes, Fatima, Vatican City, Fairfield—the first three of these sites are well known among Catholics; and each boasts the dazzling artistry of Marko Rupnik, S.J. His richly colored mosaics adorn the Basilica of the Holy Rosary in Lourdes, France; the Church of the Most Holy Trinity in Fatima, Portugal; and the pope’s private chapel in the Apostolic Palace. Rupnik’s style is instantly recognizable. His monumental figures are fashioned with vividly colored, oversized tesserae (mosaic tiles); their large eyes, placid faces and mannered poses show the influence of the iconographic traditions of the Eastern churches.

The fourth site, Sacred Heart University, a Catholic school in Fairfield, Conn., is about to unveil the latest of Father Rupnik’s works, a colossal 28-by-44-foot mosaic that will serve as the centerpiece of the school’s new chapel. The 14,000-square-foot chapel is an airy, modern structure designed by Sasaki Associates Architects. Behind the main altar stands the newly completed mosaic, which ties together several events of salvation history in one image. Inside the more intimate setting of the daily chapel, almost every inch of wall space is covered by a Nativity mosaic, literally surrounding the visitor with the story of the birth of Christ.

Anthony M. Cernera, the school’s president, has been intimately involved in every stage of this bold artistic venture. Mr. Cernera first met Father Rupnik during the consistory in Vatican City in 2000. Rupnik, a Slovenian theologian who teaches at both the Pontifical Oriental Institute and the Pontifical Gregorian University in Rome, is also a member of the Centro Aletti, an international community of artists and theologians from the Orthodox, Oriental and Latin churches, based in Rome. “The chapel was on the drawing board when we met,” recalls Cernera, who was impressed by Rupnik’s work in the papal apartments, completed in 1999.

Over the next few years, the two worked together organizing ecumenical seminars for Eastern Orthodox and Roman Catholic participants. In 2005, Father Rupnik told Mr. Cernera that he had a question that he was embarrassed to ask. “Would you consider my being the artist for your new chapel?” said Rupnik. Cernera laughs at the memory. “I was mustering up the courage to ask him!” he said. “It was a providential moment.”

Originally, the school had planned to place a simple cross in front of the reredos, in the space behind the altar. But Cernera and Rupnik saw the possibilities for something else. “We wanted to present the fundamentals of the faith in a way that would engage the students,” said Cernera. The immense mosaic makes reference to the Annunciation, the Resurrection and Pentecost. “We chose the subject in dialogue,” explained Rupnik in an email, “and together we arrived at a complete theme, which expresses in an artistic way our theological starting points.”

On Aug. 17, 2008, a Sunday, Rupnik and 16 artists from the Centro Aletti arrived to begin their work. It was Rupnik’s second commission in the United States (the other is in the Knights of Columbus headquarters, also in Connecticut). Before the craftsmen began the painstaking process of mixing the adhesive solution of Mapei powder and Isolastic liquid, and climbing the five-level scaffolding to affix the individual mosaic pieces to the back wall, Rupnik led the group in prayer.

Rupnik took care not to break with that iconographic tradition, nor with another that specifies which part of the image is to be created first. “It begins with the face of the Lord,” he said, “because Sunday is the day of the Lord.”

The labor continued unabated for two weeks, with artists sometimes working 14-hour days, marking off the designs, coating the wall with plaster and carefully placing the chunky tesserae into their designated places. It was a painstaking process; the face of the donkey in the Nativity scene, for example, contains 20 different colors of mosaic stone.

The resulting mosaics are notable not simply for their beauty but for their size as well. The massive reredos, highlighted by the brilliant gold background, the indigo of the tomb and magenta of the Virgin’s robe, commands attention. The scale, however, is appropriate to the overall dimensions of the church, peopling the large space with holy men and women, much as the artist John Nava filled the Cathedral of Our Lady of the Angels in Los Angeles with his magnificent tapestries of the saints. Like Nava’s work, which offers a distinctive theology of the communion of the saints, Rupnik’s work, the artist hopes, will help viewers meditate on an underlying theology. “The revealed truth is love,” said Rupnik, “and the realized love is Beauty.”

The chapel for daily use, located in the front of the church, is a jewel. Because of its smaller dimensions, worshipers are enveloped by the story of the Nativity, as if they were stepping into a dazzling icon. Mr. Cernera, who holds degrees in theology and education, was enthusiastic about the educational value of both mosaics. “In the Nativity scene,” he said, “you see Jesus on the floor, offering an example of the poverty and kenosis, or emptying, of God. It’s something that we wanted to present to the students.”

As both artist and theologian, Rupnik tries to communicate the fundamentals of the faith visually. “Unlike contemporary art,” he said, “the mosaic does not need to be liked,” he told The Fairfield County Catholic, the diocesan newspaper. “Yet little by little, it affirms the ability to discover the spirit and bring you to a higher level, toward the mystery of God.”

The chapel occupies a central place on the campus. “It’s a statement about the importance of Catholic identity and the centrality of the liturgy, which lies at the heart of our school,” said Mr. Cernera. It will be dedicated sometime in late spring, making Sacred Heart University a new pilgrimage site for admirers of Father Rupnik’s work and for anyone interested in contemporary religious art. “We wanted something beautiful for our students,” said Cernera, “because beauty is one way that God calls us to see what God is doing in our midst.”

View a photo gallery and a video chronicling the installation of the Sacred Heart University mosaic.

James Martin, S.J., is an associate editor of America.

@jamesmartinsj
Show Comments (
4
)
Comments are automatically closed two weeks after an article's initial publication. See our comments policy for more.
JOHN DEAN
13 years 7 months ago
Are examples of Marko Rupnik’s work available for viewing online or in print?
MICHAEL MILLER
13 years 7 months ago
'The revealed truth is love and the realized love is Beauty.' ~ Marko Rupnik, S.J. 'For Gregory of Nyssa, God is to be understood first as ... an unanticipated beauty, longed for, but without certain hope, ...'seen' only by the infinite inflaming of desire, whose savor draws one on into ever greater dimensions of his glory, so that one is always at the beginning of one's pilgrimage toward him, always discovering and entering into greater dimensions of his beauty.' ~ David Bentley Hart
Bill Collier
13 years 7 months ago
Thank you, Fr. Martin, for your article and for the stunning photographs and video. What an incredible artistic gift and charism Fr. Rupnik has! I have occasion to travel through Fairfield now and again on business, and I definitely plan to stop to see and more fully appreciate the mosaics. There's also something very satisfying watching Fr. Rupnik and his team carrying out God's work on scaffolding and in hard hats.
13 years 4 months ago
Fr. Martin - Thank you for the article on Fr. Rupnik! Please write more on the arts in service to the Church! I am also a mosaic artist, based not in Italy but of all places, Houston, Texas. I had the pleasure of visiting with Fr. Rupnik and his team when they were installing the work at Sacred Heart University's Chapel. It was so inspiring to see his work and his team of artists. This team that made the mosaic, like the glass, stone and gold that make up the mosaic, were assembled from many parts of Europe. Most of them have fine arts degrees and around 10 years of experience with Centro Aletti. His is a wonderful take on bridging the world of eastern and western art, in an ancient media yet with a very fresh take. His use of mosaic material in telling a story is unlike any others today or before. While there are stunning fields of abstracted color and meditative layers of rich texture, each composition focuses on the representational images of the our Lord, the Saints, the tenets of our Faith. These images teach, evangelize, doing so in a fresh material and a fresh vocabulary, without any words at all. We are lucky to have his work in the USA. There is also an earlier chapel done by Fr. Rupnik in the Knights of Columbus headquarters building in nearby New Haven, Connecticut as well.