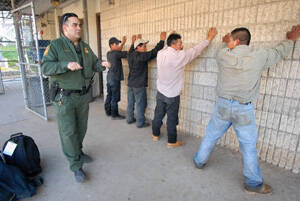 Immigration raids on workplaces and their destructive fallout were the focus of a press conference sponsored by the U.S. Conference of Catholic Bishops on Sept 10. The bishops and other immigrant advocates have felt increasing concern at the rising number of raids since the failure of comprehensive immigration reform in the summer of 2007, a reform that President Bush once favored. The conference also underscored the fact that the bishops have been trying to work with the Department of Homeland Security’s Office of Immigration and Customs Enforcement to curtail the raids because of the humanitarian damage they cause. With immigration reform on hold, I.C.E. officials have come down hard on illegal workers—though not their employers. Last year, I.C.E. made 5,000 workplace arrests of illegal immigrants, 10 times the number in 2005. Among the biggest was a raid in Laurel, Miss., where 595 men and women were rounded up.

Gabino Zavala, auxiliary bishop of Los Angeles, who was not at the bishops’ press conference, said later that the arrested workers at Laurel left behind nearly 300 children under 5 years of age and 187 school-age children, all of whom would now need to be cared for by someone other than their parents. But, he asked, “who, exactly?” He went on to describe the children left fatherless and motherless as “collateral damage in the war for who can be ‘toughest’ on the immigration issue.” Indeed, what happens to children after raids, and especially after the deportation of one or both parents, is among the primary concerns of the bishops and immigrant advocates. At the press briefing, Bishop John C. Webster of Salt Lake City, chairman of the U.S.C.C.B.’s Committee on Migration, said that the raids do nothing to solve the problem of illegal migration and often are carried out “at the cost of family integrity and human dignity.”

Among the more shocking I.C.E. actions was the raid last July on a meatpacking plant in Postville, Iowa. Federal agents took over 400 people into custody. More than 250 were charged with “aggravated identity theft” for using false Social Security numbers or false green cards. Most received five-month prison sentences. A federally certified translator on the scene, Dr. Erik Camayd-Freixas, was dismayed by what he saw during the 10-day, herd-like procedures in Postville. Later the same month, in testimony before the U.S. House Judiciary Subcommittee on Immigration, he said that many of the defendants did not seem to understand the charges and “did not even know what a Social Security number is.” Since a number of those held were ethnic Mayans, “it was unclear to what extent they understood Spanish.” He described the scene at their arraignment as “one of the saddest processions I have ever witnessed.”

Among church leaders who have spoken most forcefully in defense of immigrant rights over the past few years is Cardinal Roger Mahony of Los Angeles. When the House of Representatives was considering an especially punitive measure that would have criminalized people, including church workers, for providing basic assistance to undocumented persons, he said that he would be willing to go to jail, and instruct his priests to do the same, rather than deny humanitarian aid like food, clothing and shelter. This past July, in his keynote address at the National Migration Conference in Washington, D.C., Cardinal Mahony spoke of the “dark moment” in the nation’s history brought about by the failure of immigration reform. It was, he said, all the darker in that it “emboldened some of our elected officials to pursue a punitive approach, using enforcement as both an immigration policy and a political tool.”

Although the pope did not speak specifically of the U.S. immigration debate during his April visit, he did underscore the need to protect immigrant families. Representative Tom Tancredo, Republican of Colorado, a vocal opponent of comprehensive immigration reform, took the occasion to make his mean-spirited remark that it was not in the pope’s “job description to engage in American politics.” At the time of the visit, Cardinal Mahony and other bishops expressed shock that on the same day that the pope and President Bush issued a joint statement underscoring the need for policies that treat immigrants humanely and protect their family life, federal agents were raiding chicken processing plants in five states.

Whoever becomes the next president will need to address the immigration issue in one way or another—we hope in a way that will make earned citizenship possible for the 12 million undocumented men and women now living in the shadows. The current enforcement-only policy is no way to mend our broken immigration system.

The Editors
Show Comments (
9
)
Comments are automatically closed two weeks after an article's initial publication. See our comments policy for more.
14 years 2 months ago
WE HAVE BEEN INVADED!!! SOUTHWEST BORDER APPREHENSIONS (Source DHS/CBP) 1987--1,190,488------1995--1,394,554------2003----905,065 1988--1,008,145------1996--1,649,986------2004--1,139,282 1989----954,243------1997--1,412,953------2005--1,189,108 1990--1,169,939------1998--1,555,776------2006--1,071,972 1991--1,197,875------1999--1,537,000------2007----858,638 1992--1,258,482------2000--1,643,679------2008----660,288 (08/31) 1993--1,327,259------2001--1,235,718 1994--1,094,717------2002----929,809 FACT: In the last 22 years, over 26 million illegals, have been apprehended, crossing our Southwest Border. FACT: Less than 1, out of 4, were estimated to have been apprehended. Mind boggling, isn't it. According to the U.S. Immigration Service 6 million illegals in this country are visa overstays. That is, they got a visa legally in their home country, they came here to visit and then they never left. In the last 22 years, there have been 4 million anchor babies born to illegals. Anchor babies are now being born at a rate of 350-400 thousand per year in our United States. All at our expense!!
David Smith
14 years 2 months ago
The Church needs to speak out forcefully and continually on this issue. One bishops' committee is not enough. Politicians have been showing a deplorable timidity on immigrant abuse and a complacent willingness to ignore it almost completely. Twelve million people are being terrorized and brutalized by the American government and by others acting directly and indirectly under its cover, and they're doing it with impunity because so few people of power and influence have protested.
14 years 2 months ago
Blessed are they who hunger and thirst for justice, for they shall be satisfied. (Mt 5-6-7) Arms You have a gun And I am hungry You have a gun Because I am hungry You have a gun Therefore I am hungry You can have a gun You can have one thousand bullets and even another thousand You can waste them all on my poor body You can kill me one, two, three, two thousand, seven thousand times But in the long run I will always be better armed than you If you have a gun And I Have only hunger Guatemalan poet Manuel Arce
14 years 2 months ago
the government has to think about the children. the affect it will have on them. Also, it will cost more to put children in foster homes or anytime of enviroment.
14 years 2 months ago
To a major level the Church is unconcerned with what happens to the United States. That is obvious since the Church goes out of its way to subvert and ignor our laws by harboring illegal aliens in the country. Our national Pledge of Alligiance states, "One nation under God, with liberty and justice for all." I am ashamed of a Church which through its policies and actions wreeks havoc on the United States and its citizens. Why won't the Church lead and use its influence to discourage illegal immigration? There is no such thing as "earned citizenship" for illegal squatters. There is deportation, however. I don't think the Church truly cares. Otherwise they would influence the flock not to come here illegally. Why would the Church work to destroy the only country who already helps so many anyway, and is the last best hope of a goverment by and for the people? Hasn't the Church enrichened itself handsomely by operating here? If you need social work to do work on stopping the drug flow in Mexico, not materially aiding and abetting illegal alien residents here. Maybe a strong tax for you would convince that your activity is not wise in the illegal alien issue?
MICHAEL MILLER
14 years 2 months ago
The Catholic hierarchy needs to speak out very strongly against our violent immigration system. Often the bishops in their pastorals and diocesan news papers are in fact telling people to vote for a Republican Administration. They need to discuss immigration. We all know that our undocumented immigrants have a better chance of finding justice with the Democrats. If we ever get beyond our fussiness about Communion, perhaps we can actually start to help some people.
14 years 2 months ago
chat with beautiful girl at this site http://www.livechat2go.com
David Smith
14 years 1 month ago
Vince Calhoun asks: "Why won't the Church lead and use its influence to discourage illegal immigration?" Immigration, often and especially in this case, is a natural response to economic desperation. The Church can't prevent this urge from arising or strong people who have not lost hope from acting on it any more than can politicians or steel walls. Immigration has always happened and always will happen, everywhere in the world. Immigration is a phenomenon; "illegal" is a label.
14 years 1 month ago
I considered myself to be an advocate for immigrant rights since I was 9 years old when I had my first experience observing an Immigration raid at a strawberry field in Burlington, WA. The agents asked almost everyone, especially the children, what their name was and where they were born. Most of the children not knowing the threat of what might happen to them or their family would answer honestly. I did the same and proudly gave them my name and that I was born somewhere in Texas. I saw some people run, but were caught by the agents. I asked my Mom what happened and she told me the "migra" was taking those poor people away. At that moment I told myself that it was not right to treat people that way and to leave children fearful and crying because their parent was taken away. Just as much as the need for jobs and survival grows in poor countries, the desperate immigrants will come to the "land of plenty and home of the free". They face dangerous paths, unscrupulous smugglers,and constant fear of being detained by ICE. They will keep coming, if they are hungry. Instead of spending millions of dollars to build the "China wall" along our US/Mexican border why not use it to work with the Mexican government to develop jobs, provide food, and open health centers in Mexico and other underdeveloped countries? Our immigration laws need to be changed to a more humanitarian and equitable system.