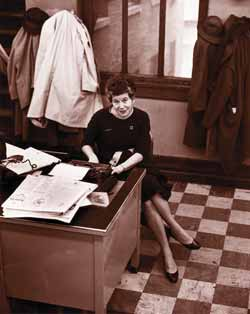 May 21, 1960—It may be possible to overestimate the triumph of Senator Kennedy in West Virginia. No one who was here, however, thinks so. For here the expressions of doubt or resentment over his Catholicism were rendered with a forthrightness that was hair-raising to those who are accustomed to a slight glossing over of statements of prejudice.

It was impossible to be in this State for half a day in this campaign and not be told: “I could never vote for a Catholic,” or “He would have to take orders from the Pope.”

The expressions on the faces of the Kennedy staff during the last week here were a measure of their dismay on being confronted by such a seemingly unscalable wall. True, there was evidence in the last week that a reaction had developed among more fair-minded people, some of whom felt that injustice was being done, and others of whom saw West Virginia’s good name being blackened beyond cleansing.

It was not, however, until Senator Kennedy went on television the Sunday night before the election and assured the people of West Virginia that he would not take instructions from the Pope that hope began to flower in the Kennedy camp. Immediately following that appearance, telephone calls began pouring into their headquarters. Several Protestant ministers pronounced themselves convinced that Senator Kennedy understood and honored the separation of Church and State.

Senator Kennedy’s handling of the thorny religious issue was brilliant. He protested its inclusion in the campaign several weeks ago in a speech before the American Society of Newspaper Editors. He repeatedly told the people of West Virginia that he refused to believe they would reject him on those grounds. Finally, with his frank statement on television Sunday night, on the eve of the voting, he apparently won them over....

The conquest of prejudice, however, means that Senator Kennedy need no longer name his religion as an obstacle to nomination. More than that, as he said at an early morning press conference at his jubilant headquarters in Charleston: “I think that, after the campaign in this State, it will not be necessary to mention it again.” All present would certainly say a fervent “amen” to that.

Feb. 4, 1961—The weather gave the Inaugural weekend a genuine frontier flavor. Pioneer spirit is always needed when snow falls on Washington. When the blanket is 7.7 inches deep and the city is jammed with a million visitors, true hardihood and perseverance are required for survival. For those who struggled through the storm and braved the cold, there were rewards, chief among them which was the sight of the new young Chief Executive relishing every minute of the rites and the revels.

Mr. Kennedy was equal to it all. He stayed at the long and rather pretentious Inaugural Gala arranged by his friend Frank Sinatra until 1:30 in the morning, and made a speech of thanks at that hour. The next day in the bitter cold he stood at the top of the Capitol steps and delivered an Inaugural address that struck sparks with his frozen listeners....

The next morning, he was in his new office, charging about with quips and jests. He promptly issued an executive order to increase food allowances in depressed areas. In the afternoon, he presided over the swearing in of his new Cabinet. The reception that followed turned into a children’s romp, as the new official offspring darted about through the halls and rooms of the White House. It was the liveliest affair 1600 Pennsylvania Avenue has seen in at least eight years, and probably will set the tone of the new Administration.

Washington is still responding to this initial display of energy and high spirits. There was never any question but that Mr. Kennedy wanted the job. Of all the candidates he went after it in the most determined and straightforward manner. But nobody ever suspected that he would enjoy it so much. It is a kind of dividend to the nation, which always seemed to approve thoroughly of Mr. Eisenhower, although it may not have derived so much lift from his Administration.

Mr. Kennedy, darting about the city in his first weekend, gave evidence of not feeling entirely at home in his new house. But already he seems to have grasped the office with an exuberance that promises to give his regime considerable momentum. As the trucks carried away the signposts that guided the visitors to the gala, to the ball and to the parade stands, there was no mood of letdown in the city. The first weekend on the New Frontier gave everyone high hopes.

This article also appeared in print, under the headline “Washington Front,” in the October 13, 2008, issue.

Mary McGrory, a journalist and longtime columnist for The Washington Post, won the Pulitzer Prize in 1975 for her coverage of the Watergate scandal. The following excerpts from her 1960s column for America, called Washington Front, app