Days of Awe: Forgiveness, atonement and the High Holy Days 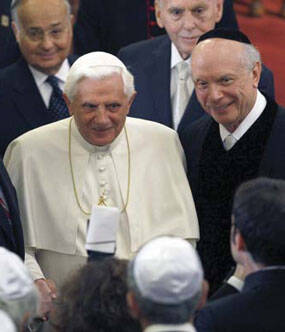 The Jewish tradition has four new year observances, of which the two most notable are Passover, which celebrates the birth of the Jewish people, and Rosh Hashanah, which celebrates the birth of the world. “On this day the world was created,” we read in our Rosh Hashanah liturgy. Rosh Hashanah is a universal moment that demands actions to bring about universal reconciliation. In the Jewish tradition, reconciliation entails a dual process: a personal act of forgiveness by the penitent and an attempt to establish a new relational order between God and man and between man and man.

Following Rosh Hashanah (Sept. 30 this year), Jews observe 10 days of repentance. Maimonides (1135-1204), the great Jewish sage, warns that it is insufficient merely to ask for forgiveness; what is desired is an act of reconciliation.

Surviving the Holocaust forced me to ask myself many difficult questions. After experiencing the beast and best of man, I was in a quandary: Do I rebel against God or try to reconcile myself with God and a failed humanity? Do I give up or sustain my faith in man’s ability to change? I opted to pay a price for survival with a determination to build bridges with people who face oppression and tyranny and to make conciliation and reconciliation my life’s work. From helping to heal the tensions and rifts in Northern Ireland to bringing together warring sides of ethnic conflicts in southeastern Europe, my ecumenical colleagues from the Appeal of Conscience Foundation and I have sought to establish contact with religious communities between East and West who were cut off during the cold war and to make use of our common belief in God to help reconnect hostile nations. The Days of Awe, which call for penitence, prayer and charity, boost our capacity to reconcile ourselves with God and our fellow man.

The last two decades have witnessed numerous historic acts of forgiveness ranging from governments apologizing for the mistreatment of their citizens to religious leaders of one faith apologizing to those of other faiths for past misdeeds.

Apologies alone, however, do not suffice. The High Holy Days require us to be penitent and seek forgiveness if a wrong is committed against God and man. Even after one apologizes, if the apology is not accepted, then one must reach out to the injured party on two other occasions and attempt reconciliation. This law of reconciliation is complemented by a certain posture on the part of the injured parties, namely, being accepting of and merciful toward those who have wronged them.

Forgiveness without acceptance fails to change the facts on the ground. Acceptance without forgiveness allows the perpetuation of senseless martyrdom. Mercy and forgiveness together create conditions that make relational redemption possible. Just as God is the Av Harachaman, Merciful Father, so we must be merciful children in accepting sincere apologies.

The peak of the High Holidays is Yom Kippur, the Day of Atonement (Oct. 9 this year). Atonement is the end result of a long process of repentance that moves from introspection to forgiveness and culminates in reconciliation: to be “at one” with God and man. When the process is completed, not only has the human being changed, but his relationship to those around him has been transformed. Yom Kippur is referred to as a “Sabbath of Sabbaths.” As the Sabbath is a time when man reconciles himself with nature, Yom Kippur is a day when man reconciles himself with God and man.

It is the spirit of reconciliation—not just forgiveness—that stands behind the recent global gestures of rapprochement. The evolving bonds of friendship and cooperation between the Catholic Church and the Jewish people are historic in their ability to create new social and political ties between Jews and Catholics worldwide. The Second Vatican Council’s “Declaration on the Relation of the Church to Non-Christian Religions” (1965) not only apologized for past mistreatment but tried to reconcile Christians with their “older brothers.” Without its declaration that “we cannot truly call on God, the Father of all, if we refuse to treat in a brotherly way any man, created as he is in the image of God,” we would never have witnessed Pope John Paul II’s visit to the Rome Synagogue and Pope Benedict XVI’s visit to Park East Synagogue, my congregation, on the eve of this past Passover. The spirit of reconciliation made our meeting possible and allows Jews and Christians to see each other as having a shared mission in the world.

The admissions of guilt issued by Germany after the Holocaust were accepted by the State of Israel and the Jewish people because they came with concrete measures and attitudinal changes in an outreach to the Jewish people and the fledgling state.

Likewise, the apology issued by the apartheid state of South Africa was remarkable only because it was accepted by a leader who, having spent 20 years behind bars, could respond to his captors’ apologies by saying: “The moment to bridge the chasms that divide us has come.... We enter into a covenant that we shall build the society in which all South Africans, both black and white, will be able to walk tall, without any fear in their hearts, assured of their inalienable right to human dignity—a rainbow nation at peace with itself and the world.” Without Nelson Mandela’s acceptance and the government’s willingness to change the facts on the ground, all the apologies in the world would not have sufficed.

Conversely, we still await a true reconciliation among Christians, Muslims and Jews, in which peace will triumph over the misunderstanding and demonizing of the other. Only then will Isaiah’s words become a reality: “And the wolf shall dwell with the lamb, and the leopard shall lie down with the kid” (Is 11:6).

May Rosh Hashanah, the anniversary of the creation of the world, inspire us to help perfect an imperfect world. May God spread the canopy of peace over us all. May we help God establish that peace through reconciliation, tolerance and reciprocal respect.

Rabbi Arthur Schneier is president of the Appeal of Conscience Foundation and senior rabbi at the Park East Synagogue in New York City.