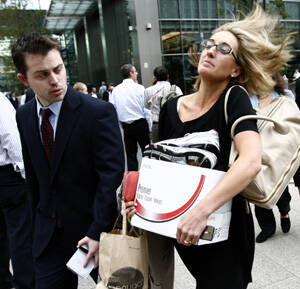 The august investment firm of Lehman Brothers, founded in 1850, weathered the American Civil War, two World Wars and the Great Depression. Yet over a few days in September, the firm collapsed in the wake of the credit crisis that has roiled financial markets around the world. It was one of several stunning developments that included the sale of the venerable Merrill Lynch and the transformation of Morgan Stanley and Goldman Sachs into bank holding companies, as well as the government’s near-takeover of the mortgage behemoths Fannie Mae and Freddie Mac and the insurance giant American International Group. On Sept. 19 Treasury Secretary Henry Paulson Jr. asked Congress to allow the government to purchase $700 billion worth of problem mortgages to put an end to the crisis. Overall, the government bailouts could deliver a bill of $1 trillion.

Certainly there is enough blame to go around. Exper-ienced C.E.O.’s of giant financial institutions should have known better than to risk investors’ assets in complex financial instruments that few people understood. Robert Rubin, the Treasury secretary under President Bill Clinton, told “The NewsHour With Jim Lehrer” that most people who deal with these instruments “probably do not fully understand all the risks that are embedded in those instruments that can materialize under unusual circumstances.” These ill-understood instruments were then bundled and sold multiple times, like hot potatoes, to other investors.

C.E.O.’s were not the only ones who profited from the “credit culture.” Ordinary people grew complacent in the growing value of their single major asset, their homes, and refinancing became commonplace across the middle class. Loan officers offered mortgages to customers who were not credit-worthy. This practice preyed on the poor, but for others it fostered a credit culture in which speculating in real estate was as easy as visiting the nearest bank. Popular television shows, like A&E’s “Flip This House,” promoted get-rich-quick schemes for the middle and upper classes.

Since the days of the Carter administration, deregulation has been a bipartisan policy. Regulation during the Clinton and Bush administrations, however, was particularly lax. As long as the Dow kept rising, both were reluctant to place any restrictions on new financial instruments. The present administration could, for example, have empowered the Treasury Department to study more closely the reasonableness of mortgage-backed securities. Indeed, William H. Donaldson, a Republican who served as chairman of the Securities and Exchange Commission, resigned his post after the Bush White House resisted his pleas for greater regulatory oversight.

The debacle offers a warning to those who place their faith in a market system free of regulation. The “efficient market hypothesis”—the notion that the market optimally allocates resources—assumes that full information will enable investors to weigh risk carefully when making investment decisions. On this assumption, poorly performing C.E.O.’s and fund managers would be penalized by falling stock prices and poor financial reports. Yet when the information is so complicated that few—even those on boards of directors—can understand what is being traded, we see what economists all too coolly call “market failure.” In such circumstances governments must regulate.

Given the globalization of debt in today’s financial networks, Secretary Paulson’s proposal for a bailout is necessary to avert a worldwide economic meltdown. The failure of mortgage brokers, investment houses and A.I.G. makes the future prospects for ordinary people ever more precarious. The cost of the bailout will also make the government less capable of assisting the needy both at home and abroad for a very long time. Even before the present crisis, the rise in the price of foodstuffs and gasoline had precipitated food riots around the world. Saving the financial institutions will provide only a limited cushion for those always most vulnerable—the poor and the lower-middle class. Here in the United States, they will find it harder to obtain home mortgages. Globally, the millennial hope of cutting world poverty in half by 2015 will almost certainly become a faded dream.

Still, as the bailout endeavors to prevent an even more dire collapse, steps must be taken to prevent worsening impoverishment at home and abroad. Without equity, there will be no financial stability. The test of leadership will be to articulate a new design for the economy predicated on human solidarity, in which the costs will be fairly allocated and the benefits shared by all. For the burdens must be borne for generations to come. It will take rare honesty, an exceptional degree of persuasion and an unswerving sense of justice to lead the nation on a new path. It is time to pull together for the common good. Self-interest has had its day and has failed us all.