Conscience and the Catholic Voter: Ten things to remember this fall 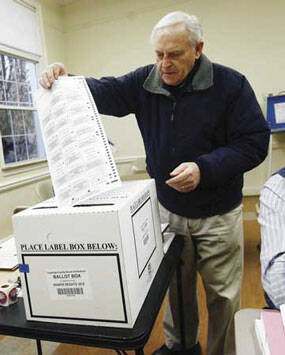 The 2008 U.S. presidential and Congressional elections present a challenge for Catholics. Catholic voters may experience frustration because they agree with some of what the candidates seeking office say, but not with all that they espouse. The “life issues” are absolutely crucial as we make decisions. But what should voters do if an otherwise acceptable candidate falls short in concern for alleviating poverty or promoting just working conditions, access to health care and affordable housing?

Catholic voters are wary when truth becomes a casualty of political warfare. Instead of seeking to bring together a polarized nation, campaigns too often exacerbate divisions. For the sake of a political victory, politicians often create enemies, and so the positions of opponents are twisted and missteps become a reason to pounce on them mercilessly. Faced with what some call “the choice between the evil of two lessers,” thinking people may wonder, why vote at all.

With this in mind, here are 10 things to consider during the November election.

1. Not all issues are equal. Life issues are paramount among all issues because the right to life is fundamental. All other rights are based on it. Simply put: You can never take an innocent human life. Embryonic stem cell debates are not about scientific advancement; they are about sacrificing a life, however small, for possible scientific gain. The church bans embryonic stem cell research because tiny human beings are sacrificed for their stem cells. Instead, the church encourages adult stem cell research.

2. You have to work to become informed. A Catholic must be informed both intellectually and morally. Getting one’s head around an issue means gathering information. A key source of information is the U.S. bishops’ Web site (www.faithfulcitizenship.org), which includes the text of Forming Consciences for Faithful Citizenship: A Call to Political Responsibility, by the Catholic bishops of the United States. The statement explains the teachings of the church that can help Catholics form their consciences in order to make moral choices in public life.

Other good sources of information include the Catechism of the Catholic Church and its companion, the Compendium of the Social Doctrine of the Church. The United States Catholic Catechism for Adults also provides updated teaching on issues such as justice and poverty. Many Catholic colleges offer programs and lectures on Catholic social thought, and church periodicals explore contemporary issues.

Principles of social justice ought to guide decision-making. Among them is the principle that people have a right to jobs that pay a living wage and a right to join a union. People have a right to affordable and accessible health care. In 1935, when the elderly were facing an economic crisis in the wake of the Depression, the government under President Franklin D. Roosevelt recognized a basic right to a decent life, which led to the creation of the Social Security system. There is a comparable need today for access to health care.

Opposition to unjust discrimination is another principle of social justice. Racial, ethnic and religious discrimination, both overt and subtle, have no place in society. Catholics are called to defend against discrimination, whatever its roots. All are children of God, and all fellow citizens are our brothers and sisters. A society that discriminates unjustly diminishes not only the victims of discrimination but the society itself. Such discrimination seems to rise up whenever people feel economic or other pressures in society.

Our current immigration system violates those principles related to opposing discrimination, respecting the dignity of every person, defending the family and protecting the dignity and rights of workers. We need to replace a dysfunctional system with a system of immigration laws that work and can be enforced.

Being informed requires keeping up-to-date with developments in church teachings, such as what constitutes a just war or whether there is such a thing as a “legitimate preventive strike.” Catholics must work to avoid war. People and nations have a right to defend themselves, but any response to aggression must be proportionate. If someone shoots you, you cannot annihilate his or her whole family or country to send a message. The Catechism of the Catholic Church also points out that the use of arms must not produce evils and disorders graver than the evil to be eliminated. Given the power of nuclear weapons at a nation’s disposal today, it is hard to conceive a justification for their use.

Church teaching on the death penalty also has developed in recent decades. The catechism states that the death penalty is not acceptable if there are alternative means to keep a criminal from harming others. Penal sentences, such as life sentences without parole, protect society and make the death penalty seem to be based more on a desire for vengeance than for justice.

3. God speaks through our hearts and minds. Wise decision-making speaks through the stirrings of the heart, which reflect lived experience. Hearts are moved, for example, when people see immigrants huddled together waiting for employment so they can support their families. They are moved when shoppers overhear people without health insurance ask a pharmacist if a non-prescription medicine will cure strep throat (it won’t). Hearts are moved when people read that a 12-year-old without dental care died of a brain infection that started as an abscessed tooth. Scriptures in defense of widows and orphans call us to be compassionate, to have a preferential option for the poor. Stirrings of the heart must influence our vote.

Compassionate responses move our consciences to make moral decisions. As the bishops say in Forming Consciences for Faithful Citizenship, conscience is more than a mere “feeling” about what we should or should not do (and it certainly does not justify doing whatever we want). Conscience is God’s own voice revealing to us what we must do. As prideful and imperfect individuals, we can sometimes mistake the voice of our own wants and desires for God’s voice. So we must test our consciences by asking whether they are in harmony with the truths of our faith. A properly developed Christian conscience will always be in accord with the teaching of the church. The bishops identify (No. 18) three key steps to forming one’s conscience:

…this begins with a willingness and openness to seek the truth and what is right by studying Sacred Scripture and the teaching of the Church as contained in the Catechism of the Catholic Church. It is also important to examine the facts and background information about various choices. Finally, prayerful reflection is essential to discern the will of God.

4. Fidelity to conscience is more important than party loyalty. Thinking Catholics cannot blindly accept party platforms or the positions of candidates. We have to examine all the issues before voting. Saying, “I always vote Democratic” (or Republican) is an easy but unintelligent approach.

5. Simplistic reasoning is simpleminded. It can be difficult to see clearly in an election year. Voter guides abound, but many are written from a particular political persuasion and some manipulate church teachings to support a partisan cause. The publications of some religious groups read like the Democratic or Republican Party at prayer. Simplistic voter guides that view life as a series of black-and-white choices are unrealistic. Life is not that easy.

6. Gut feelings may be your conscience speaking. Often we cannot articulate a concern, but we still feel it inside. One sign of a gut reaction is becoming uncomfortable with an initial decision. We cannot rest with it, or, as we sometimes say, just can’t stomach it. It does not feel right. This is a call to reconsider a decision or a usual way of acting, to consider whether we have formed our conscience. Having done so, we need to reflect on what God is calling us to do. In politics it means questioning traditional party loyalty because we sense something is just not right.

7. Politics is the art of the possible. Voters need to evaluate the likely effectiveness of proposed policies and whether a candidate is fully committed to them and can act on them. “These decisions should take into account a candidate’s commitments, character, integrity, and ability to influence a given issue. In the end, this is a decision to be made by each Catholic guided by a conscience formed by Catholic moral teaching” (Faithful Citizenship, No. 37).

8. Your neighbor can be an ocean away. As the world grows smaller, the neighborhood does not stop at the corner or even the shore. Global solidarity is a fact of modern life. Such awareness should prompt actions to prevent international violence. The motto of the Catholic Campaign for Human Development, “If you want peace, work for justice,” rings truer every day. Poverty and discrimination breed social unrest. Until ordinary Americans face their obligation to help not only those in need here but also those abroad, the United States will leave itself vulnerable to smoldering rage all over the globe.

9. The political process begins long before you pull the lever in the voting booth. In the Internet age, political involvement can be a matter of a few keystrokes. It is not overly time-consuming to answer polls, send messages and ask the hard questions. It is also easy to contact campaigns and party headquarters. It takes more time, but it is even more helpful to attend rallies and discuss thoughtful questions, to bring up important issues and elevate the overall discussion. Politics is too important to leave to politicians.

10. We hear God in prayer. In our noisy world it is often hard to hear the voice of God. We can, however, create a climate where we can hear God speak through our own selves. Sometimes this happens in church, when we are pulled away from life’s worries and concerns for an hour. It happens too whenever we can remove ourselves from the media bombardment and other noise around us. We need to make time to contemplate our world and move toward an inner peace. We need to bring our political decisions to God.

Standing with God leads us to do the right thing.

Mary Ann Walsh, R.S.M., is the director of media relations for the U.S. Conference of Catholic Bishops in Washington, D.C.