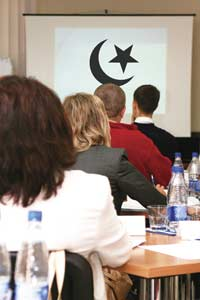 Why are Jesuit universities in the United States hiring Muslims to teach Islamic studies? And why would a Muslim professor leave a well-paying post at a state university to teach at a Jesuit institution? These are just two of the questions raised earlier this year at a meeting of Muslim professors of Islam at Jesuit universities, which was held in Washington, D.C. The meeting was organized by the national coordinator for interreligious dialogue of the U.S. Jesuit Conference, and Jesuit and Muslim scholars from nine Jesuit institutions took part.

Marcia K. Hermansen, a professor of theology and director of the Islamic world program at Loyola University Chicago, emphasized an important distinction between “the academic aspect of teaching Islam and the personal dimension of being myself Muslim.” She argued that Jesuit institutions can offer an opportunity for Muslims in the United States to deepen their own understanding of the faith experience: “I see ‘faith examined’ as an important Jesuit value. Most religious schools and institutions in the U.S. Muslim community focus on piety and identity but do not critically reflect on the experience of faith and the meaning of tradition. The academic study of Islam serves a purpose that cannot be addressed by simply providing a place for prayers.”

Irfan Omar, of Marquette University’s theology department, pointed out that the value of teaching Islam in a Jesuit university is not limited to the Muslim students. “The continuing challenge facing Jesuit institutions and all educational institutions, for that matter,” the Indian-born scholar reminded the meeting, “is how to provide students with the widest possible exposure to important relationships. Success in business depends on creating networks and intercultural exchanges. But such efforts should go beyond commercial perspectives. Muslims can play a significant part in this process as Islam and the Muslim world are constantly on display in the American media.”

Amir Hussain of Loyola Marymount University in Los Angeles, who moved there from the California State University system, said that his original motivation was a personal desire to learn theology. As he explained in an article in Cross Currents (summer 2006): “I soon realized that as a Muslim teaching Islam, I needed to learn more about theology. In 2005, the opportunity arose for me to move to Loyola Marymount. Prior to this move, my only formal connection to the Catholic tradition was that I was born in a Catholic missionary hospital in Lahore.”

Beyond his personal desire for deeper theological understanding, Hussain found another attraction to teaching in a Jesuit institution: its emphasis on excellence in teaching combined with a concern for justice. Hussain said he wanted to help students “learn to learn,” rather than simply “learn to earn.” Since he had come from a working-class background in Toronto, Hussain said he was impressed by the emphasis on social justice in Jesuit history. He cited such examples as the Jesuit Reductions (efforts to protect and catechize the native people) in 18th-century Paraguay, as well as Jesuit participation over the past 40 years in the development of liberation theology and the martyrdom of six Jesuits and two of their lay companions in El Salvador in 1989.

A Diverse Group of Muslims

Muslim scholars who teach Islam at Jesuit universities are themselves a mixed lot. Some of them, like James Morris of Boston College and Marcia K. Hermansen of Loyola University Chicago, are American-born Muslims. Others, like Umeyye Isra Yazicioglu of Saint Joseph’s University in Philadelphia, Ibrahim Kalin of Georgetown’s Prince Alwaleed Center for Muslim-Christian Understanding and Zeki Saritoprak of Cleveland’s John Carroll University are of Turkish origin. Irfan Omar was born in India, while Amir Hussain was born in Lahore, Pakistan, and raised in Toronto.

What led these men and women to teach Islamic theology as a profession? Zeki Saritoprak attributes his teaching vocation to one of his high school teachers: “He said that my knowledge of religion was good and suggested that I make divinity school my first choice in the university placement exam.” Later Saritoprak went to Egypt and improved his Arabic for four years while completing his doctoral thesis; his degree is in Islamic theology.

Isra Yazicioglu’s interest in religious studies grew out of conflict: “I was a student in a medical college in Istanbul,” she said. “In my third year at Marmara Medical School, a ban on head covering was imposed on my campus and on other campuses in the country. It was painful to experience this kind of discrimination when I had paid equal taxes and earned entry to a medical school like everyone else. This ban made me think more about the role of religion and the relation between religion and science.” She was disturbed that some of the professors in favor of the ban considered all religion as superstition. “It made me want to study religion to seek a more sophisticated view of faith. I left the university and got a scholarship to study at Hartford Seminary where I did my master’s thesis comparing Paul Tillich and Said Nursi on reconciliation of faith and reason in the modern age. Then I did my doctoral studies at the University of Virginia on the philosophical and theological implications of miracle narratives in the Koran.”

Participants at the meeting discussed the prospects for greater cooperation among Jesuit universities in promoting Muslim-Christian understanding. Marcia Hermansen sees a range of possibilities. The universities could offer joint study-abroad programs in Muslim countries and join together to recruit specialists in Islamic topics; they could cooperate in shaping retreat programs for Muslim and Christian students; and they could promote service opportunities in the Muslim world in areas related to international development. She also suggests that Jesuit institutions encourage Muslim-Christian dialogue on distinctive areas of strength in Jesuit programs, such as “ethics, service, formation and vocation.”

Hermansen also notes that gender studies are a fertile field for Muslim-Christian cooperation. Loyola University Chicago, for example, already has a master’s program in women’s studies and gender studies. Programs like these, she suggests, could work together with institutes in Muslim-majority countries and with Muslims in the European and North American diaspora to identify and develop leadership skills among Muslim women.

Hiring Muslim professors to teach Islam presents Jesuit universities with a new set of challenges, as well as some valuable insights into the basic educational experience. As Umeyye Isra Yazicioglu explains: “My experience has been wonderful so far. My colleagues and administrators are very supportive and friendly. I do not believe that religion is superstition, nor is it in conflict with reason and science. I am glad to have the opportunity to help my students approach religion with sophistication and be critical of the approaches that pit religion and reason against each other. I keep telling them that by using the case of Islam I want them to improve their skills in understanding the fundamental religious experience, and their own traditions in particular.” Yazicioglu tries to help students appreciate the diversity of interpretations of religious texts and the relevance of transcendence to daily life. “I also encourage them to recognize the problems that can be created by superficial interpretations of the scriptures and rituals,” she says. “I am glad that my objectives in teaching match the university’s Jesuit aims of training strong, sophisticated and committed individuals.”

This article also appeared in print, under the headline “An Unusual Partnership,” in the September 15, 2008, issue.