Mercy Toward Our Fathers: Difficult as it may be, forgiving priests guilty of abuse could be the key to healing. 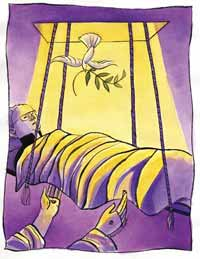 On a frigid night last January, Joseph R. Maher, a successful businessman and president of Opus Bono Sacerdotii, spoke at a parish on Long Island in New York. Opus Bono’s mission is to provide help for priests who have been expelled from ministry because of accusations of sexual abuse. In the audience were priests, abuse victims and members of Voice of the Faithful. Although the opening prayer called for healing and reconciliation, the tension in the room militated against both.

In his talk, Maher argued that a large number of accused priests are innocent and that, abandoned by bishops and laity, they are denied the resources to clear their names. He spoke also of the need to give culpable priests opportunities to reform and return to active ministry. And he said that many victims who claim abuse are merely seeking financial gain, and argued against the suspension of statutes of limitation in cases of sexual molestation.

Although every one of Maher’s points had some validity, his failure to nuance them incited the audience. One after another, individuals came to the microphone to voice criticism of Maher’s insensitivity. What began as a good-faith attempt to bring together people concerned about both victims and accused priests concluded by exposing what one person in attendance termed “the still open wound on the soul of the church.” The discussion reached its nadir when one woman declared, “For such men no healing is possible.”

What does such a statement imply about the power of Christ’s redemptive love? Has the church, from top to bottom, determined that those who have sexually abused minors are outside of the circle of those whom God can forgive? Is there no grace left for them?

Sexual abuse of minors is widespread; in addition to abuse by priests, many more have been abused by relatives and family friends. What healing can compassionate believers bring to the wounded?

Forgiveness, a key to healing, can be hard. Few betrayed and battered men and women can extend an easy absolution. Many find religious language offensive. For those whose anger and pain are still too overwhelming to consider forgiveness, a giant step might be, in the words of a therapist, to pray for the grace to want to forgive.

There is no question that victims must be appropriately cared for as long as they require it. Settlement money can buy helpful therapy. Systems must be put in place to deal with specific accusations, and all must remain vigilant to prevent today’s children from suffering abuse. Yet while these practices have widespread support, there is little talk of forgiveness of the abuser as part of the formula that contributes to healing.

One hesitates to approach the suffering created by sexual molestation, especially by clergymen, as one hesitates upon entering a surgical ward. We dare not touch the pain. We choose, instead, to leave it to the professionals. Unfortunately, the professionals may not always provide wise counsel. Consider therapists who advise against broaching the topic of forgiveness for fear of increasing the victim’s rage and impeding recovery, or attorneys who forbid contact with the victim because they do not want to risk a lawsuit, or church leaders who fear any wrong step will trigger an explosive media blitz that will further diminish their effectiveness as witnesses to the Gospel.

In this atmosphere, especially when it includes episcopal cover-up, it is not surprising that victims are unwilling to forgive their abusers. Their resistance is understandable. This hurt is not abstract; it is wedded to anger and rooted in pain, injustice, abandonment and a sense of betrayal. Among its long-term damaging effects is the possibility that, if left to fester, it can become a debilitating way of life. To remain immersed in suffering is to extend its power, even drawing loved ones into the circle of pain. Tragically, the children of the abused can be infected by their parents’ anger and obsession, leading to their own loss of innocence.

The Hard Work of Forgiveness

Holding onto anger has been likened to taking a sip of poison every day—not enough to kill, but more than enough to debilitate. Certainly some time must pass before the palliative value of forgiveness can be raised. The question is, how much time? There is no single answer. For some, forgiveness is the work of a lifetime; others manage to forgive more quickly, helped by people with the requisite sensitivity and wisdom.

Forgiveness does not mean forgetting, nor does it rule out punishment appropriate to criminal behavior. The Rev. Richard P. McBrien writes: “To be forgiven from a sin does not carry with it pardon for a crime or a guaranteed return to one’s former employment. A murderer who repents and confesses may be restored to the state of grace, but not to freedom.” Each murder case is judged in terms of mitigating factors, and different sentences are imposed.

Should we not also consider mitigating factors in cases of sexual abuse? Is it reasonable to exclude permanently all the guilty from ministry, to treat a one-time offender the same as a serial predator? Certainly some offenders need to be imprisoned or supervised so that they do not harm again. Some expelled priests find themselves pariahs, abandoned and isolated; in this state, a sense of despair may tempt them to seek victims again. Yet others, earnestly repentant, healed through therapy and support systems, pose no further threat and hold a proven record of dedicated priestly service. Ought we to judge any human being by the worst thing he has done, as if it were the only thing he has done? Can any of us endure that scrutiny?

The late Rabbi Abraham Heschel said that while it is important to consider all sides of destructive and broken relationships, it is essential to include God’s perspective as well. God’s own relentless pursuit of each sinner and saint finds expression in the father of the prodigal son, or the lover in Francis Thompson’s poem “The Hound of Heaven”; God longs only for the sinner’s repentance and homecoming.

Persons sexually abused as children might take some direction from the poet Maya Angelou. She was raped when she was 7 years old. So brutal was the violation that she was hospitalized. From her bed of pain and shame she spoke the rapist’s name. Arrested and released, he was later found kicked to death. Because she had uttered his name, the child blamed herself for her abuser’s death. Like others before and after her, she felt culpable, if not for the rape, then for its consequences. As a result, she refused to speak for five years. In her self-imposed solitude she became an avid reader, drinking in the wisdom of the ages from Shakespeare to Langston Hughes. Sitting silently in church, she would concentrate on the inflections preachers used to convey their passion. When she was ready to resume speaking, she had much to say and the tools with which to say it. Since then, she has embraced this formula for self-healing: One who has suffered a great evil must name it, learn from it, forgive it and move forward with courage and focus on the future. Forgiveness had no power to change her past, but it had enormous power to mold her future.

Many years ago during a television show on evil, Bill Moyers said: “Victims of evil must cope with the ugly graffiti that is scribbled on the walls of their psyche. Can they forgive the evildoers? Should they?” An answer can be found in the wisdom of the Quakers, who remind us that “forgiveness is a gift we give ourselves.”

Camille D’Arienzo, R.S.M., is a member of the Mid-Atlantic Community of the Sisters of Mercy of the Americas.