God & 'The Dark Knight': The surprising religious imagery at the heart of Christopher Nolan's blockbuster 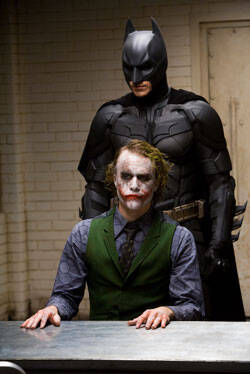 A Tale of Good and Evil

What is it that we love about Batman? Why has “The Dark Knight,” director Christopher Nolan’s latest addition to the comic book franchise, made so much money and attracted so many fans? Of course it could be the gadgets, the jaw-dropping car chases or the chiseled cheekbones of Christian Bale. I suspect, however, that its popularity stems in large part from its close resemblance to another famous story of good and evil.

I saw “The Dark Knight” when it first was released, but it was only later, when I was discussing it with a close friend, that I realized just how theological it is.

Consider the story of Bruce Wayne/Batman. Bruce’s father is building a better world for the people of Gotham, yet it is up to his son, Bruce, to finish his work. Meanwhile, Batman’s good works are looked upon skeptically by the authorities and citizens of Gotham, though there are a few followers—especially children, such as Lieutenant Jim Gordon’s son—who see through the uncertainty and understand Batman for what he truly is. Batman’s debt to the Gospel stories seems indisputable.

One of the questions Nolan struggles with is what it means to be a hero. A hero is obviously someone who fights for good and saves the day—but are not heroes also supposed to be beloved by those he or she serves? Bruce/Batman is certain he is helping the city, but the citizens are not so sure. Is he truly a hero, or simply an uninvited vigilante? Ultimately, Batman “becomes” what Gotham wants him to be—a criminal—by taking the wrap for Harvey Dent’s crimes because it is ultimately best for Gotham. One can’t help but be reminded of Jesus’ capture and trial by Pontius Pilate. When asked if he was the king of the Jews, Jesus’ only reply is, “You say so.” Christ did not protest when his people put him to death in the place of another criminal, because, after all, he was dying to save us from sin and death.

The Joker, meanwhile, bears an uncanny resemblance to what Revelation calls “the Adversary.” Heath Ledger’s sinister portrayal of the Joker makes Nolan’s film much more intriguing than Tim Burton’s "Batman" (1989). From the beginning we see that the Joker is disturbingly smart—in the opening scene his plan to rob a bank unfolds with terrifying efficacy. Next we find out that despite his wacky appearance he can hold his own with the dirtiest of Gotham’s criminals—in a few short scenes he shows the Gotham mob what he is capable of. Yet what perhaps the most unsettling aspect of the Joker is that he is nameless.

Batman and the police have no records on him, and even his own story of how he got his scars—how he became the man he is—changes throughout the film, leaving the viewer without any sense of purpose to the chaos he is creating. Evil is always troubling, but purposeless evil cannot be reckoned with. The Joker is not interested in money, or even, it seems, power. What he is interested in is chaos. He seeks nothing more than to disrupt the flow of life in Gotham, as he tells the convalescing Harvey Dent:

“Do I really look like a guy with a plan? You know what I am? Im a dog chasing cars. I wouldnt know what to do if I caught it. You know, I just do things. The mob has plans, the cops have plans, Gordons got plans, you know. Theyre schemers. Schemers trying to control their little worlds. I am not a schemer. I try to show the schemers how pathetic their attempts to control things really are.”

How many times in Scripture do we encounter the “Evil One” cunningly creating chaos in the lives of others? Just like the Joker, the devil has no discernable form or story, no apparent motive aside from pulling people away from the path toward goodness. The Evil One focuses on people’s weaknesses and exploits them, just as the Joker did with Harvey Dent, appealing to his deep desire for justice to persuade him that the only true form of justice is chaos.

Perhaps I’m making too much of “The Dark Night.” Maybe it’s just a good flick, entertaining and action-packed. Ultimately, however, I think there is something more behind its popularity. We are made in Christ’s image, and we all have the ability to be like him, to sacrifice ourselves for the good of others. At the same time, we have all fallen prey to the temptations of the “Evil One.” With “The Dark Knight,” Christopher Nolan has tapped into the deep divide in the human heart, and put it all up on the screen for us to see.

We Can Be Heroes

"The Dark Knight" is certainly an intense film. As we watch this classic story of good versus evil, the audience is left sitting and wondering: how will it all turn out this time? Religious imagery can be found in both Batman and the Joker, but I want to focus on two other figures in the film. Both Harvey “Two-face” Dent (Aaron Eckhart), the industrious district attorney struck by tragedy, and Lieutenant Jim Gordon (Gary Oldman) represent characters that the audience can relate to. The “Dark Knight” and his nemesis may entertain us with their outsized portrayals of good and evil, but in the end we know they are only cartoons. Dent and Gordon, on the other hand, can look eerily like ourselves.

As we watch Dent “clean up Gotham City” without wearing a mask, we see a human depiction of goodness very unlike Batman. We place our faith in this lawyer extraordinaire as he relentlessly pursues Gotham City’s criminals. Yet our faith turns out to be misplaced. Christ warned his followers to “Beware of false prophets, who come to you in sheep’s clothing, but underneath are ravenous wolves” (Mt 7:15). Dent proves to be such a prophet. He is the secular messiah who ultimately disappoints his followers.

By the end of the film it becomes painfully obvious that Dent is a dualist. Theologian Elizabeth Johnson notes that, in practice, Christians are far more likely to view Jesus as “truly God” than “truly human,” even though he is of course both. Dent, perhaps more than any other character in pop-culture, exemplifies this unhealthy dualism. The audience is so quick to embrace Dent as a savior that we forget that not even Batman is without fault. Behind the mask, he is only Bruce Wayne, a flawed human being.

Batman’s view of Dent is clouded by their one common object of affection – Rachel Dawes. The one character who is able to view Dent with cautious clarity is Lieutenant Gordon, the loyal police officer. He may be the only practicing Christian in the film. There is no reason to believe that his strong ethical approach to fighting crime (even more ethical than the incredibly violent Batman) is not born out of religious belief. We don’t need to see Gordon praying in Gotham City Cathedral to understand that he places his faith in something greater than Harvey Dent.

Unlike his counterpart Dent, Gordon remains a character the audience can admire. In his role as police officer, he is able to practice a number of the works of mercy, both corporal and spiritual. The most poignant of these moments is from "Batman Begins," when he comforts the afflicted as he is the first to console young Bruce Wayne after he witnesses the murder of his parents. In "The Dark Knight" he visits the sick Harvey Dent in the hospital and, later, buries and prays for the dead. As one of the cops who isn’t corrupt, he is constantly admonishing sinners, bearing wrongs patiently and forgiving offences willingly. All the while, he is still able to do his job. He is no Lazarus figure, who needs miraculous assistance to come back from the dead. To the surprise of Gordon’s son (and the audience), this time it is Gordon who saves Batman. And he saves him with the same gifts and graces that we have been given.

The antics of Batman and the Joker may thrill us, but in the end we can learn from the more human examples of sin and grace found in Harvey Dent and Jim Gordon.

Daniel Cosacchi is an assistant professor of religious studies at Marywood University in Scranton, Pa. He is the co-editor of The Berrigan Letters: Personal Correspondence between Daniel and Philip Berrigan (Orbis, 2016).