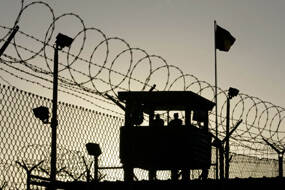 A chain of decisions by the U.S. Supreme Court has left the Bush administration’s detention program for so-called enemy combatants in shambles. In particular, the decisions put the detention program at Guantánamo Bay, Cuba, in legal limbo. Only last year Congress renewed the far-reaching Military Commissions Act, which allows the executive wide discretion in terrorism cases. But this June 12, in a 5-to-4 decision, the Supreme Court ruled that suspected terrorists held in detention have the right to appeal for habeas corpus, that is, the right to challenge their detention in federal courts. The decision in Boumediene v. Bush undercuts the administration’s claims to extraordinary emergency powers in the war on terror. This decision affirms once again that even a war on terror must be a law-governed activity, where executive action is not beyond appeal.

Confronting terrorism by police methods is frequently derided as ineffective, and military means are promoted as an appropriate tool for combating terrorists. But criminal prosecution against the 1993 World Trade Center bombers proved more successful than the military campaign against Osama bin Laden and Al Qaeda. The ’93 bombers are in prison; bin Laden is still at large. A criminal approach to terrorism, however, comes after the fact. What are authorities to do when they believe a large-scale terrorist act is imminent? Is there a place for preventive detention in the struggle against terrorism? The mass killing threatened by post-9/11 terrorists does require preventive measures, but not measures that deprive suspects of the basic right to challenge their arrest and detention. Such prevention, as practices in other countries like Britain show, should not place suspects beyond legal redress.

The Boumediene and earlier court decisions have forced the reworking of U.S. detention policy. In Hamdi v. Rumsfeld (2004), the Supreme Court ruled that U.S. citizens declared unlawful enemy combatants retained their right to seek habeas corpus. In Hamdan v. Rumsfeld (2006), the court ruled that detainees could challenge the military commissions set up to adjudicate their cases, and it overturned a provision of the 2006 Defense Appropriations Act that attempted to exclude such cases from judicial review. In June 2007 the court agreed to hear the appeals of Guantánamo detainees seeking review of their cases, and with this latest ruling it upheld their right to habeas corpus. Detainees will no longer be lost in a counterterrorist netherworld for life, but will be informed of the charges against them and better able to rebut them in court.

Three tasks lie ahead for the government, the military and the legal profession. First, the courts, the military and the Department of Justice must find ways to adjudicate speedily the pending and potential cases of Guantánamo detainees. Second, the three branches of government must institute policies to implement habeas corpus in cases of alleged terrorism. Third, new ways to prevent terrorist acts must be explored and developed without creating obstacles to legal review or allowing unlimited executive discretion in the name of national security. Any new preventive measures must be reconciled with the protection of personal rights. Furthermore, identification of people as enemy combatants, except on the battlefield, must be abandoned; and indefinite detention without legal supervision or appeal should be proscribed as an instrument of tyranny.

Finally, in the years ahead our country must still come to grips with our national acquiescence to the politics of fear, which has led to the detention and abuse of hundreds of individuals. Among the necessary steps will be restoration of freedom to innocent detainees, accompanied by public apology and some monetary restitution for the years they lost to incarceration. Furthermore, Congress needs to accept responsibility for its complicity with the executive in laws that denied suspects rightful appeal. A national truth commission should be instituted to establish political accountability for the decisions, policies and statutes that placed suspects outside the protection of the law.

Congress might create a bipartisan commission in the style of the Iraq Study Group (members of both parties have criticized the detention system), or, failing Congressional action, a broad association of foundations and human rights groups could organize such an effort. A truth commission should not engage in a witch hunt, but make a serious effort to understand the subversion of the rule of law in the post-9/11 panic and to build a barrier of public opinion and professional responsibility to prevent similar failure in the future. If the nation does not make a collective effort to come to grips with the subversion of liberty in the name of security, we will leave ourselves and generations to come vulnerable to still greater violations and silent coups d’état.