Will They Serve?: A new survey looks at young people's attitudes toward ministry. 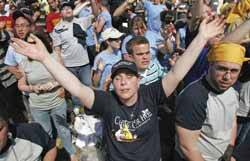 Where will the next generation of Catholic leaders come from? As the average age of priests and religious continues to climb, this question must not be ignored. Finding ways to encourage young people to consider a life of ministry is a crucial task for all members of the church.

The first step toward a solution is to look at young adults’ attitudes toward ministry. How many young Catholics seriously consider a life of ministry as a priest, religious or lay minister? Why do many opt for other professions? Would a relaxation of the church’s rule of celibacy draw more young people to the church?

To answer such questions, the Emerging Models of Pastoral Leadership project, a joint effort of six national Catholic associations funded by the Lilly Endowment, commissioned a survey of Catholic young adults. Here we offer a brief summary and analysis of those results. The full report can be found at www.emergingmodels.org.

We began the study in summer 2006. Working with a committee of young adults and pastoral leaders, we set out to conduct a nationwide survey of Catholics between the ages of 20 and 39. Since we are chiefly interested in the views of young adult Catholics who are active in church life, we asked Catholic campus ministers and diocesan directors of young adult ministry to invite young adults on their mailing lists to participate in an online survey.

Two such surveys were conducted. The first focused on college students. Usable responses were received from 421 students at 19 of 20 randomly selected Catholic, public and private schools around the country. The second survey focused on college graduates from dioceses around the country. (The names were collected from diocesan directors of young adult ministry, and for the purposes of this analysis are referred to as the “diocesan sample.”) A total of 486 usable responses were received from 12 of the 13 randomly chosen dioceses, one diocese in each episcopal region. Of those responses, approximately half came from young adults in their 20s and half in their 30s. In addition to the online surveys, 25 personal interviews were conducted; 15 of those interviewed are currently working full time as lay ecclesial ministers. An additional 30 college students participated in four focus groups.

Interest in a Life of Ministry

Young adults see both lay and ordained ministry as a call from God. In both samples, 80 percent said lay ministry and 90 percent said ordained ministry is a response to God’s call. They find ministry inviting because it allows them to share their faith and use their gifts. One young man in his 20s said, “I am interested in full-time work as a lay minister serving the Catholic Church because I can think of no better way to use the gifts God has given me than to give them back to him in joyful service to his church and people.”

Respondents who expressed an interest in lay ministry were primarily interested in working with young people, either by providing religious education or teaching in a Catholic school. In our diocesan sample, 83 percent of men and 69 percent of women expressed serious interest in a career as a youth minister. A significant number of college women (73 percent) indicated an interest in teaching.

Respondents cited a number of reasons for considering a life of vowed ministry, including “It is a response to God’s call” and “It is an opportunity to help other people.” Very few—only 6 percent of college men and 10 percent of women—cited “prestige” as a reason for considering a vocation. Instead, most see a vocation as a way to be holy and closer to God. One young man said, “It is an answering to a call I may have, and it would be an amazing thing to help others find their faith and to help them in their time of need.”

So why aren’t large numbers of young adults coming to our seminaries, convents and lay ministry formation programs? We asked all respondents to tell us what deters them from choosing a life of ministry. They cite several reasons. First, most want to be married and raise a family. That rules out priesthood and the religious life. Fewer than 30 percent of men in both the college and the diocesan samples would change their minds if the rule about celibacy were to be changed.

What Can the Church Do?

Given these apparent roadblocks, how can the church tap young adults’ interest in ministry? How do we reach the next generation of ministers? First, the church needs to involve young adults in their faith. We can no longer assume young adults will be active in the life of the church. Our survey shows that when young people are actively involved in the church, the likelihood that they will consider ministry increases. When the level of involvement in parish or campus ministry increases, so does interest in ministry. For example, 52 percent of those in campus ministry leadership indicated an interest compared with only 16 percent of those not regularly involved. In the words of one young adult:

I think that the church really needs to stress more for teens and young adults. Many large parish churches, like my own, do not have much for people after confirmation. My mother and I have been working hard to try and establish something in my church, but it is difficult. I love my Newman Center. I wish we could have something like this within my own home parish.

The church should seek to encourage the formation of communities in which young people feel like their church is their home and that their faith is important to them.

Second, the church needs to find ways to connect with young adults. From other research conducted by the Emerging Models Project we have learned that an important way for parishes to reach young adults is through the use of technology. Parishes need to have active Web sites. Some pastoral leaders are recording their homilies or classes as podcasts for young adults to listen to when they have time.

Third, our study shows that while most young adults have discussed their interest in ministry with family and friends, few pursued their inquiry with career counselors, and only a quarter sought the counsel of a diocesan vocation director. Perhaps if they had done so, they could have been helped to see a connection between their gifts and talents and ministry. This indicates a need to develop more awareness among young adults of the presence and role of diocesan vocation directors. Indeed, one of the top recommendations made by participants at the National Ministry Summit convened by the Emerging Models project was an invitation to vocation directors to expand their ministry to include recruitment for lay ecclesial ministries.

Fourth, young adults want the church to provide better support for lay ministry. Half of the college respondents and 60 percent of the diocesan sample agreed with the statement that “the Catholic Church needs to move faster in empowering lay persons in ministry.” One 22-year-old woman said, referring to the U.S. bishops’ document on lay ecclesial ministry published in 2005:

I think we have to market the opportunity to serve professionally in the Catholic Church and also ask for more support from the bishops and folks in the top echelon. Not many people know about Co-Workers in the Vineyard, and they need to know that we need their talent and willingness to serve, and their passion. And so, get the word out that the church as a whole, especially the clergy, is fully in support of lay ministers. People don’t know that. And people don’t know that we are considered valuable by our bishops.

This study is a beginning. The next generation of pastoral leaders, lay and ordained, is already active in the church. And we know that future studies must focus on the fact, which is growing in importance, that many young adults come from different cultural backgrounds; and their pathways into ministry will reflect that. At the conclusion of the study, young adults were asked what they would like to tell the church’s leaders about the direction of the church in the years ahead. Their answers are clear. Pay more attention to youth, college students and young adults. Teach young adults about their faith. Empower laypeople. And focus on love and forgiveness.

Our results show that young adults in their 20s and 30s have already made life decisions that have steered them away from future ministry. Apparently we reached them too late. Had church leaders appealed to them at an earlier age and more convincingly, more might have seen ministry as a serious option. This conclusion is reinforced by the insistence of our respondents that the church give more energy and resources to youth ministry. Nobody should assume that children of Catholic families will automatically be good prospects for future ministry. Rather, we need to “actively recruit them”—now—into life in the church and into ministry.

From the archives, a profile of young Catholics from 1999. Read it here.

An encouraging reason to consider lay ministry is that it is...

A reason I would not be interested in lay ministry is because...

Ordination — if celibacy were not required

Ordination — if women could be ordained