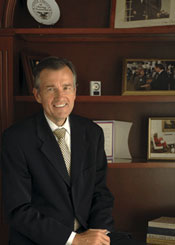 Doug Kmiec is a former appointee of the Reagan and Bush I administrations, a former dean of Columbus School of Law at The Catholic University of America, currently a professor of law at the conservative Pepperdine University and a longtime pro-life activist. In February, to the surprise of his colleagues, he announced his support of Barack Obama for president. Professor Kmiec reasons that after more than three decades seeking to overturn Roe v. Wade, it is time to look at alternative approaches to preventing abortions. Among these is Obama’s recommendation for community education of pregnant mothers. “Good, evenhanded information and genuine empathy and love,” Kmiec has said, “save more children than hypothetical legal limits—which, as best as I can tell, have saved: well, zero.” For that political offense a priest whom he will not identify denied Kmiec Communion at a private Mass celebrated in advance of an event at which the lawyer was to speak.

The denial of Communion to a committed pro-life activist who, after firsthand experience of the political wars, judges new options must be tried demonstrates the absurd and uncharitable extremes to which the pastoral practice of excluding Catholics from Communion on political grounds can descend. Furthermore, after three professedly anti-abortion administrations since 1981 have failed to end abortion, one must in all honesty ask whether a hard-line pro-life position within the church serves as a Trojan horse for other, more partisan political goals. The church must continue to form the consciences of politicians, and anything-goes, pro-abortion politicians should not expect the church’s blessing. Nonetheless, such a denial of the sacrament in the election season remains both politically inept and pastorally offensive.

“One final thing, Lord, I promise,” prayed Msgr. James Lisante during an invocation at a Republican fundraising dinner in New York City. “This November,” he said, “could you keep an eye on all of us and see that the change that we embrace comes from Arizona and not Illinois?” A few days earlier, the Rev. Michael Pfleger, pastor of St. Sabina’s Church in Chicago, mocked Senator Hillary Clinton from the pulpit of Trinity United Church of Christ. “I’m white. I’m entitled,” he said, pretending to be Senator Clinton. “There’s a black man stealing my show!” Father Pfleger was instructed by Cardinal Francis George, archbishop of Chicago, to take several weeks off in order, as the cardinal put it, to “reflect on his recent statements and actions in the light of the church’s regulations for all Catholic priests.”

There are multiple reasons why Catholic priests are not permitted to take partisan positions. Among them: the church should be a sign of unity, representing all Catholics, not simply Democrats or Republicans; and parishioners object when their pastors make one group feel marginalized. There is also the thorny legal issue of tax exemption: secular critics rightly object to a tax-exempt institution making political demands on its members. But there is a deeper reason to avoid making explicit or implicit partisan statements in the context of a sermon or a prayer. Preaching about Scripture and praying on behalf of an assembly are sacred moments. Neither occasion is appropriate for divisive comments. In any case, mocking, belittling or mean-spirited words are never appropriate for a priest—or, for that matter, any Christian.

God and The New Yorker

The New Yorker’s list of special issues seems to multiply every year. Style gurus have an issue of their own, as do gourmands, fiction fans, even cartoon lovers. Now believers can include themselves in this distinguished company. Although the June 9-16 issue was ostensibly devoted to fiction, the true focus seemed to be God. Several prominent authors contributed essays to a series titled “Faith and Doubt,” and the magazine’s literary critic, James Wood, wrote a 4,000-word essay on the problem of theodicy, a term one does not often encounter in the pages of Eustace Tilley’s journal.

Of course there were things to quibble about. The New Yorker would never run a series called “Faith,” one friend remarked, without appending the word “doubt” to soothe the secular reader. And the inclusion of George Saunders’s story about a liaison between a priest and a young nun was an entirely predictable choice. Yet there were moments that surprised too, such as Tobias Wolff’s “Winter Light,” a lovely reflection on the power of art to inspire faith; or the Nigerian Jesuit Uwem Akpan’s understated account of two street children who inadvertently stumble upon the mystery of the Eucharist. Even the essay by Wood, a religious skeptic, was a bracing journey through thorny theological terrain. One does not need to agree with Wood’s idiosyncratic conclusions to admire the seriousness that he brings to his task. He retains a “nostalgia for lost belief” that endows his critique with a quality of fairness absent from the work of the new atheists. And when it comes to the treatment of religion in the secular media, fairness is all the believer seeks.

This article also appeared in print, under the headline “Current Comment,” in the June 23, 2008, issue.