The Duty to Protect 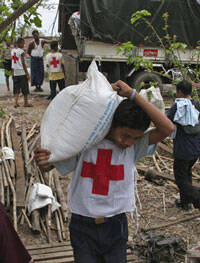 For many days now, British, French and American ships loaded with relief supplies have been sitting off Myanmar’s coast, waiting for permission to enter that country’s ports. The aid is urgently needed. Almost a month after Cyclone Nargis left at least 134,000 people dead or missing in Myanmar, the United Nations estimated that almost 60 percent of the two million people affected by the catastrophe had yet to receive assistance. The primary culprit for the delay is Myanmar’s intransigent military, which appears to be more concerned with preserving control over the population than with saving the lives of their fellow countrymen. U.N. Secretary General Ban Ki-moon at last extracted a promise from Myanmar’s government on May 23 to allow more humanitarian aid into the country, yet relief agencies and Western nations are skeptical that the junta will follow through with all the necessary visas and bureaucratic assistance.

France’s foreign minister, Bernard Kouchner, a former head of Doctors Without Borders, has said that the U.N. Security Council may need to invoke the “responsibility to protect” as a justification for an armed intervention that will force delivery of humanitarian aid. Mr. Kouchner is correct in his assessment that Myanmar presents an important test case for the world’s commitment to the duty to protect, the principle that the international community has a right to intervene when a government either fails to protect its people or has itself violated their rights.

In his recent address to the United Nations, Pope Benedict XVI argued that in such situations the international community has a moral obligation to intervene. “Every State has the primary duty to protect its own population from grave and sustained violations of human rights, as well as from the consequences of humanitarian crises, whether natural or man-made,” the pope said. When “states are unable to guarantee such protection,” the international community should intervene, and such interventions “should never be interpreted as an unwarranted imposition or a limitation of sovereignty. On the contrary, it is indifference or failure to intervene that do the real damage,” the pope asserted.

The catastrophe in Myanmar appears to be a clear-cut example of a case in which the failures of a government unable or unwilling to protect its own population require action by the international community. The international community must first exhaust every possible nonmilitary option for a resolution of the crisis. The mediation of other Southeast Asian nations as well as of U.N. Secretary General Ban seems to offer an avenue for humanitarian rescue not available through direct negotiation with the West, which would still be the major source of aid. While slow, such mediation may satisfy the principle of proportionality. Although the human toll may still be high, it will be smaller than if there is resort to armed intervention. Yet with the monsoon season rapidly approaching, time is not on the side of the suffering people of Myanmar. If a limited armed intervention is needed, it should be a multilateral effort, and its principal purpose must be humanitarian. The scale, duration and intensity of the intervention must be no greater than what is required for the successful delivery and distribution of aid.

It is clear that the most appropriate body to authorize any such interventions is the United Nations, which makes all the more urgent the pope’s call to strengthen the U.N. system. Adequate funding of the organization, coupled with appropriate accountability, would be a good start. But the duty to protect requires the international community to rethink the very idea of security and to understand that preventing and alleviating humanitarian crises, primarily through nonmilitary means, is an absolute requirement for international peace in the 21st century. Effective future interventions, therefore, will require a reformed U.N. Security Council committed to incorporating duty to protect principles into its decision-making, as well as a standing international constabulary force that can effectively implement its resolutions and augment the organization’s beleaguered peacekeeping capacities.

Most important, the world’s moral commitment to fulfill its responsibility to protect will need to be strengthened. The international community’s embrace of this principle will require nation states to expend their treasure and even their blood on behalf of the world’s oppressed, and to confront the possibility that the moral imperative to act in the face of human suffering may override their provincial interests. As failed states multiply and complex humanitarian emergencies become more frequent, only more difficult choices lie ahead.

The Editors
Show Comments (
5
)
Comments are automatically closed two weeks after an article's initial publication. See our comments policy for more.
14 years 6 months ago
“If limited armed intervention is needed . . . its principal purpose must be humanitarian.” “Pope Benedict XVI argued that in such situations the international community has a moral obligation to intervene.” One would think a Jesuit publication could parse these concepts with some traditional Church thinking. Under what circumstances can and/or must a Christian intervene, with force if necessary? When my neighbor chases his teenager around the back yard with a baseball bat should I/must I intervene, at the risk of my ribs? Is there a Christian imperative to violence? When Pol Pot shoots people with soft hands . . .? When Saddam slaughters the Shia . . . ? How about the horrors of North Korea, well-known but hidden, if you know what I mean? Naw. Let’s leave the rules fuzzy, so that liberals can pick and choose the circumstances when our military must secure the peace, enforce order, and provide necessities. And let’s assign the duty to the United Nations, even though we all know they can’t enforce a parking regulation without American muscle. And even then, their bureaucracy will debate the matter and ultimately steal the fine money. Yes, there is a time to give war a chance. I don’t think the writer of this editorial, however, has a clue as to when.
Gabriel Chong
14 years 6 months ago
I believe, that the UN should consider putting the Junta on trial against humanity.
14 years 6 months ago
The high sounding call for the UN to reform itself, to become the moral decision maker and ultimate policeman to enforce by force, if necessary, "If a limited armed intervention is needed, it should be a multilateral effort, and its principal purpose must be humanitarian. The scale, duration and intensity of the intervention must be no greater than what is required for the successful delivery and distribution of aid," reflects a startling and basic divergence from Pope Benedict's XVI position wherein he stated "situations the international community has a moral obligation to intervene. “Every State has the primary duty to protect its own population from grave and sustained violations of human rights, as well as from the consequences of humanitarian crises, whether natural or man-made,”... "When “states are unable to guarantee such protection,” the international community should intervene, and such interventions “should never be interpreted as an unwarranted imposition or a limitation of sovereignty. On the contrary, it is indifference or failure to intervene that do the real damage,” the pope asserted." The editorial implies that armed intervention is warranted only to provide humanitarian aid while the Pope placed no such restriction in his call for international action in cases of "sustained violations of human rights" as well as in "humanitarian crises" which implies that regime change is a legitimate reason for action, including armed intervention. The Pope's stated position does not touch directly on the moral responsibility of individual nation states to act independently of the UN to relieve suffering due to violation of human rights or a humanitarian crisis in the absence of action by the international community approved by an unanimous vote of secular nation states. However, his final warning "it is indifference or failure to intervene that do the real damage,” can be interpreted as an extension of Thomas Aquinas's "just war' concept and in line with one of the many reasons, not simply WMDs, that supported President Bush's rational for replacing Saddam Hussein in Iraq. Is it the contention of the editors that an unanimous vote of the UN Security Council is the only means to impart justification to aid citizens of a nation state in "humanitarian crises" by all necessary means, including armed intervention, but there is no means to provide these same citizens relief for "sustained violations of human rights"? And what morally responsible actions by nation states, alone or cooperatively, do the editors support when the UN fails to act?
14 years 6 months ago
I am a retired member of the US Military. Send in the troops or not? You say yes then condemn that they were sent in when things work out differently than expected. You say no and not do any thing else. Why not fund an organization called Non-Violent Peaceforce so they are as large as our military machine and let them work out a peaceful solution. See www.nonviolentpeaceforce.org.
14 years 6 months ago
This is a nice idea, but it runs up against the same obstacle as do efforts by the Security Council to isolate Sudan diplomatically -- China, which supports the Burmese junta to such an extent that all our sanctions and pressure come to naught. A military intervention would almost certainly be regarded by China as a grave threat and provocation. They might even consider it as a matter worth going to war over by committing Chinese troops. And the PRC has a veto in the Security Council. The Myanmar generals have us over a barrel because they have China on their side.