A Church to Hope In: What should distinguish the future church?

A Church to Hope In: What should distinguish the future church? 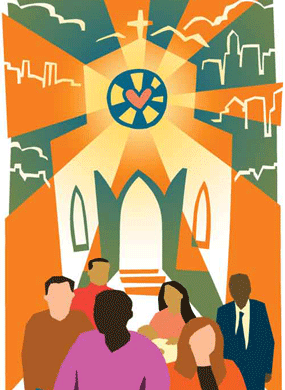 In his second encyclical letter, Pope Benedict XVI affirms the centrality of hope as a Christian virtue, one that carries those imbued with it to the doorway of salvation. The Christian’s ultimate hope is in Christ the savior. Here and now we carry hope also for the church, Christ’s body, in days to come. What might the church look like, feel like, live like in a future worth hoping for? I propose seven hopes for the future church.

A Church of In-spirited Structures

Church structures are in-spirited, vessels of the divine Spirit, able to inspire believers and potential believers with the living presence of Jesus Christ. In the church of the future, ecclesial structures will be living, open channels of effective, transforming communication. The sacramental principle that is the foundation for such a claim is one of Catholicism’s richest contributions to the Christian tradition: the assumption that created things can carry within and communicate without the transforming presence of God. It is the principle embodied in the seven sacraments, in the church itself as the presence of Christ in the world and in Jesus Christ recognized as the visible presence of God’s unending love of the universe. One of its implications is that the institutional realities that render the church visible and effective in the world are capable of being vehicles of grace, lifting up and celebrating the light of the Spirit within the community.

A Church of Porous Borders

The church of the future should be a church of porous borders. Its frontier will be less a wall and more an area of give and take. We can learn from the borders within living organisms, in our own bodies. Individual cells have their perimeters, their margins, a point at which they are in contact with the next cell. But the very life of the individual cell, and ultimately of the organ and organism of which it forms a part, depends on the fact that the borders of living cells are porous. They live because their margins are permeable. They allow organized exchange. Nutrients enter. Waste products exit. Electronic impulses are passed from one nerve cell to the next, and the next. Their borders are designed for communication, and the communication itself—built into their very structure—is vital to life and growth and strength.

The church of the future will be recognized by its distinctive frontier; but that frontier will be a porous border, because it will be a line of living communication with other Christian churches, with other faiths and with nonbelievers. The church does not need a wall as a border to prevent aliens from entry. If the church of Christ understands itself as grounded in the Scriptures and the ministry of Jesus, there are no aliens. There is no one to fear.

A Church of Servants

In Ephesians, Paul teaches that there are in the church apostles, teachers, prophets and more, each undertaking his or her proper role. But whatever the individual Christian’s distinctive role, all Christians have in common the call to serve. We are called by God to serve one another in the church, and the church as a body is called to serve the world. Every call in the church, even the call to hierarchical leadership, is a call to service. This is the defining mark of the community that bears Christ’s name. It is a community of loving servants, each one seeking not the good of self, but first the good of the other.

A church of servant-leadership embodies two critical truths. The servant stands in contrast to a world in which authority is seen primarily as power over a subordinate. And the servant exemplifies how to live well and effectively, able to accomplish in the present something that will last in the future, by living as a servant of all, beginning with the most powerless. This way of service must characterize the church of the future, a church in which to hope. This is the fundamental identity of the whole body of Christ and all of its members.

The church of the future ultimately seeks invisibility in the sense that it will always strive toward transparency. We look toward the church, yes, but only so that we may see the face of Christ. We hear what the church says, yes, because we hear in its voice only the voice of Jesus. Whatever is a barrier to that transparency—property, modes of dress, ways of acting that may bear the imprimatur of centuries of usage or new ways that may be suggested to respond to new needs—each will be examined in the light of a single question: Does this help to make clear and accessible to the world the message and the life of Jesus? There may never be unanimity in the church over the response to that question on a particular issue, but the very fact that the question is posed in all honesty will assure the church that it does not seek its own glory but seeks to fulfill the mission of Jesus.

The future church will be distinguished by its consistent gentleness toward each person. The value of each person is founded in the individual’s identity as a creature of God, brought into being as a unique person by the will of God, destined for salvation in the house of God. The community of the church values each and every person, particularly those who are least able to assert their own worth. Thus the poor, the lonely, the helpless, the distressed, the homeless, the broken-in-spirit, the children, the unborn, the domestically abused women, the victims of violence and of war (of whatever people or faith)—all of these are the concern of the church community as a whole and of each individual believer. The resources of church life—spiritual and material—are placed at the service of these brothers and sisters. How else could they ever know that they are our brothers and sisters?

The church must be the place where gentle regard for each person is the universal and unbreakable rule. This will be possible only in the measure that the church is true to its own understanding of the inner life of God. Each person of the Trinity is uniquely held, and their unity provides the very ground of all that is. The God we worship is a community of mutually indwelling love. The inner life of God, though only glimpsed through faith, is the everlasting model of what the church is called to be: a community of persons of equal dignity, of equal worth, all with their own proper work complementary to that of the others, united in the perfection of love.

A Church That Looks Outward

We must understand “church” as a verb. It denotes an action, an ongoing activity. The church, rather than having a mission, is a mission. Defined by the action of Jesus Christ in the world, the church’s orientation is not toward itself, toward its own constitution or the protection of its own assets. The church’s movement is ad extra—that is, directed outward toward all those others, who, unlike the members of the church, have not heard a saving word, who stand in terrible need or terrifying fear, whose experience of the church in the past may have left scars.

The church of Christ is oriented in three fundamental directions, and each one commands the community’s attention. First, the church is oriented toward the world. The Second Vatican Council’s “Pastoral Constitution on the Church in the Modern World” insists from its opening words that the church must be concerned about the cares of the world and labor to bring healing to its deep and pervasive wounds. The council asserts as foundational that we, as the church, have been entrusted with the assurance of divine love and that this gift is not only for ourselves, but for us to share generously with all on the planet. This is as fundamentally true as is the statement that Jesus did not rise from the dead to new and lasting life for his own sake. He rose so that we all could share in that rising and in that new life.

Second, the church is oriented toward the kingdom. The church does not live to build up a kingdom of its own, no more than we as individual believers live for our own sake. The church lives as an instrument in the hand of God for the establishment of God’s kingdom. Jesus Christ preaches not himself, but the kingdom of God. The community gathered in the name of Jesus preaches Christ. But the message of Jesus in the Gospels is: “The kingdom of God is among you!” To carry this message requires the community of faith to assess all that we do in the light of that proclamation. Does this undertaking—this commitment of resources, this new project, this renewal of an aspect of the tradition—proclaim the truth that this world, wounded by sin, has been saved, and is destined for greatness? Even to pose this question is to recognize that we as the church do not belong to ourselves; we belong among those who yearn for the fulfillment of God’s reign over all.

Third, the church of the future is oriented from the southern hemisphere. The growing edge of Christianity in Africa and South America challenges the church in Europe and North America: Do not give us money alone, as if solidarity in money would fill up what we owe to one another. Rather, listen together with us to what the Gospel of Jesus says to our present circumstances and to our hopes and possibilities for the future. Act together with us to strengthen and expand the community of believers throughout the world.

This orientation of a church “that looks outward” highlights the problem when the church is primarily concerned with itself, consuming energy either in agonizing over the state of affairs inside the church or looking fearfully at supposed enemies “outside.” When it is necessary for the church to concentrate on putting its own house in order, something is wrong in the house. The commitment of energy to inward problem-solving must be made as swiftly and effectively as possible. Why? Because it is in turning attention outward again that the church lives and grows in communion with its founder and guide.

The future church is a church of joy. It does not ignore humanity’s pain. But it is a community marked by absolute trust in the presence and faithfulness of God. This church—even when it knows itself to be sharing the darkness of the tomb with a war-weary and wounded humanity— affirms the Resurrection and manifests its joy. The church is eschatological by nature, straining forward with confidence.

These seven hopes for the future church are but an opening, an initiation. Developing this opening and deepening this initiation is the continuing work of all who are and will be the church.