A New Roman Missal: What to expect from a new translation of liturgical texts 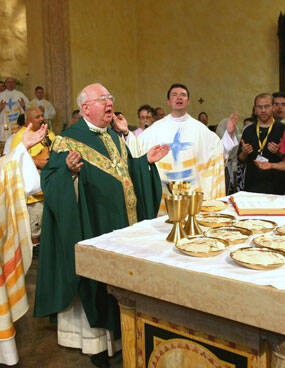 Catholics expect some changes to the words in the liturgy from time to time. But they will soon be using the first Mass texts since the Second Vatican Council that have been created according to a different theory of translation. The revision will have a noticeable effect on the style and sound of the texts of the Mass. Some Catholics are looking forward to these changes with hungry anticipation; others are hoping that the laborious process of translation and approval will drag on and never produce a result. Still others, including many priests, are blithely unaware of the changes to come.

The current Sacramentary is an English translation of the second Latin edition of a book entitled Missale Romanum. The third Latin edition was promulgated in 2002; its translation into vernacular languages is in progress. Many of the changes made will slip beneath the radar: new vigil Masses for the Epiphany and the Ascension, some new votive Masses, a rearrangement of the Masses for various needs and occasions, and the addition of several saints’ days on the universal calendar, to name but a few. The most notable changes are a consequence of the Vatican’s decision to apply a different theory of translation in preparing the text. So even though the Latin words have not much changed from the second to the third edition, the English words have. It will sound like a very different book, starting with the title: instead of calling it the Sacramentary, we will be praying from the Roman Missal.

Some Catholics are wary of the new translation because other recent changes to the Mass have been controversial, from the restriction of duties for extraordinary ministers of holy Communion to the revised translation of the lectionary. Those who worked on the first English translation of the Sacramentary 40 years ago now find their contributions criticized, often unfairly.

The new translation will affect the people in the nave, not just the ministers in the sanctuary. Everyone will notice alterations to the texts they say and hear. A church that has been praying the same English words for four decades may rightly wonder whether the revisions will improve its common prayer. Surely that is the intent of the new translation. Still, any new translation represents a change, and change is always difficult.

While this article quotes several draft texts of the revised missal, none of these has reached its final form, although a revised Glory to God and Holy Holy have been approved for limited use at World Youth Day this summer in Sydney, Australia. All the proposed texts are subject to final approval from the Congregation for Divine Worship and the Sacraments. That approval will probably come at the end of the entire project—not piecemeal—so that the missal may be reviewed as a complete unit.

Catholics will immediately notice changes to some of the most common texts of the Mass (see here for a few examples). What people hear—not just what they say—will also change. New translations have been proposed for all the presidential prayers, including the eucharistic prayers. The grammar will be more complex, the word order more varied and the vocabulary more expansive.

The draft of the opening paper, or collect, for the First Sunday of Advent, for example, reads, “Grant, we pray, almighty God, that your faithful may resolve to run forth with righteous deeds, to meet your Christ who is coming, so that gathered at his right hand they may be worthy to possess the heavenly kingdom.” The sentence is longer than we are accustomed to hearing in English, but it is the same length as the one currently in use for this prayer in French, Italian and Spanish.

The proposed collect for the Fourth Sunday of Advent is similarly complex, but it already enjoys popularity as the concluding prayer of the Angelus: “Pour forth, we beseech you, O Lord, your grace into our hearts, that we to whom the incarnation of Christ your Son was made known by the message of an Angel may by his Passion and Cross be brought to the glory of the resurrection.”

The elevated style of these prayers will surely cause an adjustment in the way the priest speaks them and in the way the people hear them. Some fear that the prayers of the Mass that are already hard to comprehend will become even more remote. Others think that the richness of the vocabulary and style in the proposed translations will stand up to repetition, study and prayerful reflection.

The new translation strives throughout for texts that can be proclaimed in an understandable way. That is not always easy to accomplish. Some of the longer orations are being broken up into independent parts, and some words are being reworked to facilitate understanding. For example, an early draft of the collect for the Feast of the Visitation began this way: “Almighty, everlasting God, who inspired the Virgin Mary to visit Elizabeth while bearing your Son in her womb....” It was not clear here whose womb was carrying the Son of God. A later revision proposes: “Almighty, everlasting God, while the Blessed Virgin Mary was carrying your Son in her womb, you inspired her to visit Elizabeth....”

Many of the texts will be sung, so their cadence and rhythm have received extra attention. The conclusions to the prefaces, for example, are drafted in a way that draws the text to a strong close and signals the start of the Holy Holy. Two examples are “forever crying out to your glory,” and “we sing the hymn of your praise and acclaim without end.” Phrases such as these are designed to produce a good sound when sung.

The use or avoidance of inclusive language can have a serious effect on the ability of some worshipers to pray. It can be argued that the Sacramentary brought these issues to the fore; before the vernacular translations, inclusive language was not much debated. But once the Sacramentary was published, people began reacting to its choice of words. The 1974 version of the words of consecration, for example, included the phrase “for you and for all men.” By 1985 the word “men” was dropped.

Almost all the current opening prayers address God as Father. Decades ago, this was thought to be a warmer word than “God,” which would have been a more literal choice for the Latin word “Deus” that begins these prayers. “Father” is more familial, but it also carries gender-specific freight. The new translation consistently uses “God” in these instances, a form of address that many worshipers will find more appealing. Almost universally throughout the draft of the missal, “brothers” now appears as “brothers and sisters,” and such words as “man” have been recast as “humanity,” “people” or “men and women.”

The pronouns referring to God remain masculine. And sometimes the draft leaves the word “man” in place, largely because it was difficult for the translators to find a different solution, even after having discussed several alternatives. Still, those concerned about inclusive language will discover many improvements designed to ease their entrance into the spirit of prayer.

Some significant changes will probably never be evident to worshipers. For example, an early draft of the collect for the Mass for persecuted Christians prayed to God for those “who suffer because of your name.” The word “persecution,” which appears clearly in Latin, was missing from the draft after the word “suffer,” making the prayer sound tepid. Since the persecution of Christians continues in many parts of the world today, religious persecution demands the prayerful attention of the church. The word “persecution” was restored to make the intent of the prayer more explicit. Probably no one will notice the refinement, but the very unobtrusiveness of the phrase signals its success as a translation.

Beyond the issues of translation, the third edition of the missal will include some editorial improvements that should make a difference in how the Mass sounds. The presider’s texts will be divided with greater attention to sense lines and page turns. The Eucharistic Prayer for Masses for Various Needs and Occasions, currently available only in a volume separate from the Sacramentary, will appear between the same two covers as all the other eucharistic prayers. Such accessibility should increase its usage. Single-use prefaces will appear on the same page as other presidential prayers for the feast in question. These small editorial matters will enhance the smooth celebration of the Mass.

The date for the release of the missal is still unknown. Over the next few months the work will pass from the International Commission on English in the Liturgy to the various English-language episcopal conferences, who will vote on it section by section. The Congregation for Divine Worship and the Sacraments will give its approval, which it prepares in consultation with the Vox Clara commission. Pope Benedict will be involved, because the draft calls for changes to the formula of consecration: “Take this, all of you, and eat of it, for this is my Body,” “the Blood of the new and eternal covenant; it will be poured out for you and for many.” The best guesses now put the publication date at 2010 or 2011.

The new translation will have a new style and will put different words into the mouths of both worshipers and ministers. The process of changing will be difficult for many Catholics. The hope is that it will be worth the effort. The missal will attempt to do better what no translation can do adequately: give us words to praise our God.