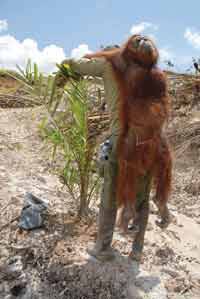 Sewing up the torn paw of a Javanese leaf-monkey, with the help of an Indonesian vet, might seem an untried and unexpected form of interfaith dialogue, but it proved very productive for me. This particular encounter took place in a wildlife rescue center, ProFauna Indonesia, in the hill country of East Java, where I recently served as a volunteer.

Rosek Nursahid, an Indonesian Muslim biologist and the founder of ProFauna, established the nongovernmental organization in 1994 to counter the illegal trafficking in wildlife that has increased as the logging industry reduces the available woodland habitat in Java, Sumatra, Kalimantan (Indonesian Borneo) and West Papua (the Indonesian part of New Guinea). The rate of deforestation in Indonesia has accelerated as foreign markets for wood products have expanded, including China’s demand for construction materials to prepare for the 2008 Beijing Olympics.

Many people are aware of illegal logging in Indonesia, but few have heard about the consequent damage suffered by local wildlife. From Indonesia’s vast forests, poachers—who find their access facilitated by roads carved through the jungle by the bulldozers of logging corporations—net thousands of members of endangered animal species, from pangolins to orangutans. Some of these captive animals are sold as pets to Indonesian households. Others are trafficked all over the world. Under Rosek Nursahid’s leadership, ProFauna has fought to stop the trade.

Nursahid’s approach is twofold: activism (rescuing animals, spurring the government to enact and enforce Indonesian environmental laws and—when necessary—confronting animal traffickers) and education (holding classes and workshops at the camp for students, teachers, government officials and other members of the Indonesian public). He considers particularly important the ecology camps ProFauna runs for Indonesian children. “By educating them in environmental awareness and respect for animals,” he told me, “we are investing in the next generation.”

As a volunteer, I was integrated into a daily round of chores linked to the care and rehabilitation of the animals at the ProFauna center: preparing food, cleaning out cages and habitats and dealing directly with the animals inside their habitats. Aside from learning in this immediate and direct way what ProFauna does to help rehabilitate animals and prepare them for re-entry into the wild, I benefited from the opportunity to interact with dozens of ProFauna staff members of diverse backgrounds. I learned from Muslims, Hindus and Christians what it means to be a person of faith who is also committed to environmental custodianship. And as the only foreigner and the only American in the camp, I drew plenty of attention and had my share of questions to answer.

One of the most emotionally challenging tasks involved visits to pasar burung (bird markets, where in fact all kinds of animals are sold) in Denpasar and the port of Surabaya. In these cities, as elsewhere throughout the Indonesian archipelago, traffickers sell members of protected species to the highest bidder. Working with ProFauna members who wished to expose such dealers, I presented myself as a foreign buyer.

It helps to have a strong stomach in such markets. Thousands of animals are crammed into cages in hot airless sheds. One enclosure held sparrows that had been spray-painted with metallic hard-gloss purples and reds—“to draw customers,” I was told. Another enclosure held a magnificent serpent-eagle confined to a cage so small it could neither stand nor flex its wings. A dealer amused himself by trying to force a banana down its throat. The bird refused with a fierce, unyielding toss of its head.

Nearby, a dozen monkeys—each chained by the neck—watched as wepassed. Their eyes commanded attention: plain to see were all-too-recognizable emotions—dejection, anger, despair. “Mereka sesungguhnya menderita,” said the ProFauna staffer at my side, “They really do suffer.”

This experience stayed with me as I sorted my notes for a lecture back at the ProFauna rescue center. Rosek had arranged for me to lead a workshop and discussion on perspectives offered by world religions on wildlife and environmental issues. ProFauna staff and officials from the Indonesian Department of Forestry attended and members of the local Muslim, Hindu, Buddhist and Christian communities were invited to participate.

Representatives of each community responded to the points I presented; then we engaged in a general discussion on how each faith can contribute insights to environmental issues. Among the topics we discussed was the morally problematic sense of overlordship and entitlement that Christians and Muslims have often derived from the reading of their scriptures. A point of agreement among all those present was the need for religious educators to emphasize humanity’s responsibility for environmental stewardship.

I noted that in recent years some Muslim writers, notably the Iranian scholar Kaveh Afrasiabi and the Malaysian human rights activist Farish Ahmad Noor, have urged members of their faith to embrace environmentalism as both a global and an Islamic issue that should concern Muslims. Noor acknowledges that many Muslim thinkers have been preoccupied by an agenda of collective identity and a defensive mentality; these have precluded interfaith cooperation on global crises. Too often Muslim scholars—like some of their Abrahamic kin in the Christian community—have regarded the environment in terms of a simplistic formula: that submission to God entitles the faithful to exploitative mastery over the earth. Taken to its extreme, such triumphalism results in an adversarial and manipulative attitude toward nature.

Though often overlooked, there are resources within the Islamic tradition for countering such trends, especially in Sufism, the Islamic mystical tradition. The contemporary Iranian-American scholar Seyyed Hossein Nasr argues that “Nature in Islamic spirituality is…not the adversary but the friend of the traveler upon the spiritual path.” He sees in nature an invitation to meditate and behold the “signs of Allah” in the created world. Nasr uses this as a basis for proposing an Islamic theology of environmental stewardship. His imagery of the spiritual traveler fits well with the longstanding Christian conception of humans as pilgrims, who should take a contemplative rather than exploitative approach to the world through which they sojourn.

I pointed out some other issues on which Christian and other faiths diverge. I discussed Abraham Joshua Heschel’s Jewish theology of the “divine pathos” and how the shekhina (God’s presence, manifested among us on earth) voluntarily experienced exodus and exile along with the Israelites. Jürgen Moltmann Christianized this theology using the concept of a “crucified God.” Moltmann’s theology emphasizes the divine quality of empathetic suffering, a suffering entered into freely by a God who desires ardently to experience a loving solidarity with the world he brought into being.

Heschel and Moltmann’s thought has been applied in recent years to environmental concerns. The theologian Mark Wallace argues that just as Christ’s crucifixion constituted a “terrifying event of loss and suffering within the inner life of God-self,” so too does God continue today to suffer in the Trinitarian person of the Holy Spirit. “The Spirit is Christlike or cruciform,” says Wallace, “because she suffers the same violent fate as did Jesus—but now a suffering not confined to the one-time event of the cross, insofar as the Spirit experiences daily the continual degradation of the earth and its inhabitants.”

The Javanese Buddhists in my audience had no problem with any of these ways of thinking. They responded with tales from the Jatakas (stories of the Buddha’s earlier incarnations): how a prince was so moved with pity for a starving tigress and its cubs that he offered his own body as food; how the Buddha in various cycles of existence took the form of wild animals who sacrificed their lives to ease the suffering of others.

Some Muslims at the workshop expressed discomfort with the notion of divine vulnerability. After all, the Koran characterizes Allah as “the Mighty,” “the Conqueror” and “He who is free from any wants or needs”—names that are far from Christian incarnational notions of a wounded Spirit or crucified God.

We overcame our theological differences in our shared work at the camp, with the forest animals that had been rescued from the poachers and smugglers’ markets. For several days I helped Dr. Wulan, a skilled veterinarian and a devout Muslim, who always wore her hair carefully covered in a head scarf as she worked in the infirmary. One day we treated a Sumatran gibbon whose skin was infested with parasites; the next we sutured a leaf-monkey’s torn foot. (Within 48 hours the sutures tore open, forcing us to stitch the wound again, so this was one monkey’s paw with which I became well acquainted.)

I was impressed by the care Dr. Wulan took in reassuring these creatures, stroking their fur, talking to them gently and doing what she could to ease their readily evident fear. Her actions reminded me of hadiths (sayings attributed to Muhammad) in which the prophet of Islam encouraged Muslims to lessen the suffering of animals.

Allah, after all, is also known as compassionate and merciful. These are attributes of God on which both Muslims and Christians can agree.

View a slideshow of ProFaunas work with animals in distress.

David PinaultDavid Pinault is an associate professor of religious studies at Santa Clara University and a member of ProFauna Indonesias advisory board. He is also the author of Notes From the Fortune-Telling Parrot: Islam and the Struggle for Religious Plura
Show Comments (
2
)
Comments are automatically closed two weeks after an article's initial publication. See our comments policy for more.
13 years 7 months ago
I’m not a religious person myself, but I was touched by this thoughtful and positive article. It would be wonderful if more people could foster such cooperation and harmony between our many cultural and religious groups, and consideration for our environment and other species. What a better world it would be for all of us and the other lifeforms that share the earth with us.
13 years 6 months ago
What a touching and hopeful message. Please accept the compliments and thanks of Quaker Concern for Animals in Britain.