Getting Away From the Kids: The spiritual rewards of business travel

Getting Away From the Kids: The spiritual rewards of business travel 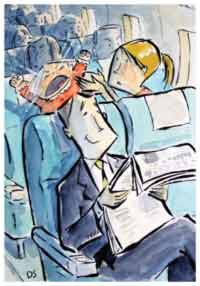 Just before I left North Carolina for a 10-day business trip to Southeast Asia, a well-meaning friend said to me with great sympathy, Of course, itll be really hard to be away from the kids.

I paused and pictured my three-year-old son howling in rage because I flushed a toilet in our house without his permission. I recalled smashing my forehead against a half-opened door and reeling backward, Three Stooges style, as I staggered through the midnight darkness to check on my fussing infant daughter.

Yes, I said, dreaming all the while of the next flight to Hong Kong. Itll be awful. There was a time when 15 straight hours in an airplane would not have struck me as an opportunity for spiritual renewal. But that was before I became a father.

In the Gospel of Mark, Jesus chastised his disciples for trying to prevent children from approaching him. Let the children come to me; do not hinder them; for to such belongs the kingdom of God, he said. It is quite possible Jesus regretted his magnanimity as the kids drew closer, sneezing in his eyes and shouting the same questions at him 10 or 15 times. He might even have asked, echoing the narrator of Donald Barthelmes classic short story Critique de la Vie Quotidienne: Is there to be no end to this family life?

I dont often voice these feelings aloud, because they are not socially acceptable in 2008. You might even be thinking right now: Whats wrong with this guy? His kids should be the center of his universe.

Well, something is wrong. But Im pretty sure its not with me.

Much has been written about todays generation of helicopter parents, who hover constantly over their children, tracking their every move, swooping in at the slightest hint of trouble. This is not good for the kids, of course, who never learn to do anything for themselves, and psychologists are having a grand time dissecting the implications. I have seen considerably less discussion, however, of the price parents themselves pay for relentlessly putting their children front and center.

I think there is, among other things, a steep spiritual cost, and we can run up a hefty tab before we know it.

At a weekend retreat my wife and I made before our wedding, our group leader proposed something fairly radical for our times: placing your children first is not necessarily the right formula for a healthy marriage. It is more important to take care of your spouse and yourself so you can be the kind of well-balanced adults your kids need you to be.

Or, to put it less elegantly, sometimes you just need to get away. For my wife, the occasional weekend getaway with her sister does the trick. In my case, business trips offer the best opportunity. For several years now, I have traveled annually to Singapore. Its a rather exhausting journey of about 30 hours. The 12-hour time difference between there and home is punishing, as is the daily routine of predawn e-mail checks, epic meetings and late-night business dinners. The jet lag doesnt even really set in until I have made the long trip home. And, by the way, my supremely extroverted boss is right there with mean extreme introvertthe entire time. Still, I have come to enjoy this marathon thoroughly for a few simple reasons, mainly those precious moments when I can linger in a hot shower or read a newspaper in silence or hear a waiter ask, How can I serve you?

Ill confess to having wondered if I should really relish these trips quite so much, because I do love my family. Getting married and having kids are two of the best things that ever happened to me, maybe the only things that could have jolted me out of the navel-gazing of my 20s. Being a family man is a vocation, and my life changed radically for the better when I found it. But even the things you love can drive you batty. So I looked to the Gospels for guidance.

Jesus and his disciples spend a fair amount of time tryingusually fruitlesslyto escape the crowds and constant demands that follow them everywhere. Mark paints the reality of their lives this way: For many were coming and going, and they had no leisure even to eat. This sounds like a standard Wednesday evening in my house, with meatloaf consumed standing up, pureed green beans dripping down the high chair and nonstop negotiations with my son over whether he deserves a popsicle. Jesus mission was to minister to the crowds, but he and his disciples needed solitude and deep prayer to renew themselves. His solution for the chaos: Come away by yourselves to a lonely place, and rest a while.

The Gospels document many examples of Jesus retreating from the constant clamor around him, stealing away from the adoring crowds, the hateful Pharisees and his earnest, bumbling apostles. In Mark, for instance, we find him traveling to the sea, disappearing into the hills, moving from village to village and house to house in secrecy. He yearns for lonely places and finds rest there. He is searching, it seems, for the right balance between his frantically busy outward life and his intensely focused inner life. Jesus knew that his public lifethe family of faith he was so painstakingly buildingwas an ultimate measure of his success. Still, the crowds tried his patience, the apostles baffled him, enemies exhausted him. He needed time apart from them all, time for prayer, which made him better able to serve them. It never meant he took them for granted.

Recently, I made a short trip to New York City. Before we even took off, there was trouble. LaGuardia was delaying all inbound flights, the captain explained to my groaning fellow travelers. That was about the same time the 3-year-old girl directly behind me started shrieking and whining about getting to her grandmothers house. All around me, middle-aged men clutched their heads. We sat on the runway for an hour, serenaded periodically by her screams. That must have been painful, a colleague said to me later. But the truth is I barely heard her at all. The adjoining seat was open so I stretched out and relaxed. Why not? It wasnt my kid. And within a few hours I would be strolling down Fifth Avenue, engulfed by people but blissfully alone. City streets have a way of conjuring up my sincerest prayers, and the words on my lips would be: Lord, bring me safely back home to my familybut not yet.

Show Comments (
4
)
Comments are automatically closed two weeks after an article's initial publication. See our comments policy for more.
ANN ODONOGHUE
12 years 6 months ago
"Lord, bring me safely back home to my family—but not yet." Well, it happened. I am speechless.
Anna Seidler
12 years 5 months ago
Thanks for the timely, thougtful article about the need to get away from the children from time to time. The writer found respite in the long flights to the Orient, flights which he had initially dreaded. And his wife had retreats with her friends to renew her energy which is depleted from the demands of young children. I think this article will find approval from many parents of very young children. It is written with humor and love. Anna M. Seidler...
Tim Reidy
12 years 5 months ago
This is a test....
KATE CAMPION
12 years 5 months ago
I enjoyed Stephen's honest admission that he can best love his family with a little distance. I too would relish some "time off for good behavior." My sister, the public defender, reminds me however, that "time off for good behavior" means a reduced sentence, not respite. So, how does one who cares for her children at home and then others' children at school and then at home again (or in the car driving to enriching events for said children), and then makes dinner and then collapses, love as from a spring bubbling forth generosity? Oops, I'm whining. Reduced sentences aren't attractive (I'd like to live this life sentence out) and respite non-existent. Finding the "escape" in the moment is what eludes but beckons. Come Lord Jesus.
Advertisement

This article also appeared in print, under the headline “Getting Away From the Kids,” in the February 25, 2008, issue.