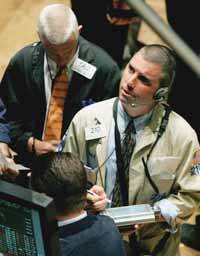 What a difference a few months make. Early last summer, knowledgeable observers were saying that we live in a new gilded age. The compensation of top business leaders had reached astronomical levels, with C.E.O.s being paid on average almost 400 times what the typical worker earns. And that did not even count what some business officials had been stealing from their shareholders in a string of scandals. Even the Enron-scale corruption of the post-bubble period was being eclipsed by the latest trend in corporate kleptomania, options back-dating.

Officers of more than 150 public companies have been under investigation for manipulating the prices of their stock so that they could grab illegally even more of their firms gains. Meanwhile, private equity kingpins have been buying and chopping up companies. The annual compensation of three hedge fund managers reportedly topped $1 billion; one of them boasted of eating $400 worth of crabs for lunch. All this took place while the middle class was being restructured into oblivion and retirees were watching their pensions vanish.

Now, however, it has become apparent how perilous all this newfound wealth is. An inflated housing market has come crashing down, along with the fortunes of all kinds of investors who were hooked into its unstable values. Hedge fund investors have discovered that some of their holdings were backed by subprime mortgages, and the ensuing insecurity has depressed the once-booming stock market. The credit markets have suddenly become unpredictable, causing corporate shake-ups to be put on hold. Anxious investors look to the Federal Reserve and find temporary reassurance.

Any reassessment, though, of the wobbly and uneven prosperity of recent times must take into account its political underpinnings. The masters of the universe in the new golden age of greed were aided and abetted by the only tangible achievements of the Bush administration: its tax reductions and deregulatory schemes. Every profile of contemporary American Catholics must come to grips with the uncomfortable fact that a majority of the Catholics who attend church every week voted for George W. Bush in 2004.

Maybe pragmatic considerations were uppermost in their minds at the time. American Catholics have been doing fairly well in the recent economy, at least according to a study by Lisa Keister, a professor at Duke University, who was cited in a New York Times column on May 25 by David Brooks. Their forebears may have been digging canals and working in domestic service in the late 19th century when the tycoons of that gilded era were amassing their fortunes. Now, however, most descendants of such Catholic immigrants have an education to add to a work ethic they inherited from their grandparents. According to Brooks, they have become full partners in Americas prosperity.

But have Catholics really been cashing in? Lawrence H. Summers, a former president of Harvard University, famously noted that Catholics are still underrepresented in the most lucrative profession of the new economic era: investment banking. With a touch of irony, one might say that for all their financial success, members of the faith are still not fully participating in the social injustices of our time. Perhaps such inhibited behavior results from a fear of achieving more than their tradition would consider acceptable. But maybe such scruples are also owing to something more significant: a recollection of the seemingly quaint notion that gaining the world can sometimes cost you your soul.

Yet a larger question remains for American Catholics who are serious about the social implications of their faith: Can they be a positive force to confront the gross economic inequities of our time? For a while, things did not look good, but that trend appears to have stalled; in general Catholics voted for more politically progressive candidates in last years congressional elections.

There are other hopeful signs that U.S. Catholics are ready to take a more active role against income inequality. Pope Benedict XVI, no radical on many matters, has spoken of capitalism as an ideological promise that has proven false. Catholics, after all, are the heirs of both the Hebrew prophets who railed against economic oppression and the early followers of Jesus, who held all things in common.

Perhaps no saint better encapsulated the message of equality and human dignity at the heart of the Gospels than did Vincent de Paul, who said we must ask forgiveness from the poor for the charity we give them. If our country is ready to enact social policies to curb the shameful excesses of our new gilded age and better distribute the abundant wealth of our society, Catholics ought to be front and center in that movement.