Waiting for Good News: A lawyer hopes for an end to capital punishment. 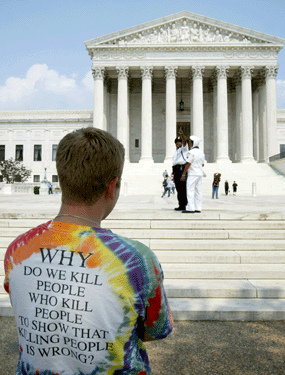 Crammed in somewhere among the pre-school Christmas show of my two youngest daughters, the elementary school holiday concert of my second grader and an ongoing murder trial, I visited with my condemned client, John Booth-El, a few days before Christmas last year. I have been to the Maryland Correctional Adjustment Center, or Supermax Prison as it is called, in downtown Baltimore many times to discuss various facets of Johns case. He has been on death row for 23 years, and I have represented him for the last seven. This visit came amid a changing political landscape for the death penalty in Maryland and across the nation, encouraging hope for its abolition. Our conversation too was encouraging, optimistic and fittingly adventful for the season.

In mid-December 2006, the state of Florida executed Angel Diaz by lethal injection. The killing took 34 minutes according to the Florida medical examiner. The needles, as explained by the examiner, were inserted in and through Diazs veins, causing the poisonous chemicals to be pumped directly into Diazs flesh. This prolonged the killing process. Witnesses to the execution reported Diaz licking his lips, grimacing and appearing to try to speak 24 minutes into the execution. A second lethal dose of poison was necessary to kill Mr. Diaz, who clearly suffered both unnecessary and severe pain. Governor Jeb Bush immediately called for a suspension of all executions in his state, a promise that the new governor, Charlie Christ, also pledged to honor.

That same week, a federal judge in California banned the current use of lethal injection in his state as unacceptably cruel and unusual. The judges order did not preclude a change in the execution protocol by Governor Schwarzenegger to make Californias procedure constitutional. It did recognize the inhumanity of the present execution process and again raised questions about the legitimacy of capital punishment in principle.

Similarly, the Maryland Court of Appeals, the highest court in the state, struck down the present lethal injection protocol in Maryland as illegal. The lethal injection process in place was never submitted to the appropriate committee in the state legislative body for review or debated at a public hearing, as is mandated. The Maryland prison system ignored public and legislative review of the process as required by the law. As a result Maryland, too, has suspended use of its capital punishment machinery, and my client is for the moment spared.

Rethinking Why a State Kills

What does all this mean? Only that we need to refine our death penalty procedures? Lethal injection is the preferred method of execution, used in 37 states, and is judged superior to hanging, the firing squad and use of the gas chamber. But its continued use has been challenged all over the country. Is the issue simply the need for a more efficient way for the state to kill?

Take Maryland for example. In 1988, the Supreme Court struck down Marylands entire capital punishment decision-making process because individual jurors were not given the appropriate opportunity to consider all arguments against the death penalty. In 1993 Kirk Bloodsworth, wrongly convicted of murder and sentenced to die, was exonerated and released. After his nine years of incarceration, DNA evidence conclusively showed that he was innocent.

In 2002, Gov. Parris Glendening of Maryland declared a moratorium on the death penalty because of concerns of racial bias in the use of capital punishment. The state undertook an extensive empirical study of the history of capital punishment in the state. The study concluded that the race of the murder victim was an important factor in determining who was to be executed. When Caucasians were the victims, the defendant was far more likely to be condemned to death than when African-Americans were the murder victims.

None of these practical inequities is unique to the State of Maryland. All of them recur across the country. While proponents of capital punishment claim these problems can be solved, they are in fact symptoms of a much deeper societal sickness, the belief that killing solves problems. We need to confront this sickness. Placing people, poor people at that, on a gurney and pouring poison through their blood cannot be made legitimate.

The debate on lethal injection as the means of capital punishment should be seen as inextricably related to the purposes of capital punishment. Will lethal injection be rejected as a method of execution? I do not know. I know my clients life is currently safe from the governments reach. I know we will debate this issue in Maryland and across the country in the year ahead. I know there is some hope.

So even though Christmas 2006 is long past, for me Advent continues. Maybe at the right moment, when leadership is most needed, shepherds like those described in Lukes infancy narrative will emerge to announce the good news. Lord knows, the abolition of the death penalty in the United States is good news long overdue.