Hanukkah and the Miracle of Self-Renewal 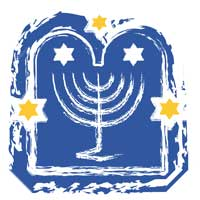 They start arriving in August: the interminable parade of catalogues hawking tantalizing Christmas wares. Before I have finished writing my High Holy Day sermons, before the start of school, long before the leaves have turned, before anyone has given the remotest thought to getting bags of candy for the neighborhood childrens trick or treat, my mailbox begins to flood with the glossy spreads about tree decorations, gift stockings and this years must-have accessory to enhance the family celebration. More than a few of these catalogues now devote space to accommodate those of us who light a menorah (a nine-branched candelabra) and spin a dreidel (a four-sided top), inspiring many to imagine that its all the same thing, Hanukkah and Christmas, just dressed up differently. On this page of a catalogue Mickey Mouse is a Christmas ornament; on the next he is part of a Hanukkah menorah. Such images reinforce a popular misperception of Hanukkah as the Jewish Christmas. I was told as much last summer when I inquired at my daughters day camp why she was given the choice of making a Christmas stocking or a clay dreidel as an arts and crafts activity in July (!): Its just two ways of celebrating the same holiday, isnt it?

Hanukkah, the Jewish Christmas? Greek Orthodox Christians do celebrate a Greek Orthodox Christmas: the same Nativity, the same birth of the Messiah, the same wise men. What Jews celebrate, however, is hardly a Jewish Christmas. The elements central to what Christmas means to Christians are clearly absent in our Jewish celebration. The holidays are hardly parallel and certainly not proportionate in religious significance. Just ask any Jewish parent who has had to sit through some public school celebration of the Christmas holidays. The splendor of Adeste Fidelis is not challenged by the folk ditty that tells us, I have a little dreidel, I made it out of clay. One is magnificent, the other banal. One makes an assertion that is theologically consequential; the other about the plasticity of clay. The disparity evokes an underlying difference between the two holidays: Christmas celebrates an affirmation central to Christian faith, while the events of Hanukkah are not at the core of Jewish history or religious belief. Take Christ out of Christmas and you have little left. You could not have Christianity without the events celebrated on Christmas. Judaism without Hanukkah, however, would look pretty much like it does already.

Light for a Dark World

On another level, the two holidays do share something deep in common. It is hardly an accident that both occur around the winter solstice. In this regard both are responses to profoundly human needs, anthropologically deeper even than the manifest theological or historical content of the two celebrations. Both come at the time of year when days are shortest (at least in the northern hemisphere where both religious traditions had their origins) and the weather the least hospitable. Both come when the darkness of night looks as if it might well prevail. And both respond by celebrating light. The lights of the Christmas tree, the Yule log and Jesus the light of the world represent light entering a dark world. Before that, on the Jewish side, at a time of year when the world grows darkest, Jews responded by lighting one light and then another and another until they had, by their own efforts, brought warmth and light into a cold, dark world. On each night of the eight-day festival, we light one more candleas well as the shamash (the helper candle), which lights all the others; by the end nine candles are burning. Hanukkah may not be the Jewish Christmas, but both Hanukkah and Christmaslike Dewali in Indiagrow out of human responses to a threatened dominance of darkness.

Hanukkah began as a celebration, instituted by the Hasmonean dynasty in Judea, of a great military victory by their ancestors over the remnants of the empire of Alexander the Great. Their celebration of Hanukkah told of the overbearing ruler Antiochus, who tried to impose his own religious practices on the Jewish population of Judea. The Macabbees, ancestors of the Hasmoneans, led a popular guerilla uprising that defeated the mighty Greek army. The rabbis, who established the patterns of Jewish life, were no admirers of the Hasmoneans. So they reshaped and transvalued the holiday. The military victory was relegated to the background. In its place the rabbis emphasized the rededication of the temple in Jerusalem that followed the victorythe name Hanukkah means dedication. And they emphasized a miracle concerning a small jar of oil for the eternal light that burned in the temple and was never to go out. Only enough oil remained in that jar to keep the flame burning for a single day, and the specially consecrated oil needed for the lamp was an eight-day round-trip journey away. Miraculously the light continued to burn for the entire eight days. For the rabbisand for the Jewish tradition that followed themHanukkah came to celebrate that miracle.

There is an element of the supernatural, then, in Hanukkah, no less than in Christmas. Perhaps we all need such assurances of hope when the night grows long and the weather raw. But the religious faith of most modern Jews does not rest on the miraculous. Hanukkah is Hanukkah with or without the miracle.

American Jews tend to hear the story of Hanukkah as an encomium to religious freedom: No one has the right to tell us how to worship. Israelis and Zionists tend to hear Hanukkah as celebrating the national self-liberation of the Jewish people: By the might of our own arms we have thrown off all who would oppress us. And when we get down to the realities of personal celebration, Jewish children (at least in the United States) may not be all that different from Christian children in the focus of their observance: presentsno matter the reason why they are given, and no matter how much we might decry it. For many, then, Hanukkah is wholly devoid of miracles.

Even so, smack in the middle of the Hanukkah story is that cruse of oil. Perhaps the greatest Hanukkah gift we are given is an encounter with perhaps. Perhaps that cruse of oil actually did burn for eight days. After all, the story of the Maccabees was written well into the time of accurate historical record-keeping. Perhaps things do occur that exceed our ability to explain. Perhaps, as Shakespeare said, There are more things in heaven and earth, Horatio,/ Than are dreamt of in your philosophy. Perhaps there is more to our world than things we can explain. Hanukkah allows us to open ourselves to that perhaps. It may well be, after all, as Albert Einstein once said, There are only two ways to live your life. One is as though nothing is a miracle. The other is as though everything is a miracle.

This we know for sure. Our lives are shaped and given richness by those things that exceed our ability to explain: love, deep contentment and happiness; the joy we feel in being with loved ones and friendsthese are all beyond the ability of the mind to comprehend. Our ability to rise above adversity, to triumph over seemingly insurmountable obstaclesthe strength to accomplish these comes from a source we do not understand and cannot begin to put into words. Indeed we overcome when reason would tell us we have been defeated. The Hasidic Rebbe Simcha Bunim (d. 1827) once taught, We dont know how[our redemption from destruction] happensbut it does. More recently Chaim Weizmann, the first president of the State of Israel, has said, a Jew must believe in miracles if he is a realist.

The miracle, in this understanding, may not be in that cruse of oil so long ago, but right now, within each of us. Hanukkah reminds us that we can find the capacity to overcome the darkness that would engulf our lives. Every one of us has the ability to overcome the forces that would oppress us. Each can break the shackles of our destructive habits and inclinations. That is a Hanukkah miracle we can celebrate at any moment when things get dark around us.

There is a story about Rabbi Nachman of Bratzlav (1772-1810), a great Hasidic rabbi, indeed the great-grandson of the founder of the Hasidic movement, and himself a profound spiritual master. He was also a man well acquainted with the darkness that can envelop us. Nachman taught that the way we light the Hanukkah candlesfirst one candle and then an additional one each nightis a profound lesson in changing ourselves and our world. When things get the darkest, he taught, it is up to us to find a single point of lightthen increase it and rebuild from there. Nachman points us toward the real Hanukkah miracle.

The greatest gift of Hanukkah may be our ability to recognize that miracles can happen for us. And the greatest miracle may well be the miracle of self-renewal that is available to us all the time. In that spirit I wish everyone a Chag Urim Sameach, a joyous holiday of lights.