Praying in the Wild: Amid bears, grief and danger, a man finds peace. 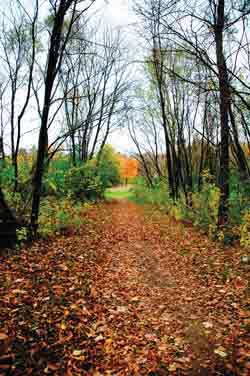 While camping in the Boundary Waters Canoe Area Wilderness in northeast Minnesota last fall, which I regularly do, I had my first encounter with a bear. Black bears are shy, but a dry summer had left few berries, and previous messy campers had advertised the area as a promising place to stave off a bears autumn hunger. A bear, its persistence overcoming shyness, visited our campsite four times in two nights. My brother and I repelled it with banging pans and bright flashlights, then moved across the lake, but I may never again slumber quite so easily in the wild.

Three weeks later, the wild edge of the northland took three of my loved ones in a freakish boating accident on Lake Superior, off the coast of Michigans upper peninsula. My father-in-law, a self-supported pastor, woodsman and fisherman in the U.P. for 50 years, died of hypothermia on the capsized boat while doing what he loved, but also with grief, having just watched his oldest son drown in an unsuccessful attempt to save his wife.

Alone Again in the Wilderness

Now, nine months later, I am back in the wilderness, this time alone. I canoe, fish, read and pray parts of the Liturgy of Hours. Suddenly, the end-of-day prayers and psalms of compline resonate with the crispness of unexpected sounds from the darkening woods, which press closer as the light wanes slowly in the northern sky.

In monasteries where I sometimes join in the daily office as a Benedictine oblate, gathering with the community to pray compline is optional these days. One sometimes hears the announcement, Compline will be prayed privately tonight. Even where the prayers of compline continue, however, its language may not mean quite so much when prayed by the light of electric bulbs powered from the industrial grid. In monasteries on the frontiers of medieval Europe, terrors of the night and dangers prowling in the darkness (Ps 91) were more than poetic metaphors. Wild animals and marauders alike made fervent the prayer that God would set a guard around us while we sleep.

Though I have camped in the Boundary Waters area numerous times, my first trip into the wilderness since looking a bear in the eye was also my first-ever solo trip. I knew I needed time away, alone, to process the low-grade grief that had accumulated in previous months. In addition to the loss of loved ones had come a dispiriting acceleration of other pains and tragediesthe messy divorce of a close friend, a brother-in-law unjustly imprisoned, parents straining to assist even as they age and, finally, my own 18-year-old son suddenly being diagnosed with cancer (he has since become a cancer survivor). Beyond a vague hope for perspective, I was not sure how to do this processing.

In hindsight, I needed to face my fears. Or better: I needed to liveto really live, with all the mindfulness that the simple but unaccustomed tasks of wilderness life requirewhile attentive to the dangers inherent in the human condition, dangers that had been there all along. After all, one probably faces far less danger from wildlife, storm or exposure in the wilderness than from traffic accidents while commuting in an urban area. When steel and plastic or concrete and drywall encase us, we think we are secure only because we have come to take their respective dangers for granted. And this is not even to begin calculating the long-term effect of toxins and global warming, or dealing with illusions of military and economic security.

Still, such rational recognition of the insecurity inherent in our human condition does not necessarily plumb the visceral parts of our being. Every evening as the sunlight recedes and the so-called witching hour approaches, the solitude I have sought in the wilderness turns to a drab, aching loneliness. But it is also the time for compline, at first simply because the prayer is prescribed, and then because I notice.

What a strange juxtaposition, yet wise! During compline I pray for both security and a peaceful death. This is not in itself contradictory, because eventually to die a peaceful death is to have slept through many nights secure. And yet the phrase introduces a certain shadow. To pray, Into your hands, O Lord, I commend my spirit, may literally express nothing but trust in God, but in fact it also recalls the hour of Jesus own death. Then the Nunc Dimittis of Simeon, from Luke 2, draws the prospect of death still closer, and indeed embraces it: Lord, let your servant now die in peace, for you have kept your promise.

In the totality of compline, then, we simultaneously pray, Keep me sheltered and I am ready to departstrange but truthful. Every evening involves a certain surrender, no doubt. In the wilderness it becomes more obvious that once we are asleep, with senses muted, dangers could come too quickly for response. Still, one cannot sleep at all without the biological surrender of relaxation, relinquishing hold, giving up control.

Yet somehow all this is compatible with taking precautions. Having met my bear, I follow the rules I have learned from rangers and wilderness guides all the more carefully now. In fact I have added a few of my own. I wear a bell so that I startle no creature at close range, and I keep a small but powerful horn always within reach. I pack my food more religiously than ever in a bear-proof container and do my best to leave fewer scents. After all, I really do not want to die soon.

Insofar as anyone can know ones own thoughts, I think my reasons have more to do with others than myself. I would not want to leave my wife and sons in the lurch. I have projects on my desk that have far more to do with a sense of calling than with career advancement, and I hope not to leave them undone. When the remote possibility of dying alone in the wilderness comes to mind, my worst foreboding has less to do with pain than with not being able to say goodbye.

So I really can pray simultaneously that I am ready to depart, even as I pray for security through the night. Off the grid, away from the glow of electric light bulbs, it makes perfect sense. Spiritual and indeed psychological health require some such combination, everywhere, always. Encased in illusions of security, we usually just do not notice.

But in the fall of 2006 I entered the compline of life. Intellectually I have long known that life is fragile. In my scholarly work, I have often made use of a poignant sentence from Book IV of Augustines City of God: The only joy to be attained [in the earthly city] had the fragile brilliance of glass, a joy outweighed by the fear that it may be shattered in a moment. But this was mainly intellectual, until grief taught me otherwise. My grief has been not only for my loved ones, after all, but for the loss of my 50-year-old yet still-innocent self, who thought he could generally assume that life goes on.

Compline has become more than a pious comfort. It has become a perfectly obvious way of life. And death. All at once. For really, whether we notice or not, we are always praying in the wild.