A Voice From East Jerusalem 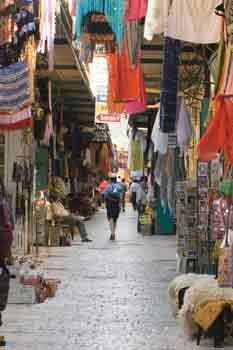 Editors Note:East Jerusalem, often called by journalists Arab East Jerusalem, has been for centuries the heart of Palestinian life. After the 1948 Israeli War of Independence, it continued to serve as the center of Palestinian commercial, religious and cultural activity. Even with the unification of the city under Israeli rule in 1968, it remained at the center of Palestinian existence. The establishment of the Palestinian Authoritys administrative center in the neighboring West Bank city of Ramallah, following the 1993 Oslo Accords, diminished its role some, but with the reasonable expectation that with a final peace agreement, a formula would be found for Israelis and Palestinians to share the city and for East Jerusalem (probably the suburb of Abu Dis) to become capital of a Palestinian state.

Israeli security measures, including the security barrier or wall, that followed the outbreak of the Al Aqsa intifada in 2000 have effectively divided East Jerusalem from its West Bank hinterlands. At the same time, Israeli settlement, land confiscations and security construction continue to diminish the land area available for Palestinian habitation and encourage the growth of the Israeli population in formerly Palestinian neighborhoods.

Jerusalem is today facing its biggest challenge since the Israeli occupation of the city began in 1967. The occupation is now in its 40th year, with no end in sight. Palestinians are becoming poorer. Poverty, which increased in the last decade, is greater than at any time in the last 40 years.

The occupation of the Palestinian people has set off a brutal policy of oppression that continues to this day. It brought restrictions on movement, employment, religious worship, education and travel. It brought the demolition of homes, arrests and imprisonments, deportations, denial of basic human rights and control over all aspects of life. It brought economic control and strangulation, targeted assassinations, collective punishment and the building of walls and enclaves to separate and segregate people.

Forty years ago Catholics in Jerusalem saw the birth of Caritas Jerusalem. (This agency is part of Caritas Internationalis, an official institution of the Catholic Church and one of the worlds largest humanitarian networks, operating in more than 200 countries and territories.) Caritas Jerusalem was formed in response to the aftermath of the Six Day War. Many hundreds of families were in need of the loving hand of the church in their lives, which had been destroyed by the war. Caritas Jerusalem began providing humanitarian and emergency aid, social welfare, family support, emergency medical assistance, education assistance for school children and university students, employment generation, home renovations, womens empowerment through education and scholarships, peace and reconciliation projects and advocacy work.

Caritas continues after 40 years of service, keeping the doors of hope open, working to fulfill its mission to build a civilization of love. Caritas chose this theme based on the commandment of Jesus to love one another as I have loved you (John 15:12). Today our work reaches out to all in Jerusalem and the Holy Land regardless of race, creed or ethnicity. We cannot do this alone, but we continue to be accompanied by friends and partners who are our lifeline.

The Aftermath of Dashed Hopes

The millennium year 2000 was a time of great hope for a breakthrough to peace. The signs on the horizon were positivetourism was looking up (three million tourists were expected in the Holy Land that year); culture and art were flourishing; people were positive for the first time in many years. On Sept. 28, 2000, however, Ariel Sharon, who was then the political opposition leader, toured the compound of the Al Aqsa Mosque with more than 1,000 Israeli policemen. This triggered a renewed intifada (uprising). Amid the events that followed, many people were killed, and the cycle of violence escalated. It continued for the next few years.

Meanwhile Caritas works in the occupied Palestinian territories to provide emergency and development-related actions to those in the greatest need. Currently, Caritas operates three health clinics in Taybeh, Aboud and North Gaza, and two dental clinics in Taybeh and Aboud; an elderly care center in Ramallah; a drug counseling, awareness and prevention center in Jerusalems Old City; and a community center in Ain Arik. (All but Gaza are in the Jerusalem region.) Our development projects focus on community development, health, water, nutrition and microfinance. Caritas funds income-generating, housing, emergency and educational loans.

How can we break out of the current impasse and rebuild the broken lives of Palestinians? The way forward is clear. Humanitarian assistance can cushion a deteriorating situation, but it ultimately cannot stop the decline, said David Shearer, head of the United Nations Office for the Coordination of Humanitarian Affairs. Ultimately only a political settlement can generate a significant improvement, he added.

Christians Living in the Holy Land

I do not doubt that Catholics in the Holy Land (roughly 169,000 people in the Latin and Eastern rites) will persevere, though their number and that of Christians in general (some 350,000, including the Orthodox and other denominations) has decreased. Two thousand years of uninterrupted existence and experience have made the mother church strong in history and heritage, and it has been strengthened further by diversity.

Caritas Jerusalems advocacy campaigns and relentless efforts to present a well-balanced picture of the situation have raised awareness in the Western world, breaking down some stereotypes and misconceptions related to the Palestinian struggle. We have great hope for the future. We are reminded by our Lord that if your faith is the size of a mustard seed, you will say unto this mountain, Move from here to there, and it will move; nothing will be impossible for you (Matt 17:20). But to make the vision for peace a part of our daily mission requires us to take action (Faith without works is dead, Jas 2:26) consistent with our beliefs. In regard to the Palestinian/Israeli conflict, it means building bridges between Palestinians and Israelis.

The Holy Land does not need walls but bridges, Pope John Paul II said before an audience at St. Peters in November 2003. During his 2000 visit to the Holy Land the pope had told the Israeli and Palestinian people, It is the duty of believersJews, Christians and Moslemsto seek every means to promote understanding and mutual trust in favor of peace for a land that God wanted holy. Benedict XVI, too, has reminded us of the importance of community building: Let us pray for Jerusalem to be always more and more a place of communion among religions, a place of peace.

In 2008, Caritas Jerusalem will join the entire Catholic community in the Holy Land in welcoming a new Latin Patriarch of Jerusalem, Archbishop Fouad Twal. May God bless his ministry as he has blessed that of Archbishop Michel Sabbah, the current patriarch.

Catholic Life in Jerusalem Since 1967

1980Knesset declares Jerusalem one and united the capital of Israel.

1989First joint statement of Heads of Christian Communities in Jerusalem on the first Palestinian intifada.

1992Assembly of Catholic Ordinaries of the Holy Land established.

1993Signing of the Fundamental Agreement between Israel and the Holy See. Latin Patriarch Michel Sabbah issues pastoral letter Reading the Bible in the Land of the Bible.

1994Memorandum of the Patriarchs and Heads of Churches on Jerusalem.

1995Synod of the Diocese of Jerusalem opens; memorandum of the (Vatican) Secretariat of State on Jerusalem.

2000Signing of Basic Agreement between the P.L.O. and the Holy See; pilgrimage of Pope John Paul II to the Holy Land and Jerusalem; outbreak of second (Al-Aqsa) intifada.

2002First coordination meeting of representatives of bishops conferences of Europe and North America with the Assembly of Catholic Ordinaries.