Jerusalem, 1967-2007: A brief introduction to the challenge posed by Jerusalem

Jerusalem, 1967-2007: A brief introduction to the challenge posed by Jerusalem 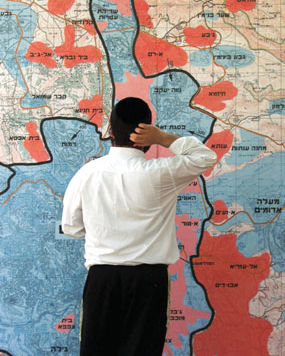 Last spring Israel marked the 40th anniversary of the Israeli army’s capture of East Jerusalem and the Old City in the Six Day War (June 7, 1967). For the struggling young state and for Jews around the world, it was a momentous occasion. Their ancient capital, the symbol of their nation, where Jews pray every Passover to return, was now under Jewish control. The Jewish Quarter, the Western Wall of the Second Temple and other Jewish holy sites, closed during two decades of Jordanian dominance, were reopened to Jewish pilgrims and residents. To Palestinians, by contrast, it was al-Nakba, “the Catastrophe,” deepening the wounds of the defeat in 1948.

At the very beginning, Israel made an effort to accommodate the Muslim population. The victorious troops took possession of the Temple Mount, which Muslims call Haram al-Sharif, the Sacred Sanctuary, and Israelis Har Habayit. It is the site of the Dome of the Rock, the third holiest site in Islam, and the ancient Al-Aqsa Mosque. Quickly comprehending the diplomatic and interreligious implications of Israeli control of the shrines, Moshe Dayan, the dashing, one-eyed Israeli military commander and in private life an accomplished amateur archeologist, opposed the erection of a synagogue on the site and forbade public prayers by Jews there as well. Arrangements were set up for operational control of the sanctuary by Muslim religious authorities, while Jews were permitted to repopulate the old Jewish Quarter from which they had been driven; the Western Wall, to Jews the most palpable reminder of their ancient religious heartland, was put under Israeli control.

While religiously Jerusalem is a symbol of eschatological peace, for the last 40 years it has remained contested ground. In 1967 Israel annexed East Jerusalem, the portion of the city under Jordanian control since 1948, with a majority Muslim population, thereby “unifying” the city. In 1980, the Knesset transferred the national capital from Tel Aviv to Jerusalem. The move was not accepted by the international community, however, because Jerusalem was occupied territory, which under the U.N. Partition Plan of 1947 was to be under international control. To this day, most nations retain their embassies in Tel Aviv, Israel’s first capital. Palestinians persisted in claiming Jerusalem as theirs and hoped that it would become their future capital.

In the 1993 Oslo Accords, the future status of Jerusalem was placed on the agenda for final status talks set to open in 1996. Later preparations were begun for establishing a Palestinian capital in Abu Dis, a village on the outskirts of the city. But in 2000, at Camp David, the future of Jerusalem and particularly of the Old City and the Temple Mount were issues on which the talks foundered. That September Ariel Sharon’s provocative march onto the sanctuary with more than 1,000 police and soldiers to protect him ignited the second intifada.

Over the years the Israelis have steadily encroached on Arab East Jerusalem, while depriving Arab residents of fundamental services. Hard-line settlers have seized and occupied Arab homes in the Old City, Silwan, Ras al Amoud, Sheik Jarrah and other Arab neighborhoods. In 1990 settlers occupied the Greek Orthodox Saint John’s Hospice in the heart of the Old City. In 1999 ultra-Othodox Jews, or Heredim, declared a tomb in Sheik Jarrah, which experts claim is not Jewish, as a holy site, and it became the leading wedge of new Israeli settlement in that area. Just this spring some property owned by the Passionist Fathers at the edge of the city was confiscated for security purposes. When Jerusalem will become in fact the city of peace longed for by believers is increasingly hard to say.

On the 40th anniversary of the unification of the city, America offers several perspectives on Jerusalem, its history, recent life and future possibilities. Let us all pray for the peace of Jerusalem.

Jerusalem in the Jewish Consciousness by Gerald M. Meister

A Voice From East Jerusalem by Claudette Habesch

Dignity in Division by Daniel Levy

A Plan for a Workable Jerusalem by Ghaith al-Omari

Show Comments (
1
)
Comments are automatically closed two weeks after an article's initial publication. See our comments policy for more.
Edward McCarthy
12 years 11 months ago
Thanks for AMERICA’s several essays on Jerusalem. All were illuminating. I wish I could find in them more grounds for optimism than I in fact am able to. If the very reasonable presentations made by Daniel Levy and Ghaith al-Omari were at the core of discussion, one could hope. However, it is Rabbi Meister who speaks from within the Israeli Government establishment, and his argument gives little ground for thinking that the Israelis will give up any portion of Jerusalem. His case, almost wholly Bibilical and religious, is virtually unanswerable in rational terms. It is substantially the case of the ideological settlers, as applicable to Hebron and the Occupied Territories generally as to Jerusalem. Undoubtedly, there are comparable rigidities on the Palestinian side. Nonetheless, two points can be made. First, the Israelis are the foremost recipients of American foreign aid. We Americans enable their policies and behavior. Second, it is in fact hard to know the nature and extent of intransigence on the Palestinian side so long as Israeli and American policy is to exclude Hamas and others we do not like from dialogue and negotiation. What we know with certainty from Rabbi Meister’s essay is that the Israelis do not appear ready to do what must be done for peace. And that, given our very supportive relationship with Israel, is justifiably a matter for particular American focus. So long as American politicians, motivated as much by domestic political considerations as by concern for Israeli security, continue to vote unquestioningly for items like President Bush’s $30 billion increase in military aid to Israel, it seems likely that Israel will be inclined more toward the 100-year struggle with the Palestinians preferred by the settlers than to an increasingly unviable two-State solution. Ed McCarthy (Co-Chair, Maine Peace and Justice in Israel and Palestine)
Advertisement

Drew Christiansen, S.J., editor in chief of America, was for 13 years the principal policy adviser to the U.S. Conference of Catholic Bishops on Mideast affairs. In 1998 he organized the Episcopal Conference Coordinati