The Partial-Birth Decision: Criticism of the Supreme Court shows confusion about the role of religious values in a democratic society. 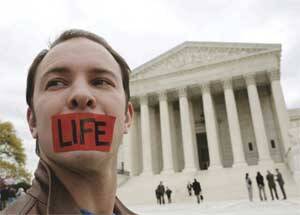 The case, Gonzales v. Carhart, is a classic 5-to-4 split decision. Five justices—Anthony M. Kennedy, John G. Roberts, Antonin Scalia, Clarence Thomas and Samuel A. Alito Jr.—determined that the federal partial-birth abortion ban is constitutional. These justices happen to be Catholic, and critics who did not understand the legal reasoning in the majority opinion warned that it reflected a bias toward Catholic doctrine that could lead to the rejection of Roe v. Wade, the decision that established a woman’s right to choose an abortion based on a constitutional right to privacy.

The Catholic Church’s doctrinal position on abortion is clear. All abortions end a human life and are immoral. If the faith of the justices had dictated their vote, the reasoning in their opinion would have laid the foundation for overruling Roe v. Wade and its successor, Planned Parenthood v. Casey. Instead, the majority opinion applied these rulings to the federal statute and, in so doing, retained the basic tenet of Roe v. Wade, which is that women have a virtually unfettered right to most types of pre-viability abortions.

The ruling will not reduce the number of abortions performed in the United States, because the law it upheld does not ban abortions; it merely regulates a particular type of abortion technique that Congress determined was “gruesome and inhumane.” The Catholic majority, therefore, did not base their decision on Catholic teaching but instead made a judicial decision consistent with legal precedent. As a matter of fact, their decision reflected the sentiments of most Americans, including Catholics, who favor limitations, but not a total ban, on abortions.

The majority of the court in this decision, like the majority of the American people, acknowledged the moral ambiguities presented by an unwanted pregnancy. Nevertheless, their judicial integrity was called into doubt because their legal decision, based solely on statutory language and constitutional analysis, coincided in part with the position of their church.

The minority in Gonzales v. Carhart dissented because the statute, which contains an exception to preserve the life of a woman, does not also include an exception to preserve the health of a woman. According to Congress, which passed the ban on partial-birth abortion, the concern of the minority opinion represents a distinction without a real difference; there are, after all, safe alternatives to the partial-birth technique. The majority decision, in effect, simply affirmed the constitutional authority of Congress to make findings of fact regarding the efficacy of medical procedures.

The dark warning about the religious affiliation of the Gonzales v. Carhart majority illustrates the need for a better understanding of the proper role of religious belief in American politics and the legitimate role for religious values in the public debate. The attention paid to the Catholic affiliation of the Supreme Court justices who upheld the partial-birth abortion ban is rooted in the naïve and historically uninformed assumption that the separation of church and state prohibits any religious influence on public policy.

There is a profound difference, however, between a government that is controlled by a religious denomination and a government whose policies are informed by the religious values of its citizens. Any government that would totally disregard moral values that are rooted in religious faith would be hopelessly doctrinaire, unable to represent a society that values freedom of religion.

Jon Meacham’s book American Gospel demonstrates that religious belief always has informed our political and legal decisions. Thomas Jefferson’s personal belief in a beneficent creator, for example, formed the foundation for those “inalienable rights” of “life, liberty and the pursuit of happiness” that are the cornerstone of our political system. Citizens of the United States should not support political leaders or public policies simply out of obedience to religious authorities. At the same time, we cannot dismiss the relevance of moral values in forming public policy simply because these values may be rooted in the different religious beliefs of American citizens.

Those who insist on the total dismissal of any religious influence on U.S. politics and jurisprudence should reflect on those voices that would have been silenced if an impenetrable wall had kept religious values out of public policy. President Lincoln would not have issued the Emancipation Proclamation; Martin Luther King Jr. would have been politically irrelevant; the Civil Rights Act of 1964 would not have been passed; and Brown v. Board of Education would have kept schools segregated.

American politicians and jurists cannot base their decisions about public policy on their personal obedience to any religious authority. At the same time, to insist that moral values rooted in religious faith have no place in any debate on public policy would undermine the foundation of a democratic society, namely the right of its citizens to participate in that debate.

Benedict XVI on Faith and Reason

How can religion and politics, faith and reason, be reconciled and properly put to use in our pluralistic society? Pope Benedict XVI addressed this issue in his first encyclical, Deus Caritas Est, when he reflected on the relationship of faith and reason in the search for justice in society. “Faith by its specific nature is an encounter with the living God—an encounter opening up new horizons extending beyond the sphere of reason. From God’s standpoint, faith liberates reason from its blind spots.... Faith enables reason to do its work more effectively and to see its proper object more clearly” (No. 28a).

To some it may seem strange that the pope goes on to warn that reason can be compromised by the influence of special interests, since secularists would be quick to identify religion as the classic special interest. But Dean Brackley, S.J., issued a similar warning in these pages in his article “Higher Standards” (2/6/2006). Father Brackley acknowledged that reason is often clouded by biases—religious, economic, ethnic and political. The believer’s task is to recognize the biases that influence the beginning of all analysis and replace them with understanding. “Prejudice is embedded in my identity,” Father Brackley wrote.

Authentic religious faith that leads to personal moral conversion helps us recognize our personal prejudices and achieve a more disinterested exercise of reason. Religious discourse can lead to inner transformation, greater respect for the other and enlightened persuasion. This concept of religious reason is the one advanced by Benedict XVI.

The pope explicitly states that it would be improper for the church to “attempt to impose on those who do not share the faith ways of thinking and modes of conduct proper to faith.... The church wishes to help form consciences in political life and to stimulate greater insight into the authentic requirements of justice...” (No. 28a). This is the same process of religious reflection that brought Thomas Jefferson and our other founders to form a liberal democracy.

Self-governance is not an easy task. Nations often stray from their founding principles. Attention to the religious values of our populace can provide a compass for us as we struggle to remain true to the spirit of liberty that is central to our democratic republic. If we do not allow our collective belief in the “blessings of liberty” to influence our political decisions today, we run the risk of eroding the foundation of our democratic aspirations, the belief that U.S. citizens should continually aspire to establish a society that promises “liberty and justice for all.”

Critics of the Catholic Supreme Court majority should realize that the religious affiliation of the justices does not predetermine specific outcomes, but rather, challenges them to use all their abilities—reason and compassion—to come to just and constitutional decisions. We can only hope that the non-Catholics on the bench do the same.

Ellen K. Boegel, who teaches legal studies at St. John’s University in New York, clerked for the United States Court of Appeals for the Second Circuit.