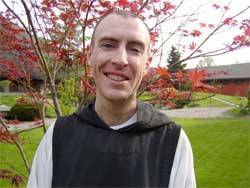 The winner of the 2007 Foley poetry contest is Lost and Found by John Slater. Slater is the pen name of Brother Isaac, a Trappist monk from The Abbey of the Genesee in upstate New York. Born in Toronto, Ontario in 1974, Brother Isaac studied classics at Trent University before entering the monastery in December 1999. In addition to writing poetry, Brother Isaac helps to bake Monks Bread, the monasterys main source of income. He also told us that he helps in the plumbing dept. and infirmary as well as tending our quasi-Japanese garden. Brother Isaac agreed to an interview with America by e-mail.

How long have you been writing poetry?

Why did you start writing?

Thats something I continue to discover each time Im given a poem to make. Stanley Kunitz spoke of ones art as the gift you have made to the world in acknowledgment of the gift you have been given, which is the life itself. And I think the world tends to forget that this is the ultimate significance of the body of work each artist produces. It is not an expression of the desire for praise and recognition, or prizes, but the deepest manifestation of your gratitude for the gift of life.

Lost and Found, I suspect, grew from and, I hope, expresses, some ray of gratefulness for the encounter it describes.

Why did you choose to join the Cistercians?

Thats also something I continue to discover. The silence, solitude and concentration, the simplicity of the life attracted me. Mertons Seven Storey Mountain and New Seeds of Contemplation meant a great deal to me; that someone with his passion for writing could make a go of it as a monk was encouraging as well. The first Cistercians called the monastery a schola caritatis, a school of love; theres nothing more important to learn, and nothing I need more help learning. Monastic life can serve as a way to remain true and faithful to the experience of Gods mercy and forgiveness that one has enjoyedand to our hearts own deepest desire.

Ultimately, of course, it was God who chose me for the life not the other way around.

There are many connections: a degree of quiet and solitude, reading, leisure, the work of the heart, a certain marginality

Cloistered monastic life is something like living in a sonnet. There is a definite skeleton, a strict set of norms and limits given. For the poet, the rhyme-scheme and so on can challenge and stretch his imagination in fresh and surprising ways; they force him to question what is essential to the work and to prune away the superfluous. The rules exist to secure and support a certain inner libertyat the same time the very freedom unleashed, intensified by confinement in such tight quarters (monastic life is also like bonsai) tests and pulls against the edges. Where the mind of the poem wants to go is ultimately more important in discovering its true form than adherence to external rules just as charity often demands of monks that they bend the rules, miss an office to care for a sick brother or something.

What was the genesis of Lost and Found?

The episode described in the poem took place more or less as described. It was a Sunday afternoon; most were resting, and a few of us had just finished washing the dishes. I walked into the hall, and here was this boy. In the sonnet of cloister-life, minor disruptions, anything Out of the Ordinary, gains a particular definition. While that was the case here, at the same time the encounter felt oddly scripted. The straightforward narrative form of the poem, like the ordered, regular world of the cloister, is complicated and even subverted by the surprise presence of an unpredictable guest.

The slant allusion to the story of Jesus being found in the temple raises questions about who is who. The Word who made the universe is a 12 year old religious prodigy in 1st century Palestine who in turn is a 21st century retarded boy strolling into a cloistered monastery as Jesus entered the temple. Although its the boy whos ostensibly lost, one has the sense its the speaker, dozing over his scriptures, whos been found, and wakened, by the Word. Like the parents, the speakerand we readersfeel relieved but not altogether surprised when, after a time of dryness, the grace of our faithful God unexpectedly wanders into our ordered lives.

This question prompts me to note that grace is not always disruptive; theres a grace of everydayness too, what one monastic writer calls creative monotony. We wake at 2 a.m. for Vigils, the first of seven times of communal prayer; after that there is a 2 to 3 hour stretch of silent prayer and reading. The rest of the day is a balance of work and prayer with intervals to read, rest and shift gears. The Mass is the center of our day, what everything flows from and converges on

We have a Web site. There is also short film about our life.

Its safe to say that, for many people, Thomas Merton is the most famous Trappist poet. What do you think of his poetry?

I think that Mertons best poetry was definitely in his prose; ironically, he wrote so much prose that it sapped the concentrated energy poetry requires as he himself observed at one point. In one of the later journals, as I recall, he expresses a desire to write less prose and focus more on poetry. Perhaps he had in the back of his mind T.S. Eliots remark: when Merton sent him some poems Eliot replied, Write less, revise more.

Who are some of your favorite poets?

Show Comments (
2
)
Comments are automatically closed two weeks after an article's initial publication. See our comments policy for more.
mary davis
14 years 4 months ago
I was glad to hear more about the trappist monks and I enjoyed brother's poetry. It was refreshing and the article on how he lives and what prompted him to write was very interesting also.I would like to read more of his work and also I will be looking up and reading some of Thomas Merton's work also.
14 years 4 months ago
It was serendipitous (or grace-filled?) for me to read "Lost and Found" the morning of the allusory Gospel passage, June 16. Congratulations Br. Isaac, for experiencing scripture as so naturally contemperaneous. An infinity of experiences parallel those of Jesus, but so few are translated so gracefully into such simple language. May the Holy Spirit continue to inspire your gifts.