Benedict: What's in a Name? 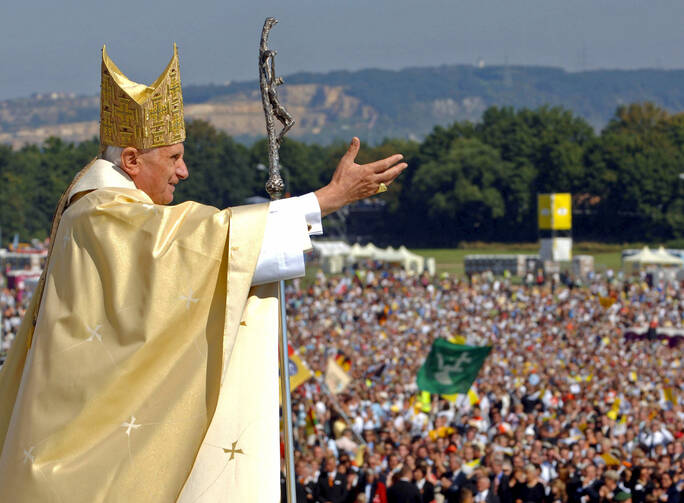 By their choice of a name, newly elected popes in recent times have generally intended to project an ideal or suggest a program for their pontificate. That was, however, not true for Pope John XXIII, whose choice he explained as simply a name “dear to me because it was the name of my father, because it is the dedication of the humble parish church where we were baptized and because it is the name of innumerable cathedrals throughout the world, and first of all of the blessed and holy Lateran Basilica, our own cathedral.” But both John Paul I and John Paul II had a programmatic intent in their choice; they meant to indicate their intention of continuing the work of the two popes of the Second Vatican Council.

Pope Benedict’s reasons for his choice are less personal than John’s and less immediate than the two John Pauls. On April 27, 2005, he explained in his first general audience that he chose his name in veneration, first, for Pope Benedict XV (1914-22), a “courageous prophet of peace.” He thus placed his ministry “in the service of reconciliation and harmony among peoples.” His choice was also meant to honor St. Benedict of Nursia (c. 480-c. 550), “whose life evokes the Christian roots of Europe” and inspires us to “hold firm Christ’s central position in our lives.” What’s to be learned from a look at these two personalities?

Although St. Benedict is the patriarch of Western monasticism and the co-patron of Europe (along with Sts. Cyril and Methodius and St. Catherine of Siena), little is known about him. After gathering disciples in a monastery at Subiaco near Rome, he went on to found the monastery of Monte Cassino near Naples. There he composed the final version of his Rule, which in time displaced practically all other monastic rules in the West. It is the Rule that assured him his place in history.

What little we can say for sure about the personality of St. Benedict we know by inference from his Rule. In it he incorporated traditional monastic teaching, but adapted in ways that made it viable in different situations down through the centuries. While of course stressing obedience and discipline, the Rule is particularly noteworthy for its moderation and balance. The Prologue to the Rule states: “We intend to establish a school for the Lord’s service. In drawing up its regulations, we hope to set down nothing harsh, nothing burdensome.” In keeping with that norm, for instance, Benedict allowed his monks up to half a bottle of wine per day, even though “we read monks should not drink wine at all.”

In the Rule the abbot is the key figure, who must adapt himself to the different personalities of his monks. He “must vary with circumstances” and “so accommodate and adapt himself to each one’s character and intelligence that he will not only keep the flock entrusted to his care from dwindling, but will rejoice in the increase of a good flock.” Although the abbot has the final word, he will not make any important decision before calling the whole community together and explaining what the business is, so that he might hear the members’ advice. “The reason we have said this is that the Lord often reveals what is better to the younger.”

In contrast with the author of the Rule, we know a great deal about Pope Benedict XV, even though he is sometimes considered a “forgotten pope.” Born into an old patrician family in northern Italy in 1854, Giacomo della Chiesa earned a degree in civil law at the University of Genoa before entering the seminary. He moved up the ecclesiastical ranks quickly but was created a cardinal only a few months before the conclave that elected him pope on Sept. 3, 1914, at the very outbreak of World War I. He used the meager means at his disposal to try to end the conflict and mitigate its atrocities. His unwavering neutrality, even after Italy entered the war on the side of the Allies, and his denunciation of the war as a “useless massacre” won him distrust from both sides—a “German pope” to the Allies and a “French pope” to the Central Powers. Benedict committed papal funds to the relief of victims both during and after the war to such a great extent that the Vatican became known as a “second Red Cross.” It is humanitarian efforts like these that have won appreciation for him and that Benedict XVI alluded to when he explained his choice of name.

Benedict XV’s first encyclical, Ad Beatissimi (Nov. 1, 1914), began with a condemnation of the war but then ranged over other subjects like class conflict, the evils of Socialism and the necessity of obedience to ecclesiastical authority. In it he also renewed “in all its fulness” the condemnation of Modernism by his predecessor, Pius X. That “synthesis of all heresies” was “a plague not yet entirely stamped out...that lurks here and there in hidden places” (No. 25).

Contrary to what is often said about him regarding Modernism, therefore, Benedict XV did not notably swerve from the position of Pius X. He supported the close vigilance of the Holy Office, which, for instance, in 1920 once again condemned the opinion that Moses might not be the author of the Pentateuch, and he himself held similar views, espousing in his encyclical Spiritus Paraclitus (1920) the view that the inerrancy of the Bible applied to everything that was said in it. He continued to require of priests the “Oath Against Modernism,” which professors in seminaries had to renew in public annually.

Nonetheless, a certain mitigation occurred. The number of condemnations and dismissals from teaching posts diminished. Upon his election, Benedict almost immediately removed Cardinal Rafael Merry del Val as secretary of state, a step interpreted as a sign of the new pope’s desire to distance himself from the intransigence that del Val had come to represent. In Ad Beatissimi he exhorted Catholics to refrain from affixing “the stigma of disloyalty to faith or to discipline” simply because they disagreed in some matter still not definitively settled.

In 1921, toward the end of his pontificate, he suppressed the Sapiniere or Sodalium Pianum (Sodality of St. Pius V), a vigilante organization with an international network of informers about people who did not share the ultraconservative views of Umberto Benigni, its founder—an organization Pius X had privately encouraged. This measure contributed to a modest change in the intellectual climate within the church. Benedict showed, moreover, a cautious interest in the ecumenical movement, and in 1919 he created the Vatican Congregation for the Oriental Churches and founded the Pontifical Institute of Oriental Studies, partly in the hope of fostering better understanding with the Orthodox.

As his early studies suggest, Benedict XV firmly believed in law as a bulwark against war and oppression, and he believed in its importance in the church as well. One of the most important acts of his pontificate was the promulgation on May 27, 1917, of the first Code of Canon Law. Even more important, however, was his plea for the creation of indigenous clergy and hierarchies in missionary lands. Although this had long been an ideal, attempts to accomplish this continually foundered for a variety of practical and political reasons. Benedict’s encyclical Maximum Illud (Nov. 30, 1919) put an end to the ambivalence. It has been described as “one of the greatest revolutions ever attempted by a pope.” Twenty years later, 48 mission territories were in the care of native bishops.

What’s in a name? Although to change one’s name is to some extent to change one’s identity, historical information about these two impressive figures will not by itself give us much help in projecting the program and policies of Pope Benedict XVI. The image we entertain of historical figures is sometimes far removed from the historical reality; and even if we are faithful to history, we can be attracted to one aspect over another. Only time will tell which aspects, if any, of his two patrons Pope Benedict XVI will in fact take to guide him on his way.

John W. O’Malley, S.J., professor of church history at Weston Jesuit School of Theology in Cambridge, Mass., is the author, most recently, of Four Cultures of the West (Harvard Univ. Press, 2004).