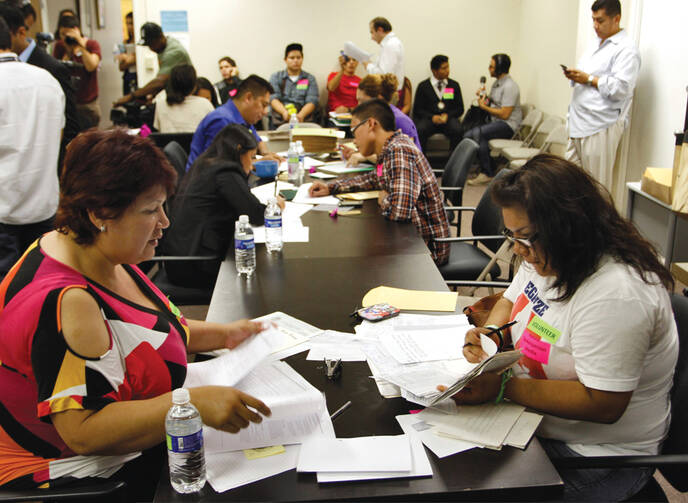 On a Saturday morning in autumn, as rare tornado warnings and sheets of pouring rain spread through New York City, hundreds of families lined up to enter the gymnasium of St. Joan of Arc Parish in the Jackson Heights section of Queens. They filed through a series of workstations fashioned from folding chairs and tables where lawyers and Spanish language interpreters asked them a litany of questions: How did you enter the United States? Were you detained at the U.S.-Mexico border? Have you ever been arrested? Are you enrolled in school? Hardly distracted by their dripping wet clothing and the roar of wind and rain whipping around outside, the participants answered dutifully and produced bundles of papers, including school transcripts, passports and family photos, laid out on tables as proof that they have lived in this country since childhood.

The purpose of these interactions was to determine each person’s eligibility for relief under an Obama administration program formally known as Deferred Action for Childhood Arrivals. If granted deferred action status, a person who entered the United States before the age of 16, either by crossing the border without documents or with a visa that has since expired, and meets certain other basic requirements, would receive a two-year guarantee of reprieve from deportation as well as authorization to work legally in the United States. In other words, for the hundreds of young people patiently but intently working their way through the concourse of this Catholic school gym in Queens, this might be their first step toward the possibility of a normalcy enjoyed by many of their peers but painfully denied to them for as long as they could remember. As I observed their progress through our makeshift legal clinic, however, I wondered uneasily where this path would really lead them.

On June 15, 2012, Homeland Security Secretary Janet Napolitano announced that her agency would carry out administratively what Congress apparently could not accomplish legislatively. The deferred action policy is widely regarded as the most significant development in immigration law in the past 25 years. Nearly one million individuals nationally are believed to be eligible for relief.

As news of President Obama’s plan for granting a form of immigration relief to undocumented immigrant youth flashed across our Twitter feeds, I was immediately pulled into a frenzy of speculation about the number of potential deferred action applicants and planning for the anticipated flood of phone calls and requests for legal assistance. My staff of fellow attorneys and I opened our calendars and the diocesan directory, looking for gymnasiums, cafeterias and other large spaces in which to schedule workshops and legal clinics, and I sent an e-mail message to our roster of volunteer attorneys, former interns and friends who might consider helping us to process what we believed (and slightly feared) would be thousands of deferred action applications.

The geographic boundaries of the Diocese of Brooklyn, encompassing the New York City boroughs of Brooklyn and Queens, mark the center of the past 50 years of immigration in the northeastern United States. Queens alone is one of the most ethnically diverse urban areas in the nation: 48 percent of its 2.2 million residents are foreign born. Our office banners read “Diocese of Immigrants,” and Mass is celebrated in 29 different languages each Sunday. Although larger shares of the estimated 11.5 million undocumented immigrants in this country reside in California and Texas, New York City is believed to be home to more than a half-million individuals who lack legal immigration status.

The community of nonprofit immigration legal services providers to which we belong and which includes more than 200 diocesan immigration programs nationwide was given additional time to prepare for the flood of applicants as we waited for the Department of Homeland Security to release its application guidelines and forms. On Aug. 15 the waiting ended and the floodgates were opened. We are now in full-service provision mode for undocumented immigrant youth, screening for eligibility, preparing applications and assembling evidence to support claims for relief under this new administrative policy.

Standing in the gymnasium in Queens as we welcomed and assisted hundreds of applicants, I experienced conflicting emotions. I have conducted scores of similarly structured community-based legal clinics over the past 10 years—some at St. Joan of Arc and others in surrounding neighborhoods, where the concentration of undocumented immigrants is also substantial. Typically, these exercises in lawyering were frustratingly simple as I quickly concluded that one person after another was ineligible for any form of immigration relief. Explaining the sad reality of our broken immigration system to each person who waited to speak with me in the hopes of finding a path to legalization, I felt drained and useless. Many years of doing this work takes a toll on a public interest lawyer. But now the situation has changed. It is especially meaningful for me to present—at long last—an opportunity in the law to the familiar parishioners who stand in line.

But how much will these young people benefit if their applications are approved? That question weighed on me as I explained the parameters of deferred action to groups of families waiting their turn at the screening station. It has been widely noted that the new policy is not a means of obtaining lawful status or a path to citizenship. The program merely guarantees that an approved applicant will not be subject to removal or deportation for two years and provides for employment authorization. It is a sort of limbo—albeit one that is preferable to their current situation—that could change if the program expires and no further reform of the system occurs. Since the illegal presence in the United States of each applicant becomes known to the government, some fear that applicants may be subjected to deportation proceedings when the program expires.

My sense that this is only a minor and politically precarious improvement upon our miserable immigration policy is heightened by the visual appearance of the applicants listening to me while surrounded by their grandparents, mothers, fathers and siblings. Each of these family portraits causes me to reflect upon the very narrow scope of eligibility for relief. I see the faces of family members excluded from this opportunity. They dream of getting their own papers, but they are not “dreamers” as the term is defined by this policy. Amid the exhilaration of processing these applications, it is sobering to observe those left in the shadows.

I imagine these ambiguous feelings are shared by the many attorneys, immigration counselors and volunteers working long hours to assist in the submission of hundreds of thousands of deferred action applications. In the first few weeks more than 72,000 applications were submitted. Our office continues to assist dozens of eligible youth weekly. In addition to the substantial volume of applicants, what else might indicate that this development is a positive one in the world of immigration law? I hope that the many young immigrant adults who received some sense of protection will be further emboldened as a force for political change. This significant but limited victory for justice may have been prompted by a pressured political calculation, but the many beneficiaries braving the storm and filling the gymnasium at St. Joan of Arc and their peers throughout the country may also persevere through the political tempest of the immigration issue and help generate more executive and legislative actions like this one.