'Ready to Be Martyrs': Egyptian Christians claim their ancient roots. 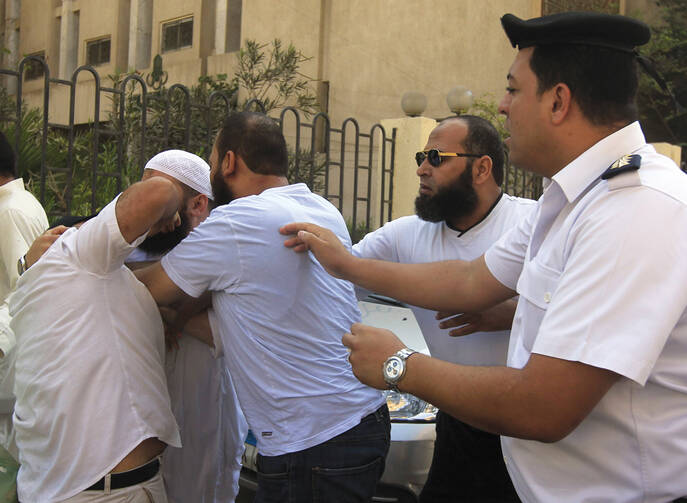 My sharpest memory from Cairo is what my driver said: al-Masih biygarribna, “Christ is testing us.” I had hired Sami to drive me around the city. As soon as I saw on his wrist the washma, a faded tattoo in the shape of a cross, I knew he was a Copt, a member of Egypt’s Christian minority, a community that predates the Muslim presence by centuries.

Since the early 1980s, I had been to Egypt many times as a student of Arabic, as a researcher and as a tour guide on Nile cruise-boats. But this visit in 2012 was my first time back since the onset of the Arab Spring and Egypt’s “Lotus Revolution.”

As we drove, Sami told me about the persecution Copts endure at the hands of Egyptian Salafists. Salafists are Muslims who want an Islamist government in which the harshest interpretations of Islamic law (Shariah) are privileged at the expense of both non-Muslims and progressive-minded Muslims. “Things had been less worse for us under Mubarak,” he said. Hosni Mubarak, Egypt’s authoritarian ruler until his ouster in the revolution, had suppressed Islamist radicals. But now, said Sami, the Salafists feel bold enough to burn churches, incite anti-Coptic riots and call openly for the expulsion of Christians.

I told him the statistics: in 2011 and 2012, since the revolution’s onset, over 100,000 Copts have fled Egypt. “Well, I’m not going to leave,” Sami insisted. “Christ is testing us. I tell my friends to stay. Christ could end this suffering, this trial, at any time. ‘How will you feel,’ I tell my friends, ‘if you’re in Canada instead of Egypt when Christ returns?’”

I pondered this apocalyptic thought as we skirted Tahrir Square, the scene of recurrent confrontations between demonstrators and Egypt’s military, and passed the blackened ruins of the Institute of Egypt. French scholars had founded the Institute after Napoleon Bonaparte’s invasion in 1798; its archives held centuries-old maps, books and manuscripts—a priceless treasure. But in December 2011, when government forces on nearby rooftops shot at demonstrators in the street, protesters retaliated by throwing firebombs at the soldiers. Some of the projectiles fell short; the resultant fire destroyed most of the building and much of the collection. In January 2012, Sami told me, Muslim and Christian volunteers collaborated in salvaging charred volumes from the ruins.

But what lingered in my mind was the assessment published in the Arabic-language newspaper al-Ahram by the Egyptian poet and commentator Kamal ‘Arafah. He compared the destruction of Cairo’s Napoleonic Institute to the ancient burning of the Library of Alexandria and the Mongols’ obliteration of Baghdad’s learning centers in the 13th century. Labeling Egypt’s fire-bombers “Mongols of chaos,” ‘Arafah added, “I felt pain when I saw in the videos and pictures the cries of ‘Allahu akbar’ (Allah is great) and ‘La ilaha illa Allah’ (There is no god except Allah) coming from young men and women while the Institute of Egypt was burning—young men and women who were ignorant of the extent of the loss bleeding from the heart of Egypt.”

When I mentioned ‘Arafah’s commentary to Sami, he said he, too, found disturbing the linkage of religious sloganeering and violence. He reverted to what we had been discussing earlier, Salafist persecution of the Copts: “I’m staying. I’m not leaving my country. I’m not going to do what the Salafists want me to do.” He added that in the aftermath of recent attacks on Christian churches, when he and his Coptic friends assemble for prayer, they have the feeling, “We’re ready to be martyrs. We’re ready to be with Christ, to live with Christ”—not martyrs in any violent sense, he insisted, but in the sense of giving witness.

The Death of Catherine and Barbara

The motif of martyrdom recurred as we drove south to Masr al-Qadima, “Old Cairo,” one of the city’s most ancient neighborhoods and a center of Coptic culture. We visited my favorite church in Old Cairo: al-Kanisa al-Mu‘allaqa, the “Suspended Church,” so called because it was constructed atop the remains of a fortress dating to the Roman Empire.

I knew the place well. As a graduate student of Arabic 30 years ago, I came here on weekends for prayer services and for the pleasure of hearing chanted Coptic, a language that is the linguistic descendant of the tongue of the pharaohs.

Some things were as I remembered: walls with ebony and ivory inlay, worshipers lighting candles before relics and icons of the saints. Vendors by the entrance offered holy cards and painted images of Catherine of Alexandria and Barbara of Heliopolis, saints who were tortured and killed for their faith.

But there was something new: tables in the church courtyard, where men sold copies of two newspapers directed toward a Coptic Christian readership—Nida’ al-watan (“An Appeal to the Nation”) and al-Katiba al-Tibiya(“The Theban Legion”). Nida’ al-watan featured a front-page red-lettered headline: “In memory of the Maspero Martyrs—who ran over and killed innocent Copts?” The question referred to a notorious incident in October 2011, when armored military vehicles rammed and crushed dozens of Christians who had gathered in the Cairo neighborhood of Maspero to protest the burning of Coptic churches. The article referred scornfully to a government inquiry into the Maspero killings that has dragged on inconclusively for months.

Beneath these words was another headline: “The blood of the martyrs cries out from the darkness, and the tears of the Copts will not dry. But our Lord is present.” A photo-montage accompanied this text—a crowd of wailing women at Maspero, horror and shock in their eyes; and the face of Jesus, his head bowed beneath a crown of thorns. Suddenly the distant days of Saints Catherine and Barbara felt very close at hand.

Sami saw me studying the juxtaposed images—Maspero and Christ—and commented, “They’re side by side because the two are similar.”

The Theban Legion newspaper also was forthright in addressing contemporary religious and political issues that Copts must confront. A front-page article reported on the frustration felt by Christians and liberal-minded Muslims at the results of Egyptian parliamentary elections, which have brought to power Islamist and Salafist parties.

The article, by a priest named Matthias Nasr Minquriyus, asserts that this frustration does not stem from the prospect of political domination by Muslims, “since, after all, this has been the situation for some fourteen centuries” (an acknowledgment of an enduring political reality: Egypt has been under Muslim control, aside from relatively brief intervals of French and British rule, since the Arab conquest in the seventh century).

Rather, writes Father Minquriyus, Christians and liberal Muslims fear the destruction of “what remains of the Egyptian identity of Egypt” because of the emergent entente between the local “radical extremist current” and “foreign Wahhabi ideology, which is imported from a region from which we are separated by only a body of water that can easily be traversed” (the writer is referring to Saudi Arabia, on the eastern shore of the Red Sea).

Another Theban Legion article warned of the Salafists’ goal to “transform the so-called ‘Arab Nation’ into the ‘United Islamic States,’ whereby Egypt will become merely one province among many which will be governed entirely by a caliph who rules via Allah’s shari’ah.”

This concern about the loss of Egypt’s identity is reflected in the Theban Legion’s Web site (katibatibia.com). The site explains that the newspaper borrows its name from a revered third-century band of martyrs, an Egyptian military unit that refused to worship the gods of the Roman Empire and chose death rather than surrender its Christian identity.

The Web site articulates two goals in particular. The first is “to offer support for victims, the subjugated, and the oppressed, and to propagate the spirit of giving Christian witness and providing the means for nonviolent struggle.” The second is “to rebuild Christian Coptic identity, by rejecting claims of being part of Arab identity, and by developing Egyptian cultural awareness.”

The Theban Legion rejects Arab identity—a relatively recent importation that is a “mere” 14 centuries old—in favor of a much more ancient pharaonic tradition that dates to the fourth millennium before Christ. The Theban Legion newspaper I bought had a cultural heritage page featuring illustrations of both Christian icons and a jeweled scarab-god talisman from the tomb of Tutankhamun.

In recent months Copts have also asserted their ancient Egyptian heritage in public protests. Marchers commemorating Copts killed in clashes since the revolution’s onset staged a demonstration near the Coptic cathedral in Cairo’s Abbasiya neighborhood. The demonstrators bore aloft large Christian crosses but also wore “pharaonic-style” gowns ornamented with ankhs (hieroglyphic symbols of eternal life). And in January 2012, marchers in Tahrir Square carried a replica of a giant obelisk—another survival from Egypt’s past—on the capstone of which was inscribed: “Dedicated to the souls of the martyrs of the Maspero Youth Coalition and the Theban Legion.”

Such symbolism offers a reply to those Salafists who call for Islamist government and the subordination of Copts or their expulsion from Egypt. My driver put it this way: “We’ve been here forever. We’re true Egyptians. We belong here.”

David Pinaultis a professor of religious studies at Santa Clara University. Among his publications are articles on the status of Christians and other non-Muslims in Pakistan, Yemen and Indonesia. His most recent book is Notes from the Fortune-Telling Parrot: Islam and the Struggle for Religious Pluralism in Pakistan (Equinox, 2008).