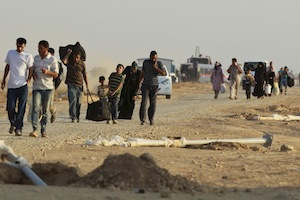 According to the Syrian novelist Dima Wannous, the seed of Syria’s Arab Spring revolt was planted in Damascus in February 2011. A policeman insulted a shop owner, and a crowd of young workers and traders formed chanting, “The Syrian people cannot be humiliated.” The interior minister arrived to scold the crowd: “Shame on you. This is a demonstration!” He had no idea, says Wannous, that “demonstration would become revolution.” As a result, Syria, once ruled by a clique, is faced with a demand for a free society.

In the 21 months of conflict, Syria has not followed the pattern of the Arab Spring, replacing a dictator with incipient structures of democracy. President Bashar al-Assad has repeated the policy of his father, Hafez al-Assad, who in 1982 crushed a Sunni insurgency by destroying the city of Hama.

The statistics shock. An estimated 40,000 people have died. At least 2.5 million Syrians are displaced and a half million have fled into neighboring countries. The shelling of cities has rendered 1.5 million homeless. The government imagines this will make the people submit.

Proposed solutions extend from greater use of force—arm the opposition, assist it with air support or create no-fly zones—to more intensive diplomacy. The justification for outside intervention has several sources: the United Nations itself; Catholic just war theory shared by secular governments; the emerging principle of the responsibility to protect.

The opposition has been divided. The Syrian National Council, which includes the Muslim Brotherhood, is headquartered in Istanbul. Disparate rebel groups receive help from Turkey, Saudi Arabia and Qatar. Salafis, extreme Sunni Muslims, belong to several rebel groups. Western powers, especially the United States, remain hesitant to better equip the resistance, aware that advanced weapons might ultimately fall into the hands of extremists. The Italian Catholic Community of Sant’Egidio, which has a history of peacemaking, met in July in Rome with opposition Islamists, leftists, secular democrats and Kurds. They have called upon the Free Syrian Army to rethink its strategy and return to the pursuit of a political solution to the conflict.

A military intervention, even one embraced multilaterally, seems hard to rationalize according to just war principles: noncombatants will surely be endangered; even greater disorder threatens; and a successful outcome is hard to perceive. Though the death toll now seems horrific, President Assad has promised to deploy chemical weapons should an international coalition appear to join sides with the Free Syrian Army.

This does not mean, however, that the international community can reside on the sidelines of the horror. Not intervening similarly offers a litany of potential noxious outcomes. Under the doctrine of responsibililty to protect, in fact, the international community has a moral obligation to respond when sovereign entities exhibit such a complete disregard for the lives and well-being of their own people. How then to proceed?

In a statement in July, the Syrians who convened with Sant’Egidio in Rome declared: “We cannot accept Syria being transformed into a theatre of regional and international conflict. We believe the international community has the strength and the necessary ability to find a consensus that would be the basis of a political solution... a real global negotiation that excludes no one and a process that would be completed with real national reconciliation based on justice.” These are nonviolent words worth hearing as the Syrian civil war hangs in bloody irresolution, seemingly on the verge, as winter approaches, of spiraling into something even worse.

In the gloom of this war, even with the option of direct military intervention properly off the table, there remain opportunities for active interventions by the United States and other global powers, particularly Syria’s patron, Russia, that can even at this late moment snatch a diplomatic victory from the jaws of this ongoing defeat for humanity. With the right pressure, creative proposals and determined, persistent diplomacy, President Assad may still be made to see reason and assent to a cease-fire that can reboot a process toward a political settlement that could establish the foundation of a long-term regional peace.

All options should remain open, including allowing Assad to remain, albeit in an altered capacity, and even proposals that consider redrawing the colonial boundaries of Syria to better represent the Alawite and Sunni, Christian and Kurd populations. The peacemakers must use every means to convince President Assad and the members of the international community, who are now ready to throw up their hands in frustration, that the whole world loses if Syria dies.

Show Comments (
3
)
Comments are automatically closed two weeks after an article's initial publication. See our comments policy for more.
Clint HYER
7 years 7 months ago
Given recent history what choice does President Bashar al-Assad have except to "hang on?"

Once he lets go of power he will be arrested,convicted and jailed or executed for war crimes.

Christopher Rushlau
7 years 7 months ago
"Under the doctrine of responsibililty to protect, in fact, the international community has a moral obligation to respond when sovereign entities exhibit such a complete disregard for the lives and well-being of their own people."
Your failure to mention Israel, the racist genocidal entity in Palestine, supports the interpretation of your claim, quoted just above here, as exonerating the Jews in Palestine because the Palestinians (including Palestinian Jews-there are some!) are not the Jews' "own people".  Your first sentence in this editorial should have been, if we as US citizens want our national leaders to help bring peace to Syria, we must first demand our leaders demonstrate "clean hands".  Your editorial today, in fact, might be an act of shame at the US (along with Canada and some islands in the Pacific Ocean) voting against giving a Palestinian entity a seat in the UN.
Peace-making deals in overlooked particulars.  The "something worse" that Syria could "spiral into", I'll bet we agree, is Assad stamping out the rebellion, which would be a grave temptation to not reform.
But what does "reform" mean?  Make a treaty with Israel congratulating it on almost wiping out the Palestinian people?  Giving friends of Israel more means to weaken Syrian opposition to Israeli genocidal racism?
There is a cartoon on Al Jazeera this week, and Al Jazeera is the mouthpiece of the Emir of Qatar who is aiding the rebels with weaponry and "diplomatic cover" in his news service, remember.  He also, by the way, overthrew his own father to seize the throne, come to think of it.  The cartoon showed Assad wearing a crown that had slipped down over his eyes.  That reflects my interpretation of the man.  He was not the chosen successor.  He is a physician.  His siblings were killed off, and he accepted the crown.  He is apparently drowning administratively in the meshes of the draconian security services and associated corruption.  I also hold out an expectation that Israeli snipers helped push the civil demonstrations into armed confrontations, one video in particular showing a gunman of such calcuation as to notice the camera on him across the street, turn, and methodically, as if he were at the shooting gallery, shoot the cameraman as the camera "rolled".  There was something very Israeli in his gestures and body language.  But Assad should have learned a lot about his people in general and those in government, enough to equip him to really take charge.  This might put him in contrast to Obama.  "Where there's a will, there's a way."
Let us be real.  The rebellion seems to be fizzling out, and attempts at a civil solution are mounting.  Let us address our concerns for Syria to Syrians, including Assad, with the expectation that they can work things out without our dirty hands, or, for that matter, clean hands except as such equip us to grasp and offer the remedies of equity: to make happen what should have happened.  First here would be a commitment to Syria to not help Israel exercise its genocidal rage against Syria.  Associated in this question is Hezbullah in Lebanon.  The Shiites of Lebanon are the majority by themselves, says Noam Chomsky, but the constitutional arrangement there guarantees the tiny Christian minority at least a veto over all government activity.  Result-stalemate, leaving Hezbullah to be the sole functioning government albeit outside of government-although its political wing is also, finally, and in amusing contrast to the electoral laws, the foundation of the present premiership of Miqati.  Yet, again, Hezbullah is a target of the US as proxy for Israel, which sees Hezbullah as the actual strength of Lebanon and thus a threat to Israel's genocidal rage.  We should not expect our advice for Syria to include cutting off its support for Hezbullah.  Between Hezbullah and Iran, these two are the strongest elements of democracy in the region.  Consult polling on the legitimacy of the last Iranian electoral outcome.  As such these two, and Syria as their Sunni-majority ally, are both the bulwark of popular resistance to Israeli genocidal racism and the formal reminder that democracy works-while Israel's "curious institution" is leading it from disaster to disaster.
And who could forget Egypt?  I could.  As Morsi sweeps out Mubarak's judges who were fighting a rearguard action for a despotism even these judges should have judged could never return, Israel is facing its nemesis to the west: democracy.  Let us help it face that nemesis on its other frontiers as well, and internally.
As Nietzsche said, we're Christians . . . ? . . . we should act more redeemed!  What would the Son of God do here?  He would not shrink in the feeling, "Who am I to be brilliant, gorgeous, talented, and fabulous?"
Carlos Orozco
7 years 7 months ago
Where were the R2P proponents a couple of weeks ago when Israel bombed empoverished Gaza at pleasure? Once again, the international Israeli lobby made everybody look the other way, continuing decades of intolerable abuse against the peolple of Palestine.

But enthusiasts of globalist intevention are not shy in the case of Syrian. Everything goes. The Obama administration is far from being a passive participant in the conflict: it has been arming and financing Sunni radicals (Al-Qaeda type terrorists) for over a year, via Saudi Arabia and Qatar. Neocons hawks such as Hillary Clinton and Susan Rice can't wait for another war. Syria, is their minds, is an opportunity to weaken the growing Shiite influence in the Middle East, product of the catastrophic consequences of the invasion of Iraq that they prepared with years of anticipation, only to leave Iran as the greatest benificiary.

Be certain of one thing: if "freedom fighters" get their way in Syria, Christians will suffer much more than they after the Iraq war. On a more global scale, Syria seems to be playing the role of Spain during its Civil War just before WWII.
Advertisement

This article also appeared in print, under the headline “Syria’s Late Spring,” in the December 10, 2012, issue.