A Fragile Peace: The hard-won art of Ferdinand Hodler

A Fragile Peace: The hard-won art of Ferdinand Hodler 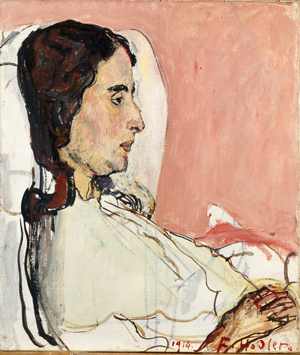 When Fyodor Dostoevsky and his wife visited the Kunstmuseum in Basel, Switzerland, and discovered Hans Holbein the Younger’s “Christ in the Tomb” of 1521, the great novelist was so appalled that he fell into an epileptic fit. Years later, in “The Idiot,” he brought Prince Myshkin before the same painting. “A man’s faith might be ruined by looking at that picture,” says Myshkin—and himself suffers an epileptic fit. The stark, almost life-size horizontal painting of the festering body of Jesus pressed within the narrow confines of his grave is a unique presentation of Holy Saturday, and the Swiss painter Ferdinand Hodler, another pilgrim to Basel in 1875 to study the Holbeins, was likewise overcome by it. (So was I, on first seeing it over 50 years ago.)

Hodler was born in Berne, the eldest of the six children of a carpenter and a woman from a peasant family. By the time he was eight his father and two brothers had died of tuberculosis. His mother remarried, but soon succumbed to the same disease, as did his remaining siblings. “In my family, death was everywhere,” the young artist later said. Later the Holbein haunted him.

After being apprenticed to a painter in Thun under whom he learned to make conventional landscapes for tourists, Hodler determined to find a larger world and in 1871, without knowing a word of French, set off by foot for Geneva, then Switzerland’s art center. There he was fortunate to be accepted for study from 1872 to 1877 under Barthélemy Menn. Menn introduced him to personal landscapes and plein-air painting and schooled him in exact observation and drawing. Hodler also adopted Menn’s concept of parallelism, which emphasized formal repetition and symmetry as revealing the order and harmony of creation.

After a year in Madrid (1878) studying the masters at the Prado (as had Manet and Eakins shortly before him), Hodler continued to concentrate on romantically realistic landscape. He achieved some original work using Albrecht Dürer’s method of subdividing the picture plane in squares for the sake of stronger composition and also by adopting a lighter palette. But his real breakthrough came in 1889-90 when, capitalizing on his Symbolist interests, he painted his first great canvas, “The Night,” which shows a muscular young naked man, surrounded by six other nude figures, being suddenly awakened by a black figure looming over him. (It was a scandal in Geneva and a huge success in Paris.) At the end of the decade he won the competition for the murals of the Swiss National Museum in Zurich, for which he produced his large historical fresco “The Retreat from Marignano of 1515.” He was also successful with character studies such as “The Halberdier” and, later, “The Woodcutter,” now prized works in the Dallas Museum of Art and the Musée d’Orsay, respectively. By 1904 he was so widely admired that Gustav Klimt invited him to be the Guest of Honor at the Fourth Vienna Secession exhibition.

This is roughly the point at which a gem of an exhibition, “Ferdinand Hodler: View to Infinity,” at that gem of a museum, Neue Galerie in New York City, begins. In “Study for Day” (1899), for which his wife Berthe served as the model, the nervous line, taut limbs and strained nudity point towards Egon Schiele. Especially typical for the last decades of the artist’s life are the monumental frieze-like processions of female figures, entitled “Feeling” (1905, 1911, 1912) and painted in predominantly red or blue tones. (Red for Hodler connoted passion, blue spiritual transcendence.) The same gallery exhibits side by side, perhaps for the first time since their creation, three over life-size portraits of women wearing deep red robes and moving in cheerful abandon or ecstasy—modern versions of Michelangelo’s Sibyls.

In the central second floor gallery where Klimt’s portrait of Adele Bloch- Bauer (1907) holds court, the show’s curator, Jill Lloyd, has skillfully introduced three studies of women: a Symbolist piece, “The Holy Hour” (1904), that surprisingly evokes both Jean-François Millet and Andrew Wyeth, and then portraits of the sisters Gertrud Dübi-Müller (1911) and Emma Schmidt Müller (1915), their elegantly elongated figures each sitting precariously on the edge of their seats. Dübi-Müller had developed an avid interest in photography, and a fascinating suite of her work shows Hodler in a stirring range of activities—painting Emma, playing a drum, raking a bonfire, climbing a glacier, posing with Berthe and their adopted daughter Paulette.

Nothing prepares you, though, for the first gallery at the top of stairs on the third floor. Here there is an unprecedented series of drawings and oils documenting—no less clinical a word fits—the course of the lung cancer that finally took the life of Hodler’s mistress and muse Valentine Godé-Darel. They had met in 1908, and he thought the 20-years-younger Parisian like “a Byzantine Empress in the mosaics of Ravenna.” With unflinching candor, he drew the onset of the cancer in 1913 and then her increasing weakness, including heart-breaking sheets that show her holding their newly-born daughter Paulette. A detailed sheet of the ravaged woman on her deathbed, dressed fully and holding a rosary, is Holbein revisited.

Some surcease comes in the next gallery, with a mix of handsome late landscapes and intense self-portraits. The landscapes are now reduced to their essentials, elementally trumpeting the splendor of the great peaks of the Swiss Alps. The self-portraits, one of the finest series of such work, range through moods of self-scrutiny, surprise and saucy bonhomie, showing Hodler at whatever age it pleased him to present himself.

And then in a small gallery hung in deep purple velvet, with Arvo Pärt’s Berlin Mass playing in the background, you come again to Valentine’s deathbed (see picture above). To the left is a drawing of the death of an earlier lover, Augustine Dupin, and a virile self-portrait of Hodler at 47. In the center lies Valentine, her position reversed from the earlier drawing, here the image of death in all its terrible finality. To the right, though, are three ravishing sunsets over Lake Geneva, as seen from Lausanne, painted shortly before the woman died. I doubt that peace and loss are anywhere in New York currently closer than this.

Devastated though he was, Hodler went on painting, indeed furiously so. Increasingly introspective self-portraits multiplied. So did studies for the five versions of his great project, “View to Infinity,” a mural commissioned for the stairwell of the art museum in Zurich that he worked on from 1907 to 1918. Neue Galerie shows seven tall individual figure studies in simple, flowing blue gowns, including one for which Gertrud Dübi-Müller was the model. The immense final canvas would have five figures in all, with the suggestion that these women in added numbers could lead us forward endlessly.

But you feel Hodler’s fragile, hard-won peace most of all in the increasingly luminous, pared-down landscapes, especially those featuring Mont Blanc. “View onto Lake Geneva” (c. 1915) from the Kunstmuseum Winterthur shimmers like a Rothko. “Lake Geneva with Mont Blanc in the Early Morning,” in a version from 1917, is layered in vibrant bands of blue exclusively. It practically sings. “Blue is my favorite color,” said Hodler. “Blue, you see, is the color we can most easily bear in great expanses.” At the same time, he could reprise the Fauve palette, as in “Sunset at Lake Geneva from Caux” (1917).

In these late works Hodler was seeking to create what he called paysages planétaires, planetary or cosmic landscapes. He ended—though with a surer touch and a truly modern sensibility—where he had begun: in awe before the majesty of creation, and blessed by it. He was thus in many ways a forerunner of today’s “spiritual but not religious” person. Yet the religious questions remain: how lasting is love between human beings? How final is death? Is the infinite a temporal concept or is eternity a transcendence of time? The young man from Berne indeed found a larger world and became an important artist, now increasingly admired. That his vision raises questions he himself chose to leave open must be enough for us.

This article also appeared in print, under the headline “A Fragile Peace,” in the November 26, 2012, issue.

Leo J. O'Donovan, S.J., is president emeritus at Georgetown University. “Ferdinand Hodler: View to Infinity” remains at Neue Galerie through January 7, 2013, after which it travels to the Foundation Beyeler in Basel from January 27 to May 5, 2013.