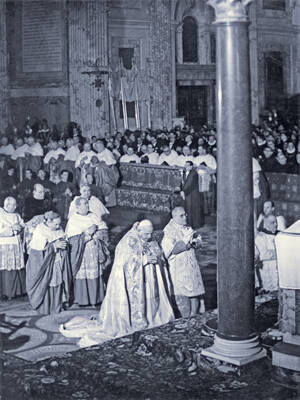 The ecumenical council was among the most significant events of the 20th century. To call it simply “Vatican II” is not sufficient. The complex purpose was to celebrate a true ecumenical council. Thus we are referring not only to a Catholic event, but also to one with great ecumenical and worldwide repercussions. Its significance extended well beyond the Christian churches to reach, as was the custom of good Pope John XXIII, all people of good will.

We must contemplate with admiration Pope John in the Basilica of St. Paul Outside the Walls on Jan. 25, the feast of the Conversion of Saint Paul. There in 1959 the now “blessed” pope convened the Roman Synod and convoked the ecumenical council. His choice of this feast to convene a council revealed his hope of opening a path leading to conversion for the church.

Resistance to the Spirit

Blessed John XXIII’s hope for a council was a real inspiration of the Holy Spirit. That inspiration brought hope to the church and to the whole world. Today we can sincerely affirm that the assimilation of his message is not yet complete. Fifty years after the opening of the council, many who know about it have not yet implemented it or read its documents or understood it.

It is also true that many have sought to erase its memory because the challenges the council set before us, and continues to set before us, are rather uncomfortable for some structures and persons.

“The new Pentecost” convened by Blessed John XXIII opened, and still opens, the doors and windows of a church in which more than a few pastors and laypeople suffer the temptation to close themselves off in a cell that is secure or full of prestige and comfort, little disposed to listen to the anguish and hopes of this world.

Upon becoming the pilot of Peter’s barque as its “pastor and guide, navigator and admiral,” John XXIII found the church walled up in a holy city with a very European mentality and too centered in Rome. He was “provoked” by the Spirit of God and by internal and external ferments that caused some discomfort.

Painfully, the comments of the bishops about the new council, gathered in 1959 and 1960, revealed that the ecclesiastical hierarchy had not yet taken the pulse of their world. They considered many of the subjects “foreign” to the mission of the church. Pope John himself did not think that way. He was ready to listen to the voice of renewal and dialogue so that the church might become an apostolic, missionary, servant church. The surprise of the entire world was enormous as he announced that it was necessary to open the doors and windows of the church and to renew the missionary commitment of the baptized. No less a surprise was the affirmation of the universal call to holiness for everyone.

In the prayer to prepare the council, the pope spoke clearly of “a new Pentecost.” It was to be an ecumenical council marked by dialogue, openness, reconciliation and unity. All were convened, all included, all responsible, all holy, all missionaries.

Celebrating With the People of God

In Saint Peter’s Square on the morning of Oct. 11, 1962, some 2,500 bishops, in procession and singing the Litany of the Saints, marched toward the basilica. They were accompanied by the ringing of bells in all the churches of urban Rome.

As the 20th-century council opened, a new epoch began for the church. A new church appeared in the old and majestic Basilica of Saint Peter. General enthusiasm was evident, though the indifference of some was not absent.

In his inaugural discourse, Pope John XXIII surprised everyone. With great simplicity he began, “Mother Church is happy and exults with joy.” He had begun to dispel fears and reservations and to allow all to be filled with the joy of the Spirit.

Then the pope responded directly to critics of the council. “We have a completely different opinion,” he said, “than those prophets of unhappiness, who constantly predict disgrace, as if the world were about to perish. In the current state of human affairs, through which humanity seems to be entering into a new order, we should recognize instead a hidden plan of divine providence.”

Defining the task of the council and the mission of the church, Pope John affirmed that it was necessary to consider the legacy of 20 centuries of Christianity as something that, beyond all the controversies, had become the common patrimony of humanity. Therefore, he said, we are not talking about continuing to be trapped by the old. Rather we should with joy and hope, and without fear or reserve, move forward with the work required by our time and our Lord Jesus Christ. Already in the bull that convened the council and later in the encyclical “Pacem in Terris,” the pope referred to the signs of the times and to the duty to interpret them with discernment. In this way John XXIII re-established the prophetic task of the church in the heart of history.

That day concluded with the pope’s famous improvised discourse before 100,000 people gathered with torches in Saint Peter’s Square. This spontaneous celebration called to memory the popular acclamation at the Council of Ephesus, where the bishops’ definition of Mary as Mother of God was received with acclamation by the people.It was also a clear image of the church as the people of God. The people of God, including the children, were present for all to see on the first day of the council.

The pope’s simple and fatherly words revealed that he was not vindicating primates, infallibilities or privileges, not even before his brother bishops meeting in council, nor before any other persons. Rather he was inviting all to be happy and hopeful because God the Father has looked upon us; we have been anointed by God the Holy Spirit and sent forth by God the Son.

This article is also available in Spanish.

Cardinal Oscar Andrés Rodríguez Maradiaga, S.D.B., is the archbishop of Tegucigalpa, Honduras, and president of Caritas Internationalis. This article, excerpted from a longer text, was translated from the Spanish by Mr. Mario J. Paredes, presidential liaison, Roman Catholic ministries, at the American Bible Society.

Show Comments (
1
)
Comments are automatically closed two weeks after an article's initial publication. See our comments policy for more.
Robert O'Connell
9 years 7 months ago
Gracias:  To me, an essential element of Vatican II is that we were all invited "to be happy and hopeful because God the Father has looked upon us; we have been anointed by God the Holy Spirit and sent forth by God the Son."

My prayer is that we do our part, humbly and in unity, but also energatically.