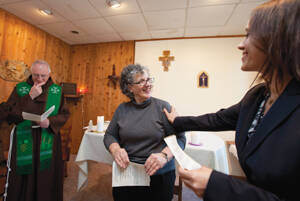 Two fundamental questions must be raised when we consider the impact of the Second Vatican Council (1962-65) on the life of the church. First, what is the main legacy of the council—that is, what teachings have been particularly meaningful for us in different parts of the world? Second, what are the tasks and challenges ahead?

I had the privilege of being in Rome during the last two years of the council, as a student from 1964 to 1966 in the licentiate program of theological studies at the Pontifical Urbaniana University. I was immersed in and breathed, so to speak, the special atmosphere of those years in Rome. With hundreds of bishops coming from all over the world, the church seemed truly present in all the nations. Ordained a priest by Pope Paul VI in January 1966, only one month after the council’s closing ceremony, I consider myself a child of Vatican II. I grew both as a priest and as a bishop in the light of the legacy and the teaching of the council.

When I think about the multiform and precious treasures inherited from the council, one of the first things that comes to mind is the profound renewal in understanding of the mission of the church in the world. Coming from China, a nation from the “mission territories,” I can deeply appreciate the council’s innovative contribution to the idea of mission, expressed mainly through the “Decree on the Church’s Missionary Activity” (equally important are the “Pastoral Constitution on the Church in the Modern World” and the “Dogmatic Constitution on the Church”). Recently I learned that Professor Joseph Ratzinger was one of the theologians who contributed significantly to the writing of the missionary decree. He was especially instrumental in overcoming the narrowness of the traditional concepts about the purpose of mission: the salvation of souls and the founding of the church (plantatio ecclesiae).

The decree on missionary activity taught us that mission is not merely an activity engaged in by foreign missionaries, but rather an action rooted in the love of God for the world. The council fathers described mission in all its theological dignity as the mission of the Trinity, a realization of love of the Father, the Son and the Holy Spirit. The same church, the people of God living in the Trinity, is a missionary people by its very nature. So we are not only the recipients of evangelization, but missionaries as well. What a magnificent vision and inspiring new perspective! Each one of us and each Christian community, no matter how small or remote, is blessed with the same dignity and shares the same mission of the Trinity. The church is the people of God, a community of persons, dignified as disciples of Jesus and as children of God. And the church exists for its mission.

Inculturation and Dialogue. From the great rediscovery of the mission of the church, the council drew new tasks and challenges that are most timely and significant for people like me, coming from a place culturally and geographically so distant from Rome. The council affirmed the necessity for the inculturation of the Gospel, for dialogue among believers from different religions and for sharing in the lives of our brothers and sisters. The word inculturation might not appear in the council documents, but the fathers reaffirmed the importance of a creative relationship between the Gospel and culture. Even though the phrase “dialogue among believers” might not be in the texts, the council had the courage to affirm the principle of religious freedom and to affirm the existence of true and holy elements present in non-Christian world religions. These are significant steps forward. During the council Pope Paul VI wrote his first encyclical dedicated precisely to dialogue (“Ecclesiam Suam,” 1964), introducing both the term and the practice of dialogue into the life of the church.

About dialogue, I am also grateful to the council for calling all believers in Christ to move in the direction of unity. Vatican II was truly ecumenical because the popes of the council, both John XXIII and Paul VI, called members of other Christian ecclesial communities to assist and observe at the council. This gave great impetus to the ecumenical movement. As a diocesan priest in Hong Kong from the 1970s to the 1990s, I was asked to lead both the ecumenical and interreligious dialogue commissions in the diocese. These tasks are still very important in the daily life of our society. The council was my guide.

Evangelization, a Task for All

The council gave us new and demanding tasks, not fabricated solutions easily achievable in a short span of time. Fifty years is a long time, but in no way have those years exhausted the treasures we have inherited from the council. The calls of the council set our tasks for mission today. The great vision—that the church exists for its mission of evangelization—has to be translated into a greater awareness that all members of the people of God should participate. Sometimes I feel that the church still relies too much on the role of the ordained ministers, when all the baptized have a unique role to play in announcing the Gospel to all nations. I can see it from my experience in Hong Kong. Every year we are blessed with around 3,500 adults newly baptized at the Easter Vigil. This is not due solely to the efforts of priests, sisters or missionaries, but also a result of the joint efforts of lay Catholics. In our diocese, more than 1,000 volunteer catechists take seriously the task of evangelization.

In the last 50 years, the church and its mission have been blessed with the tremendous participation of men and women from all walks of life. Still, the church should make greater effort to promote the participation of all Christians, and, I would say, particularly of women. The First Vatican Council emphasized the papacy; Vatican II moved on to the importance of the college of bishops. It might be time to take further steps. The universal church must promote and elevate the participation of all the baptized, including the youth with their many precious gifts, in the mission of the church.

Cardinal John Tong is the bishop of Hong Kong.

Show Comments (
1
)
Comments are automatically closed two weeks after an article's initial publication. See our comments policy for more.
Robert O'Connell
9 years 7 months ago
Thank you Cardinal Tong: This article expresses the same thoughts that capture me as I look back on Vatican II.  I would add only that by coincidence or design, the Council also made sure we took a new look at our relationship with our Jewish brothers and sisters.

Yes, "The council gave us new and demanding tasks, not fabricated solutions . . . " and we " must promote and elevate the participation of all the baptized, including the youth with their many precious gifts, in the mission of the church." Willing souls, inspired by the Holy Spirit, are doing God's work.  I, for one, happily celebrate the Church we live in.