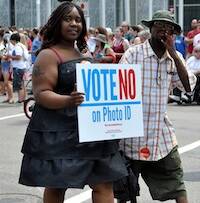 Over the past 12 years, Americans have cast hundreds of millions of votes in local, state and national elections. Did you know that in this same time period there have been only 10 alleged cases of in-person voter impersonation? This might surprise you if you have followed the recent flurry of legislative activity to require voters to present state-issued I.D. cards when casting their ballots. Since 2010, more than 30 states have considered more restrictive rules for when and how people can vote.

Litigation is now going on at the state and federal level to challenge some of these new rules. Cases are expected to reach the U.S. Supreme Court before the November election. In Minnesota voters will decide on a constitutional amendment that would require a state-issued photo I.D. with a current address in order to vote.

Advocates of the new laws claim that voter fraud is widespread and that tougher restrictions will help improve the validity of the electoral process. But the specific type of fraud addressed by the new I.D. laws, in-person voter impersonation, is virtually nonexistent. In supporting the new laws, the Republican National Lawyers Association cites 375 cases of election fraud. News21, a Carnegie-Knight investigative reporting project, examined these cases and found that only 33 resulted in convictions or guilty pleas and none involved in-person voter impersonation. It is simply not worth the risk (up to five years in prison and a $10,000 fine) to cast one fraudulent vote. Electoral fraud of other kinds is much more common: absentee ballot fraud and the deliberate miscounting of ballots, for instance. The current wave of voter I.D. laws does not address these legitimate concerns.

It is commonly believed that “everyone already has a state-issued I.D.” But research indicates there are millions of eligible voters who do not possess the requisite form of identification in states that have passed more restrictive voter I.D. laws. In Pennsylvania more than 750,000 people, 9.2 percent of the state’s voters; in Wisconsin more than 300,000 registered voters; in Texas 8 percent of white voters and 25 percent of black voters. Not having an I.D. card is often related to age, race and economic status.

Legal precedent requires states to offer free I.D. cards for voting, but other legal documents like certified birth certificates or marriage licenses—which cost between $8 and $25—are usually required to obtain the I.D. cards. The notorious poll tax prohibited by the 24th Amendment cost only $10.64 in current dollars, according to the Brennan Center for Justice. Attorney General Eric H. Holder Jr. has referred to voter I.D. laws as “poll taxes.” In late August a federal court struck down the Texas voter I.D. law for imposing “strict, unforgiving burdens on the poor.” In some states, the voter I.D. must include a current address. This can create difficulties for students, military personnel, elderly in nursing homes and those who are homeless. Where such laws have withstood legal challenges, states should enact a “grace period” to allow adequate time for citizens to obtain the proper identification.

Catholic social teaching strongly emphasizes that all people of goodwill should participate in civic life and political processes to promote the common good. In Minnesota a faith-based community organization called Isaiah has built a coalition of Jewish, Catholic, Lutheran, Baptist and African-American religious groups to oppose the voter I.D. amendment. The collaboration is inspired by a shared commitment to “the least of our brothers and sisters,” who are disproportionately affected by the new laws.

There are real threats to electoral integrity that should be studied and addressed. Measures are necessary to reduce fraudulent absentee ballots. Polling stations should be carefully monitored so that voters are not unfairly turned away without an opportunity to cast even a provisional ballot. There should be more uniform electoral processes across the 13,000 voting precincts in the United States; Election Day should be a mandatory national holiday to make it easier for people to vote; and there should be a federal constitutional amendment to protect the right to vote for all citizens.

In Minnesota, former Vice President Walter Mondale, a Democrat, and the former governor of the state, Arne Carlson, a Republican, have teamed up to oppose amending their state’s constitution to require voter I.D. They insist that “election laws be designed in a bipartisan fashion,” since no single party should be allowed to create rules for an electoral advantage. We should honor the hard-fought battles for women’s suffrage and civil rights by returning “to a legislative process that studies a problem first and then creates a sensible and affordable bipartisan solution,” as Mondale and Carlson wisely suggest. Reform efforts should bolster, not restrict, democratic participation.

The Editors
Show Comments (
9
)
Comments are automatically closed two weeks after an article's initial publication. See our comments policy for more.
ed gleason
9 years 9 months ago
GOP has alway gotten the majority of absentee ballots. So they vote No ID required to get an absentee ballot.
Absentee ballot is of course the easy, easy one be fraudulent.
This GOP suppression of minority, young &  oldster passing last minute laws requiring a state ID amounts to betrayal of the Constitution , the copy of which they wave at every Tea Party hate rally.. The good news is that this GOP fraud will/is not working.
Robert Sherman
9 years 9 months ago

Voting is a civic responsibility and a priviledge in this country. The real fraud is the large extent that people are unprepared to cast an informed ballot. Society increasingly chooses ignorance preferring to play games on smart phones and computers rather than read newspapers and understand the candidates and issues.

Too many people either do not know or have forgotten the functions of the three branches of federal government, the different powers of the federal vs the state governments or their local governments. If they knew how a bill becomes a law, they have forgotten it. Otherwise they would have insisted that the United States Senate do its job over the last three years. You can't create laws when one house passes one and the other does not. Even if they are different, then conference committees resolve the difference.

Democracy depends on an informed electorate. Election day for President in this country is the first Tuesday in November. Early voting or absentee voting should be restricted to people in the military who are stationed away from their homes. The rest of us need to figure out how to get to our voting places. To do otherwise diminishes the votes of those who did.

The reader comment about voter ID laws is incorrect. In Georgia, minority voting increased after the law went into effect. If people vote by absentee ballot because they are in the military, the signatures on the ballot can be compared, just as they are at in person polling places.

ID should be required where there is first time voting and the local polling place has no prior signature on record. That just makes it fair for the rest of us.

PATRICK SULLIVAN
9 years 9 months ago
Both comments above are good, I LIKE Ed Gleason's, and agree with "ID should be required where there is first time voting and the local polling place has no prior signature on record. That just makes it fair for the rest of us."

Seems there are cases where it is absolutely necessary to provide proper ID, perhaps foto, but not always. Should not be a big deal, 99% already have foto, why not show it?
MICHAEL COLLINS MR/MRS
9 years 9 months ago
Uhhhmmm, if no one is checking anything how do you know there are only 10 cases of fraud? What's wrong with checking IDs? It seems to me that voting is too important a civic duty to not check that the person voting is legitimately authorized to do so.
ed gleason
9 years 9 months ago

Robert S. says "if the local polling place has no prior signature on record.'
As a 10 year polling inspector in Ca I say there is no record of anyones signature at the polling place. I doubt any state has a prior signature on prem. . I have never  heard or seen a fraud... a felony for what? This is entirely a  GOP suppression of pro-Obama votes. Very un-American for these Tea Party constitution wavers.
As for getting a state ID, we have lines of 100 trying to get into the DMV building at 10AM in the morning.

C Walter Mattingly
9 years 9 months ago
The real fraud we know about is voter registration fraud. Just one organizations and its affiliates, the Obama-supported, guided, and paid ACORN, is guilty of literally many thousands of instances of voter registration fraud in 14 different states. In Washington state, ACORN reps were found to have committed the largest instance of voter registration fraud in the state's history. And that is just from one organization, and that is just what has been discovered. How many more out there are there besides these 10 plus thousand that have been adjudicated? Is this just the tip of the iceberg?
Given the corrupt nature of this well-established, Obama-affiliated organization and the proven persistent voter registration fraud of just this one organization over a period of ten years, the integrity fo the voting process is called to question. Photo ID is a reasonable way for the country to regain confidence in our voting system that ACORN has so damaged.
ed gleason
9 years 9 months ago
Walter, you know very well that Photo ID has nothing, nothing nothing to do with registration fraud. I repeat 3 times 'nothing' because you insist on many of your posts to repeat the confusion of registration fraud and voting fraud. This makes your posts a fraud.
C Walter Mattingly
9 years 9 months ago
Ed, it's true that we have many instances of voter registration fraud that have been discovered and very few of voting fraud that have been detected. It is reasonable to assume there are may well be others.  The question is should we use reasonable means to assure that such fraud that exists or has the potential to increase in the future does not occur in the voting process, or should we not? Photo ID is a such a reasonable, effective, and widely employed means of identification used by, for example, banks, grocery stores, and democrats for admission to their caucuses.
For the protection and perceived integrity of our voting process, it's a good idea.
Steve Gibbs
9 years 7 months ago
Involving the both parties in law amendment will be the most admirable amenity. I believe, two minds can build a better idea with no partiality.
hot shot loads