Life with the Lakota: A Jesuit mission on the rez 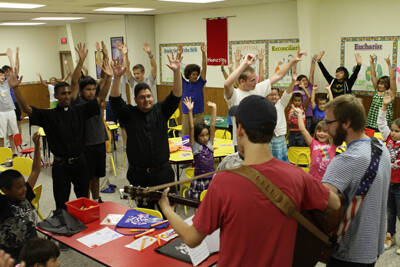 An impressive place to find these people and their stories is at St. Francis Mission. In 1881, Chief Two Strike invited Jesuits here to start a school. A large building went up quickly, financed by St. Katherine Drexel. Churches and other schools followed. St. Francis Mission today includes seven parishes, schools at various levels, a radio station, a museum and cultural center, a dental clinic and two recovery programs. All of these serve the 20,000 Lakota Sioux of the Rosebud Reservation.

The recovery programs address a huge need, as alcohol and drug abuse create much suffering on the reservation. Geraldine Provencial is the director of one of these programs, the Icimani Center, where addicts and their families come to face their personal stories with honesty. The work is tough, but Provencial and her staff are up to the challenge.
Provencial recalls the time in 2008 when she and two others from the Rosebud Reservation went to the Betty Ford Institute in California: “At the very beginning we were going out to see how the program was structured…. I didn’t understand what I was headed for. It was a great experience. I wished I’d had that when I was young.”

After their second trip to the institute, they engaged one of the counselors to come to St. Francis to train the local people in running the program. This training was a very new experience. “I thought, there’s no way I’m going to be standing in front of a group saying these things, standing there and facilitating that,” Provencial said. “But they encouraged native leadership. I’ve really come a long way with St. Francis Mission.” Provencial and her fellow counselors ended up with over 500 hours of training.

The Journey to Recovery

They opened the Icimani Center, where families come to find recovery. It is a long journey; Icimani Ya Waste’ is Lakota for “good journey.” A family focus is part of the original insight of the program. “We started this center because we had no resources that were in support of the family,” Provencial explains. “If there is an addict in the family and he goes to treatment, we need this family at least to…have an idea how to accept him when he comes home…. Family members are caught up in the addiction, so the home situation has to change. But the people don’t know the recovery language, don’t know how to communicate.” Participants from the program say they did not realize how the dysfunction in their homes seemed normal until this program gave them the insight.

The program’s leaders also had to learn to communicate. At first, the program used PowerPoint presentations and technical language to teach about the physiology and chemistry of addiction, but the language did not connect with the local people. To improve communication Provencial and Pat Douglas, S.J., started designing skits to act out the brain and the chemicals and the dynamics of addiction and disease. Program participants took to this very easily and enjoyed learning what they needed to know. The program is an intense four days of instruction, interaction, counseling and support. Participants go home ready for a new healthy life.

Provencial and her team find great satisfaction in their work. “Every program is a dramatic story,” she says. “Just the feedback…the people don’t easily come out and express their most inner feelings or emotions. But then you have them saying things like, ‘It opened my eyes to see we are not alone. I always thought we were alone.’” A woman in a recent program had been ordered by a court to attend; since then she has become sober, made positive changes in her life and continues her recovery. Success stories happen.

Forty-five miles away, Jim Stands runs the White River Recovery Center. His story is one of recovery and then of using that recovery to change the lives of hundreds of others. “Twenty-six years ago our whole family was sick. Since then four…have gotten into recovery,” he quietly admits. “If you can get family members there you can help other people. One addict affects 10 people, so your work is far-reaching, and it’s mostly spiritual.” At the White River Center Stands hosts five 12-step meetings each week, serving alcoholics, drug abusers, gamblers and Al-Anon. He talks with gratitude about John Hatcher, S.J., who is the president of St. Francis Mission. “When Father Hatcher hired me, I said, ‘I’m a good Catholic. And a sober Catholic is a better Catholic.’” Stands has helped many Catholics and others become sober.

Provencial thanks Father Hatcher, too: “I cannot express enough gratitude to Father Hatcher. He made it all happen. He saw the dysfunction and gave us the opportunity to reach out and change it, to take it on our selves and help us bring our program to the reservation.”

Father Hatcher brought new energy to St. Francis when he arrived in 2003. He had already spent 28 years among the Lakota and had recently worked with Bishop Blase Cupich of Rapid City to study the five reservations in the diocese and make recommendations. At St. Francis the priest began to implement the study. Though Jesuits and others had done great work at Rosebud for 125 years, Father Hatcher found no real church community there. The old mission model was not working. Instead, he began to give local people training and responsibility, after which the programs started to flourish.

Besides the recovery programs, a wide range of activities make the most of the people’s talents and interests. Regular pastoral work builds up the faith in six parish communities; many families on the reservation became Catholic generations ago. Religious education is vigorous, and a Nativity-San Miguel model school is being founded. A dental clinic serves the people. A museum celebrates the local heritage, and a language center preserves it for the future. Deacon Ben Black Bear has translated Luke’s Gospel into Lakota and children learn the prayers of the Rosary in this traditional language. The mission is developing a suicide-prevention center in the town of Parmelee, where in a recent two-month period three young people killed themselves.

KINI FM Radio also binds the community together. The manager is Marylee Fast Horse, who came to the station in 2006 with no background in broadcasting. Her first experience at the station was setting up the radio equipment to broadcast Sunday Mass. She went on to volunteer and was later selected as one of 13 participants in a broadcast leadership-training program run by the National Association of Broadcasters in Washington. As the manager, she has transformed the 34-year-old station from a small local voice to the major station in the area. With Fast Horse and her young crew, KINI reaches out to some 60,000 people with news and human interest stories, religious instruction and support for people in recovery, and lots of music and talk in Lakota and English. Many listeners have no other media contact with the larger world, no television, no computers. KINI connects them to their community.

Fast Horse was one of the three from the reservation who went to California for the early explorations with the Betty Ford Clinic, and she is still very involved with the Icimani Recovery Center. She and her husband, “Cowboy,” are also successful ranchers. Through his construction business Cowboy got involved in helping the church.

When the people of the St. Francis Mission tell their stories, they have a lot of numbers to include. These are good numbers: years of sobriety, families that feel healed, teens who find a future, radio audiences brought together. These numbers are a vital part of the story of hope.

Show Comments (
2
)
Comments are automatically closed two weeks after an article's initial publication. See our comments policy for more.
9 years 2 months ago
Many thanks to Fr. Schmidt for such an accurate and thorough description of the many healthy and healing programs sponsored and supported by the Jesuit Fathers/Brothers/Scholastics and dedicated Sisters and lay apostles on the Rosebud Reservation, located at St. Francis Mission in South Dakota. With all the ups and downs, with all the tremendous and pressing needs of the people, the Jesuits are continuing to be pioneer missionaries within our own country. Many blessings.
lennard garnett
8 years 2 months ago
I met a woman that was working at the White River Recovery Center when I was staying at the Midwest Reproductive Center, she told me interesting cases from her work and how the White River Center helped a lot of people to rediscover their inner strength. I`m glad that such center exist and hopefully more of them will appear, our communities need this.