The Art of Being Seen: The Barnes Foundation's new Philadelphia campus

The Art of Being Seen: The Barnes Foundation's new Philadelphia campus 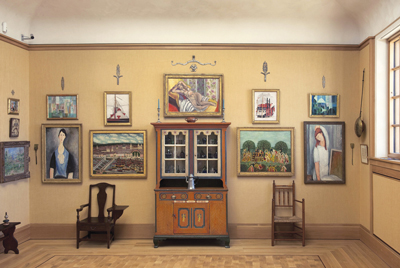 The battle is over and everyone has won: Dr. Albert C. Barnes, whose storied art collection has found a glorious new home despite his strictures against changing it in any way, much less moving it; the citizens of the Philadelphia suburb of Merion, who will no longer have to contend with busloads of tourists on their narrow streets but will still be able to enjoy the arboretum that the Barnes Foundation will maintain there; art lovers in Philadelphia, and soon from all over the world, who will find access to the collection immensely easier. Above all, the art itself is the winner. It has never looked as beautiful, often sublime, as it does now with modern lighting.

Barnes, who was born in Philadelphia in 1872 to a working-class family, graduated at 20 from the University of Pennsylvania School of Medicine. Pursuing his research interests in Germany, he met the scientist Hermann Hille, who returned with him to Philadelphia. Together they invented the silver-based antiseptic Argyrol, which brought them great wealth. Barnes married and moved to Merion, Pa. In 1907 he bought out his business partner and established the A. C. Barnes Company, which he ran until 1929.

In high school Barnes had known William J. Glackens, who later became an artist of the Ashcan School. In 1912 Barnes gave Glackens $20,000 to buy him some “modern paintings” in Paris. Delighted with the results, Barnes began collecting on his own. Ten years later, he established the Barnes Foundation and in 1925 opened its Paul Philippe Cret-designed building in Merion.

Barnes was committed to educating the public to appreciate art. Drawing on lifelong conversations with a friend, the philosopher John Dewey, he devised an approach based not on chronology, nationality, style or genre, but on the formal relationships of light, line, color and space. Barnes hung his collection in “ensembles,” matching paintings with similar formal qualities, on burlap-covered walls studded with iron hinges, hasps and latches and surrounded by Native American and African pieces, colonial Pennsylvania chests and curious desks and chairs. He tinkered with the arrangements until his death in 1951.

The Move From Merion

In 2004, after more than a decade of legal disputes embroiling the Barnes Foundation, a judge ruled that there was an overriding public interest in accepting the support being offered by Philadelphia foundations and philanthropists to move the collection to a new, central-city site where the institution’s primary mission could be better served. The judge stipulated, however, that the art be hung in the same way and in rooms of the same proportions as in the Merion Gallery. Many in the art world thought the project impossible—or indefensible. Some architects refused to compete for the commission, which was won by Tod Williams and Billie Tsien, a New York-based couple known for their warmly detailed minimalism.

Their building—a gallery in a garden, and a garden in a gallery—opened in May. And it is magical. In a park-like setting, with a quiet entrance bordered by a shallow pool, Williams and Tsien have placed in parallel three long rectangular wings: an entrance pavilion (with a garden restaurant on the first floor and a spacious lounge, auditorium, gift shop and coffee bar on the lower level); a large court topped by a translucent light box that cascades reflected light throughout the building; and the collection gallery. (There is also a 4,300-square-foot gallery for temporary exhibitions.) The complex is clad in textured grey-and-gold Negev limestone, set in panels on a stainless steel skin, evoking African kente cloth.

As in Merion, the first room of the gallery faces south and is flooded with light through three high French doors. One is dazzled by the profusion of Renoirs in this room (24 of the foundation’s 181) and Cézannes (16 of 69), along with works by Seurat, Corot, Daumier, Tintoretto, Rousseau and Glackens. But it is the quality of the paintings that most astonishes. Cézanne’s “Boy in a Red Vest” hangs near the haunting “Madame Cézanne With a Green Hat.” One of his largest “Bathers” soars above Renoir’s group portrait of his family. Best of all is the largest and arguably finest of Cézannes’ “Card Players,” celebrating the company of working men. Directly above it, in Seurat’s “Models,” three slender women in various stages of déshabille stand before “Sunday Afternoon on the Island of Grande Jatte.”

To the sides of this main room are 12 other rooms, some quite small, and on the floor above another 10. Illuminated cove ceilings and clerestories add light and make the rooms seem larger. To relax the tight procession of the rooms, the architects have introduced a glass-enclosed three-story garden on one side.

Matisse’s Fauve masterwork, “The Joy of Life,” finally has been rescued. In Merion it was hung on a staircase landing (something to do with turning on the stairs and the turns of the languid bodies in the painting). Now it has an alcove of its own, opposite a balcony from which the visitor can look down to the main room and see Matisse’s “Dance.”

In addition to paintings by Matisse (59) and Picasso (46), you will find Van Gogh, Henri Rousseau, Chaim Soutine and Amedeo Modigliani.

The ensembles may not always persuade: hanging “Models” above “Cardplayers” is less interesting for the triangular pattern in each than it is for the effect of seeing next to each other two great paintings made only a few years apart. Cézanne’s “Rocks and Trees” does not need candlesticks below it to draw your attention to the three resolute trees reaching into the sky. And if you find some of the second-floor rooms as crowded as an attic, look for the eight drawings by Paul Klee.

And just when you’ve gone bleary-eyed before yet another second-rate Renoir filling out the pattern, there appears his “Leaving the Conservatory.”

On my first visit to the new Barnes, the cab driver did not know where it was (2025 Benjamin Franklin Parkway); that will soon change. The United States has a great new museum. Its idiosyncratic genius will become a beacon as beckoning as the light box that crowns it.

If there is such a thing as a hostile takeover in the art world, what happened to the Barnes Foundation is a prime - if not unique - example. Anyone interested to know the complete story should view the film "The Art of the Steal" (Netflix). No matter what the "spin", a takeover is still a takeover. An injustice is still an injustice.

This article also appeared in print, under the headline “The Art of Being Seen,” in the July 16, 2012, issue.