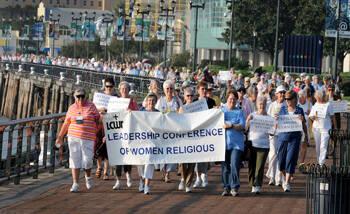 We would be seriously remiss if we published an issue focusing on education without mentioning the extraordinary contributions women religious have made to Catholic education in this country. It is even more important to highlight their contribution in the wake of the “Doctrinal Assessment of the Leadership Conference of Women Religious” just issued by the Congregation for the Doctrine of the Faith, which saddened many religious sisters in the United States by its strong critique. The L.C.W.R. represents over 80 percent of women’s religious congregations in the United States.

Working for meager pay (which they passed on to their communities), women religious have taken the lead in working with people on the margins: not only schoolchildren, but indigent patients in hospitals, the imprisoned in jail cells and the homeless in the inner cities. Not satisfied with works of charity at home, they have labored in fields afar; some have paid with their lives. The martyrdoms in Central and Latin America of Ita Ford and Maura Clarke, Maryknoll Sisters; Dorothy Kazel, an Ursuline nun; and in Brazil of Dorothy Stang, a Sister of Notre Dame de Namur, testify not simply to the Gospel but to a certain kind of woman. These were the women who wholeheartedly embraced the reforms of the Second Vatican Council and the post-conciliar decrees by revisiting the founding documents of their orders and throwing themselves into ministry with the poor, all as the church had asked of them.

Ironically, the C.D.F. assessment was released the same day the Vatican announced that reconciliation talks with the Society of St. Pius X, which rejected many of the reforms of the Second Vatican Council, were proceeding apace.

In the wake of the Vatican’s doctrinal assessment of the Leadership Conference of Women Religious, with many others we offer our support to the sisters. Ten years after the emergence of the sexual abuse crisis, transparency in disciplinary proceedings is more important than ever. Gaps in the public record need to be filled in.

First, there is the history of the assessment. Catholics in the United States and elsewhere are curious about where it came from. How did it originate? Who were the petitioners? Was the U.S. bishops’ conference ever involved or consulted? When and how? When and why and at whose request were Network and the Resource Center for Religious Institutes added to the inquiry?

There is the matter, too, of the selective nature of the inquiry. Have conferences of religious in other countries been criticized for being less vocal and active in their advocacy than their bishops would have liked? Have conferences of religious in other countries also spoken too softly on issues about which the American sisters were allegedly too quiet? Are other institutes and societies, such as personal prelatures and associations of the faithful, under similar scrutiny for their public involvement or lack thereof?

The process should now be an occasion for respectful, candid dialogue. It will be aided by the inclusion of more bishops and other religious, especially those who are canonists, theologians and pastoral ministers. As we wait for more information and for the L.C.W..R.’s formal public statement, we need to calm our hearts. As Bishop Robert N. Lynch of St. Petersburg noted on his blog (“The Nuns’ Story,” April 24), some investigations, like that of American women religious in the 1980s, improved understanding on both sides and strengthened working relationships. Let us pray that may be the case again.

In the wake of the slaughter of 77 people in Norway last summer, questions swirled around the trial of the gunman, Anders Behring Breivik. What twisted ideology prompted him to embark on his rampage? Why didn’t the police act sooner to stop him? One matter was already settled, however: despite the heinous nature of his crime, Breivik will not be executed. In Norway use of the death penalty in peacetime has been outlawed since 1905.

Breivik’s trial began in April; ironically, he has requested that the state put him to death. Yet the citizens of Norway remain firm in their opposition to the death penalty. A poll conducted after the shootings found that only 16 percent of Norwegians were in favor of capital punishment. Meanwhile, Norway’s government has worked against the use of the death penalty beyond its borders. In line with its commitment to international treaties, the government has refused to release Mullah Krekar, an exiled Kurdish leader of an armed Islamist group, to the Iraqi government until that state forswears his execution.

Scandinavian countries are often mocked in American political discourse for their secularist, “socialist” policies. On the issue of the death penalty, Norway has set a moral example that countries with higher rates of religious practice would do well to follow.

The Editors
Show Comments (
6
)
Comments are automatically closed two weeks after an article's initial publication. See our comments policy for more.
Daniel Hayes
10 years 9 months ago
I agree fully. The work of the American Nuns  ,over the past 60 years,has assured that we now have some Faithful left in the vineyards.
DEBORAH TRUITT MS
10 years 9 months ago
Who are we as Catholics if, guided by the Holy Spirit, we are not willing to follow our conscience?  Thank you, America, for your honest and courageous stand.  I stand with you, and the Sisters, 100%.  I am not alone in the laity in feeling this way.  The hierarchy can do as they may, I say, let them sow the wind, and reap the whirlwind.
Peter Schwimer
10 years 9 months ago

Good for you, America.  Lord knows the Jesuits know a thing or three about Vatican "assessments".

C Walter Mattingly
10 years 9 months ago
Why Scandanavian countries are often mocked for secularist policies compared to the US is beyond me. The facts suggest quite the opposite. In Norway's public school system, for instance, all children except those whose parents sspecifically opt out study the faith of the Norwegian Church, a branch of the Lutheran Church, for several years, from about ages 7-10, and then the various faiths of the world from 11-13, 6 full years of religious instruction. (Parenthetically, it is all but impossible to get an elective abortion in Norway after the first trimester.) Comparing the Norwegian public school system to that of the US is comparing an essentially Christian humanist system of education to an agnostic system. Perhaps that is one reason why Norway, with a very high percentage of gun ownership (#11 in the world as opposed to #1 US), had a total of 5 gun killings in 2005 compared to 10,000 or so in the US. They are imbued with faith as children in their public school curriculum and the self-discipline and concern for others faith teaches.
Of course those US parents of inner city children who obtain vouchers also have a chance for a religious educational experience similar to those of Norwegian children.
Mike Evans
10 years 9 months ago
We all need to stand by our sisters. They were our first and best teachers in the faith, often more by example than by word. It is reprehensible that they are being attacked from afar by a curia who is completely out of touch with the realities of faith in the world. This is a watershed moment. Without the huge numbers of dedicated religious, the church in the USA will die.
Leonard Villa
10 years 9 months ago

There is willful blindness on your part if you fail to see that there are and have been problems with the LCWR and the Church's teaching (not to mention Vatican II's teaching) on religious life. There is and has been a naturalistic, secular feminist current which has frankly sounded the death knell for many former vibrant congregations. The enemies of the Church could not have done what these congregations inflicted on themselves.The dispute will be moot in the not too distant future because most of these congregations will simply cease to exist.

The never-ending dialog canard is a tired tactic employed to delay obedience and a decisive answer to challenges to the Church's teaching on religious life and its essence with endless talking like one would do in a political arena: point, counter-point. At some there is the blunt question: are you a Catholic religious? Do you accept the doctrine and discipline of the Catholic Church? Your actions and choices say otherwise. You need to address these decisively. The following standard was once given to the Society:sint ut sunt aut non sint. A free updated interpretation for this situation might be: be as you should be or else cease to be.

There is also the problem of becoming a member of what Scripture refers to as "false brethren" in this case false sisters. This a person holding herself out to be a Catholic religious while at the same time undermining the Church's teaching from within in areas like contraception, abortion, the ordination of women, while promoting wicca, reike, and the like in the service of a political/secular ideology-approach to religious life. For many this ideology has become the religion to which the Catholic Faith must bend.

With respect to FSSPX you should apply the following challenge from the theologian John Lamont:

The first question that the communiqué of the Holy See raises for a theologian is thus: why does the rejection by the FSSPX of a small part of the teachings of Vatican II give rise to a rift between that Society and the Holy See, while the rejection of more numerous and important teachings of Vatican II by other groups in the Church leave these groups in good standing and possessed of full canonical status? Rejection of the authority of Vatican II by the FSSPX cannot be the answer to this question; the FSSPX in fact shows more respect for the authority of Vatican II than most of the religious orders in the Church. Might I add the phrase to the last sentence "allegedly in full communion?"

The Holy Father has rejected the hermaneutic of rupture which has been dominant in our country for many years which posited two Churches: pre-Vatican II (bad) post-Vatican II defined by us (good.) Hence we need a sound hermaneutic showing continuity and correct interpretation. LCWR in my opinion has done more damage to the Church in this country than the FSSPX.