Every Sunday before 9:00 A.M., a long line of cars snakes down a tree-lined road north of Baltimore, Md. In the Chapel of a Carmelite Monastery, a diverse congregation gathers for liturgy. Retired people, women religious, former priests and sisters, young adults with little children and some teenagers choose their seats in circular rows of chairs. A low murmur of voices rises as people greet one another. Little children take turns standing on the air vent on the floor, watching their clothes balloon out.

A tiny bell’s chime calls us to attention, and we often practice a piece of music briefly. We notice the exquisite arrangement of flowers or greens, usually hand-picked from the grounds. The atmosphere becomes quiet and prayerful as one of the Carmelite sisters approaches the podium.

For many years this Carmelite monastery, nestled in a wooded area near a busy highway in Baltimore County, was known to very few people. Yet its history is impressive. Founded in 1790, the Baltimore Carmel was the first community of religious women to be established in the original 13 states. From its beginning in Port Tobacco, in southern Maryland, the monastery moved successively to two locations in Baltimore City before coming to its present location in 1961.

I attended Mass there a few times in the 1960’s and 70’s, but the chapel was uninviting, and the sisters were concealed behind a grate at a right angle to the body of the church. If one wished to give something to the sisters, the donor went to the convent door and put the gift on a turnstile. This was cloistered Carmelite life.

Slowly and successfully, beginning in the late 60’s, this Carmelite community renewed itself in the spirit of the Second Vatican Council. Interior personal renewal came first, and it continues, as the sisters return to the roots of their Carmelite tradition and bring it to flower in a new way.

Today this monastery is well known in Maryland. Its monthly newsletter reaches 4,000 persons, and the number of people who support the monastery monetarily and/or by participating in its prayer and special events grows continually.

What draws me and many others to Carmel now is the fruit of study, prayer and action over a period of 30 years. These Carmelites took the risk of real renewal. They made haste slowly, in accord with their intrinsic nature.

Sister Constance FitzGerald, who has been prioress several times during this period of change, led her sisters to a new vision of Carmelite life. Unchanged is the center of their life: prayer. Prayer is continually deepened and enhanced with new insights from contemporary theology and Scripture scholarship. Flowing from this prayer is new activity, in which sisters share the fruits of their contemplative life. Each sister increased her personal, spiritual assets by education, both formal and informal.

Sister Colette Ackerman and Sister Robin Stratton enrolled in degree programs in nearby colleges. All participated in educational programs in theology, psychology, spirituality and Scripture, taught largely though not exclusively within the monastery.

About 10 years ago, the sisters established a Festival of Learning—a yearly weeklong program of education for themselves. With the care usually associated with preparations for an audience of hundreds, these sisters chose a theme and invited guest lecturers. The dialogue of the community with such lecturers is refreshing. Also, these guests act as catalysts to increase the intellectual and spiritual interaction of the sisters. Deeper knowledge of and respect for one another is one important outcome.

The community decided that it would support itself in ways that were all related to prayer. Sisters become known as spiritual directors, using new psychological skills along with their own experience of God and the Carmelite prayer tradition. Guest quarters became available for private or directed retreats. Retreatants are invited to the liturgy of the hours and the Eucharist. The “loft,” a room over the chapel, is available for one-day private retreats.

In a more intentional way than in the past, the sisters continued the ministry of the door, receiving people with warm hospitality, and the ministry of the telephone. To make this telephone ministry possible, each sister has a phone, an extension number and a message recorder. In this way, the sisters are available except at prayer and meal times or on hermit days or retreat time. This use of technology also increases the silence of the house, so important to a contemplative vocation. Neither call bells nor public paging ordinarily intrudes on the silence of the monastery.

Most prayer ministry takes place within the walls of the monastery. Occasionally Sister Constance FitzGerald lectures outside the monastery, as a member of the Carmelite Forum. Other sisters from time to time answer calls to share their contemplative prayer and life with others. Sisters Constance, Robin Stratton, Colette Ackerman, and Barbara Jean La Rochester reach beyond Baltimore by writing articles for such journals as Review for Religious, Spiritual Life, The Way and Spiritus and for collections published by Paulist Press, HarperCollins and I.C.S. Publications. These writings interpret the mystical tradition of John of the Cross, Teresa of Avila, Thérèse of Lisieux and Edith Stein in a contemporary way and thus make this tradition available to others.

The monastery’s ministry to children demands special talents. Sisters Patricia McEvoy and Monica Bies plan and present a program of spirituality for boys and girls from ages 5 to 12. Four times a year they gather the children of the community for a day of art, music and play in the context of prayer.

On Thursday evenings in Lent, the sisters welcome the people for an hour of guided contemplative prayer, which includes both silent prayer and communal reflection on the Sunday Gospel. It is concluded by sung Compline, the night prayer of the church.

Once a month, the Sunday congregation is invited to a mailing party. Volunteers join the sisters for coffee, buns and newsletters. By noontime, 4,000 communications are folded, addressed and bundled for bulk mail. The wide net of Carmelite influence spreads throughout the state and beyond.

Over the past 30 years, exterior changes in public spaces reflected the call to extend the Carmelite ministry of spirituality and contemplative prayer to others. The sisters began early to involve lay men and women in helping to expand the reach of Carmel. A talented architect designed a chapel renovation that brought light and warmth to the chapel and created a space for a united community of Carmelites and lay persons for liturgy. The side wall of the chapel was expanded and filled with glass. The altar was placed near the center of the newly created space under skylights, and the Carmelites and parishioners form a complete circle around it.

All of us in the pews (replaced now by moveable chairs) can see the new growth of this Carmel reflected in the countenances of the sisters who face us each Sunday at Eucharist. Most of the group was in middle age or older when I first started attending the Eucharist. Now we see younger women in the group. At present one-third of the community is in initial formation. How did this group of Carmelites succeed in attracting younger women to join them?

First, they prayed; then they planned; then they worked the plan. They realized that they needed women in their 40’s to join them before they could attract women in their late 20’s and 30’s. They had to fill that decade gap, in order to create a cohesive, multigenerational community. So they created special days of “come and see” and attracted women to visit and participate in their life. The women found a strongly bonded community, living contemporary contemplative life in a collaborative structure of governance. Result: four women in this age bracket have come and stayed. Next, they concentrated their prayer and their efforts on women a decade younger. Now three women in that age range have entered.

These women have brought different gifts to the community. Two are lawyers, one an economist, one a mechanical engineer, and two are financial managers. One is a nurse and a singer, and one is a library science professional and a dancer. One is a gifted musician who plays the organ and directs the choir, while a Mercy sister is organist. All are passionate for God and God’s people.

Do these younger women create a seismic shift in community life? Yes. Each one comes with diverse experiences; each one changes the community in some way. Balancing the two principles of stability and flexibility, the community achieves the state of equilibrium necessary for contemplation.

This balance is reflected in the logo designed for their Bicentennial Celebration, 1989-90. In its center, the foundress, Teresa of Avila, hands the torch of prayer and the fire of contemplative life to a young woman—symbolic of each new generation of Carmelites and all the lives they touch. Both are standing on an anchor, symbolic of anchoring the contemplative life in American soil.

During the bicentennial celebration, the impact of this monastery on the entire country became evident. Sisters from the 45 monasteries across the country that trace their origins to the Baltimore Carmel joined in the celebration, either by presence or prayer. Carmelite friars from across the country as well as communities of active Carmelites and over 600 lay people participated in the planned events.

The Sunday community is growing also. Persons in all walks of life find the sacramental life here enriching, and they take full advantage of that richness. The call of Carmel finds an answering echo in many hearts. We who drive down the narrow road from the monastery back to the highway each week take with us a spirit enriched by the ancient Carmelite tradition made new for our times. 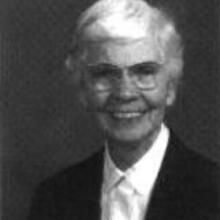