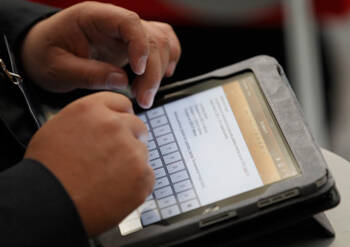 Over the past decade and a half, Apple has transformed itself from a fading computer manufacturer into an unchallenged global technology leader. Its sleek products have fundamentally altered the way people all over the world communicate, create and educate.

Is Apple, an innovator both commercially and culturally, on the verge of once again altering reality, this time on the manufacturing floor? Maybe. An investigation of an Apple subcontractor uncovered numerous violations of human dignity and Apple’s own corporate ethics code. Now both Apple and its subcontractor, Taiwanese manufacturing giant Foxconn, have promised fundamental change.

Much of Apple’s success has rightly been attributed to the vision, taste and obstinacy of its late founder, Steve Jobs. But he had a blind spot for one group of Apple stakeholders who have played an essential role in the company’s achievements—its vast manufacturing work force. After leapfrogging sites around the world, location-scouting for the most “willing” labor force, Apple settled most of its manufacturing in China. That choice has helped enrich Apple and its shareholders, but it has increasingly drawn public criticism. For all its contemporary innovation, Apple relies on an outdated industrial model.

At its comfortable corporate headquarters in Cupertino, Calif., Apple’s professional staff enjoys hefty salaries and corporate perks unimaginable to most working people in the world. But thousands of miles away, Apple’s manufacturing workers live in the 19th century, captive to Apple’s changing production schedule, sometimes roused from company barracks in the middle of the night to meet iPhone demand spikes. Workers live inside Foxconn’s vast factory compounds, shop at its stores and eat at its cafeterias, working often more than 60 hours a week, sometimes seven days in a row without rest. In China, Apple has found a vast, vulnerable work force eager to do the company’s bidding; poverty leaves them little choice.

Apple’s production grind exacts a high price from workers and their families. Industrial accidents have led to deaths and serious injuries. A wave of worker suicides at Foxconn facilities testifies to the desperation on the factory floor. Worker pay, even after recent hikes, remains less than $17 a day. Apple has so far declined to share its fat profit margins with the people who solder and assemble its magical products. With almost $100 billion in cash reserves, Apple could propel a transformation of the lives of “cheap” laborers throughout the developing world with just a minor adjustment to its profit expectations.

Toward the end of his career, Steve Jobs showed increasing awareness of this issue; and his successor, Tim Cook, has wasted no time confronting the problem. Apple took the unprecedented step recently of inviting a third-party review of standards and practices at Foxconn, its largest subcontractor and, not incidentally, the subcontractor of choice for other manufacturers, like Amazon, Dell, Microsoft, Sony and Samsung. The Fair Labor Association gave Foxconn “the equivalent of a full-body scan,” investigating conditions at three massive factories and surveying more than 35,000 workers.

Following the unflattering outcome of its investigation, the association has secured “groundbreaking” commitments from Apple and Foxconn that will reduce working hours, improve health and safety conditions and establish “a genuine voice for workers.” Nearly two-thirds of workers reported that monthly wages were not adequate to cover basic expenses. Responding to these deficiencies will move Apple closer to the minimum standards for the treatment of workers articulated over generations by Catholic social teaching—among them, a just wage, humane work schedules and conditions and the right to form unions.

There are some who are already critical of Apple’s industrial altar call, dismissing its new attention to labor standards as a public relations stunt. Others say that Apple is merely applying an ethical veneer to the market-driven evolution of China’s working people from desperate global patsies to savvy job-switchers. Skepticism is called for, but so is hope. The bottom line is that a new accountability has been accepted by one of the most powerful employers in the world. Apple and Foxconn’s commitments bring new pressure to bear on other corporations to conduct similar examinations of conscience.

This new corporate concord includes monitoring provisions that will measure compliance, but much will depend on the attitude and attentiveness of consumers in the affluent world. In this matter public sentiment emerged not out of a desire for the latest thing, but as an expression of solidarity with overseas working people most consumers will never meet. Apple—and other outsourcing U.S. corporations—would be wise to adjust to this market demand.

The Editors
Show Comments (
2
)
Comments are automatically closed two weeks after an article's initial publication. See our comments policy for more.
Jerome Riggs
10 years 3 months ago
Having had 16 years of Dominican and Jesuit education, I am continually amazed by the disconnect your editorials have with the real world. Not only do they seem to be anti business and simplistic in their premises, but they do not address the real problems.

In Steve Jobs recent biography he stated during a meeting with President Obama that Apple had over 700,000 workers employed in China building their  product. He gave two reasons for this. One, that is was impossible to get a manufacturing plant approved and then forever to get it built. The second reason, was that they needed 40,000 engineers, and you can't find those in the US because of our disasterous union controlled public education monopoly system.

Jobs gave no suggestion for the first reason, but I have one. His suggestion to reform the education system was to treat teachers like professionals, with compensation based upon performance and not treat them like assembly line production workers.

As for building manufacturing plants in the US, it is almost impossible to get through the maze of environmental studies, and then the numerous delays and cost in getting the plants built. The EPA, encouraged by environmental organizations, whose main mission is the net decrease of the human population, promote these endless delays, thus making the costs of development prohibitive.

I have been to China recently, and the people are  energetic, dedicated, hard working, and family oriented. Apple has given them a great opportunity to improve their life and working conditions. But it takes time. I have seen the same in Baja California, which I visit often. Since NAFTA, the economy there has boomed, and the working class has greatly benefited.

There was a time when the press was giving Bill Gates of Microsoft a hard time for having billions and giving so little away to charity. He stated that he intended to begin giving, but it was harder to determine the best and most effective way to give, then it was to run his business.  I would say he has done well.

I am a conserative, and I have a sister who is a religious. When discussing the Obama "tax the wealthy" proposal, her objection was that if we did not pass the tax, the wealthy would just spend it on yachts. I could not disagree with her more. My experience is that successful business people are "good and honest" people, or they would not stay in business. I trust them more to help the poor and spend their money wisely, then I trust the Big Government machine we have created.

Craig McKee
10 years 3 months ago
"Now both Apple and its subcontractor, Taiwanese manufacturing giant Foxconn, have promised fundamental change."
BEFORE the promise:
http://gizmodo.com/5542527/undercover-report-from-foxconns-hell-factory
MAKING the promise:
http://www.bbc.co.uk/news/business-17584523
Yes, and we've just gotten an upclose look at the nuts and bolts AFTER this promise here on TV in Hong Kong:
http://programme.tvb.com/news/pearlreport/video/739/128769
There's a REASON Steve Jobs never set foot in China....