The Littlest Way of Lent 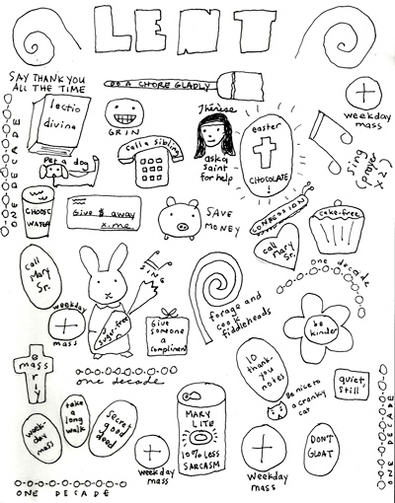 For two or three consecutive years in grade school I got a handout at the beginning of Lent. It was a millionth-generation chart of sorts, handdrawn by someone in the 1970s, most likely. It had little pictures of eggs and jellybeans with little hand-written suggestions in them. The idea was that you'd do a deed a day, then color in the picture. By Lent, you'd be looking at a full-color picture of everything you'd done.

Here began my love of Lent. Lent meant that my mom would take me early to school and go to Mass with me—just the two of us—and as, the youngest of six, that was reward in itself. I liked doing quiet good deeds. I tried to be kind to those who persecuted me. I gave up sugar for hours at a time, and come Friday, piled in a car with some of my brothers to get Filet-O-Fishes at McDonald's, where I annoyed everyone by insisting on having it plain, which held everything up. It occurred to me that just getting the sauce might have been the "bigger" thing to do, but then I wouldn't get anything to eat. Plain it was.

I even took my Lent chart along when we decamped as a family for Easter Vacation (now known as "spring break") to a nearby island. Having fun didn't mean I was going to let up with my program. Then, I could secretly complete it and enjoy the pale rays of the Easter sun secure in the knowledge that I'd earned it. Easter morning, I'd eyeball my chocolate, make sure no one got one egg more than I did, and, after Mass, celebrate a one-girl chocolate bacchanal.

My point here is that Lent doesn't have to be so difficult. Take it one day at a time. Here's my personal chart for the season. These things might not seem too ambitious, but small goals are still goals, after all: consider it the "Little Way" of Lent.  Why not make your own chart? When Easter comes, you'll feel so good. Then, there's a ton of chocolate.

Mary Valle is featured the in new book The Moment: Wild, Poignant, Life-Changi